Something to Say: The Art & Life of John Berry 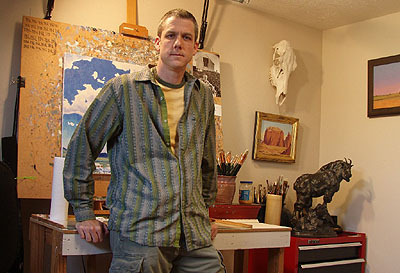 John Berry in his Logan studio.

“This is what I am and this is what I do: the land and the desert.” Those are the words Cache Valley illustrator-turned-artist John Berry uses to sum up how he feels about his art, which portrays the sparse, light-infused desert-scapes of Nevada and Utah. Berry made the transition from illustrator to artist after realizing that illustration did not convey or represent what he wanted to say through the medium of visual art. This transition led him to find a subject for his paintings that embodied what he knew and who he was.

Berry grew up in the Reno, Nevada area and later went to Brigham Young University (1988-1992) where he studied illustration. He worked as a freelance illustrator from 1994 to 2002, but around 2000 he began experimenting with fine art painting. As he experimented, he searched for the particular subject matter that would fit his emerging style and his personality. He remarks that it was the time he spent away at school and in pursuing illustration that eventually brought him back to the desert of his youth. “I played around with what I wanted to do after I knew I wanted to move away from illustration; I even tried to paint the kind of lush, green canyons that I fished in. I was looking for a subject that would say what I had to say, but even at that time I wasn’t sure what that message was. I would say to myself, ‘I’m a middle-class kid from Reno, Nevada, you know, out in the ugly desert — what do I have to say?’ But finally I realized that the desert is who I am and in painting it, I did have something to say.” 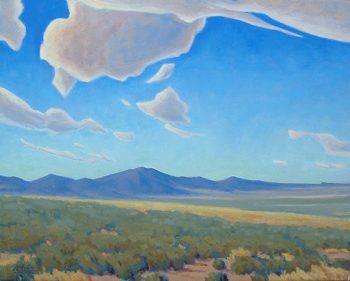 Even after this realization about his so-called “ugly desert,” Berry still wasn’t euphoric about the idea. “It was only after I really spent more time out there, after I had been away for twelve years, after school and the stint in North Carolina, I came home and delved into the land and it dawned on me that I was happy with the desert representing who I am and what I want to convey in my art work.”

Berry’s goal was to make the move from conceptual illustrator to independent artist a gradual transition, so that the money from his illustrating jobs could help finance his evolution as an artist. However, his plans were interrupted when, after September 11th, 2001, the number of available illustration jobs sharply declined. This sudden drop in the market made a quick transition necessary. “In a way, that falling-off after 9/11 kind of threw me headlong into my own art. And I had to figure out what I wanted to do, and what I personally wanted to say.” Part of the advantage, he notes, of being an illustrator, is the chance to collaborate with other people — primarily art directors — and essentially interpret their ideas within the parameters and guidelines they set. “When I worked in illustration, I interacted with art directors. You played around with ideas; you had people to bounce ideas off of.” Berry admits that it was difficult when he first began painting but necessary to “dig deeper” into his own self and begin to paint what he believed was important. Thus not only did he begin to experiment with landscapes as subject matter, but he studied with artists such as Matt Smith, Scott Christensen, and Ralph Oberg in order to master technique and learn about oils, “As a conceptual illustrator, I was used to working with acrylics, so I had to learn all about using oils and also study technique more in-depth.”

Berry’s first forays into painting the sparse, parched, and bleakly beautiful lands of rock and sand were attempts to copy and capture. “I definitely went through a documentary phase, where I was more into copying what was there on the land than in representing what the essence of a place was. I used to take pictures and sketch a lot when I was out in the desert, but now I’ve moved away from that. My goal now is to express the essence or spirit of an area, rather than just reproduce it. That’s the direction I’m heading in.” Now, his work may merge material from different areas into composite landscapes, using a representational style that he believes better conveys the essence of the desert and the West. 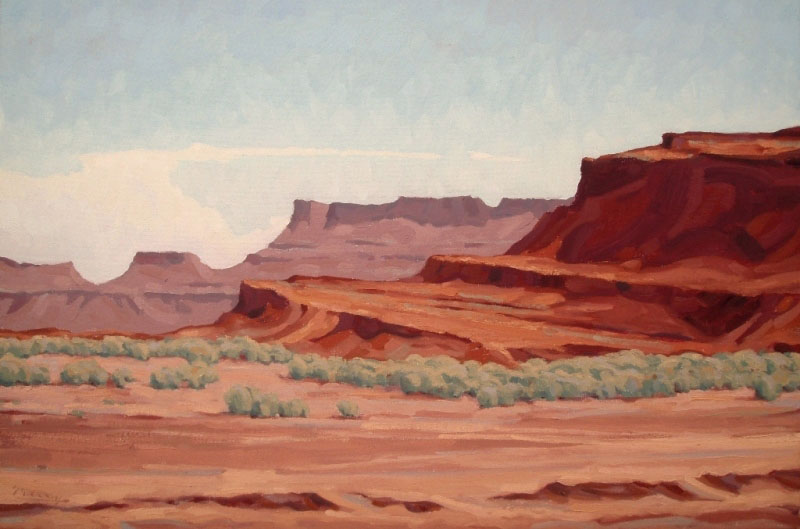 And what does the desert represent? “Starkness, light and color — that is the desert.” Berry’s paintings, in seeking to convey the spirit of the desert land, convey a sense of space and stillness through a minimization of clutter in their composition. Berry himself asserts that his representational paintings are meant to be “stripped-down and simplified to the bare-bones, the essentials. I pay close attention to detail, but I don’t stick in details just for kicks. Nothing that is not essential is included.” His paintings present the play of light and color in the desert, while also imbuing the land with a sense of permanence. The rock-scapes that often make up his subject matter are juxtaposed with ephemeral clouds and the transitory shadows in the crevices and folds of buttes and rock formations. These contrasts of the land, light, and sky help to reinforce the solid sense that the desert always remains. Despite the ebb and flow due to the changes in weather and changes in light from day to day, the desert changes so gradually that it may not be evident within the frame of one lifetime. 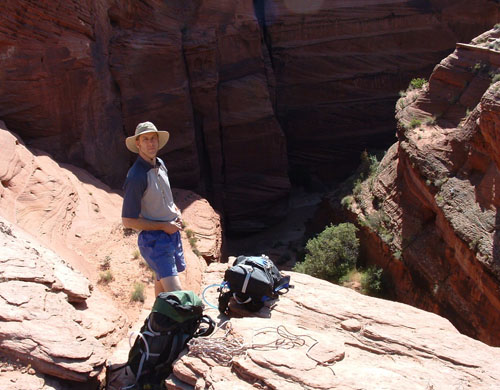 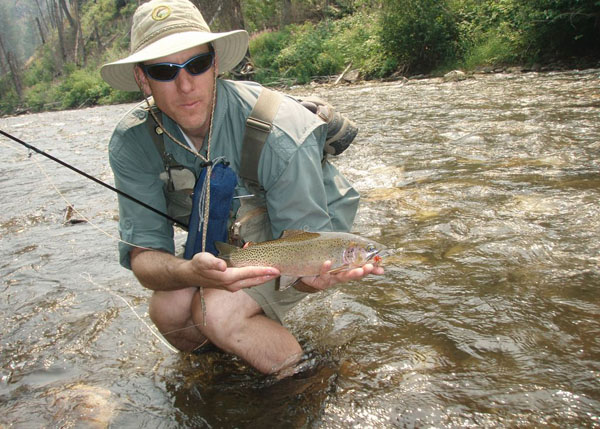 In addition to painting wild and rugged landscapes, Berry enjoys spending time in those environments. His interests include fishing,|6|backpacking,|8| and rock climbing. He has learned, however, that his artistic endeavors and his jaunts in the great outdoors sometimes need to be compartmentalized. He says that wherever he goes he finds inspiration, but mixing a fishing trip with a painting trip usually doesn’t turn out well for either activity. “They are different loves,” he chuckles. “I’ve learned that I either have to go on a trip to paint and not to fish, or to fish and not to paint.” This artist and outdoorsman also defines himself as having a mixed personality. When asked whether he is an introvert or extrovert he replies, “Recluse? Yes. Outgoing? Yes. I have both sides. I guess that means I have sort of a dual personality. Depending on the people I am around and the situation I am in I may be quite reserved, or I may be dancing with a lampshade on my head.”

When asked where his art is headed, Berry frankly states, “I don’t know. We’ll see. I’m not concerned with forcing my art to go in a certain direction. It flows and evolves and I’m not going to worry about it; mostly, I’m just going to worry about doing what I love,” and adds with a laugh, “and getting the right paintings in front of the right people.” He will still occasionally take an illustration job, usually one or two a year, but illustration has long ceased to be his main focus. Yet, he is grateful for many of the skills he picked up during his illustration days. “As an illustrator, you work with people and deadlines. You have to have self-discipline to get things completed on time, and you’ve got to be able to get along with people. I’ve learned how to set goals for myself, both long term and week-by-week. Also, working with an art director on an illustration job is a lot like working with an art gallery; the business aspect of illustration was good preparation for managing my own studio.” 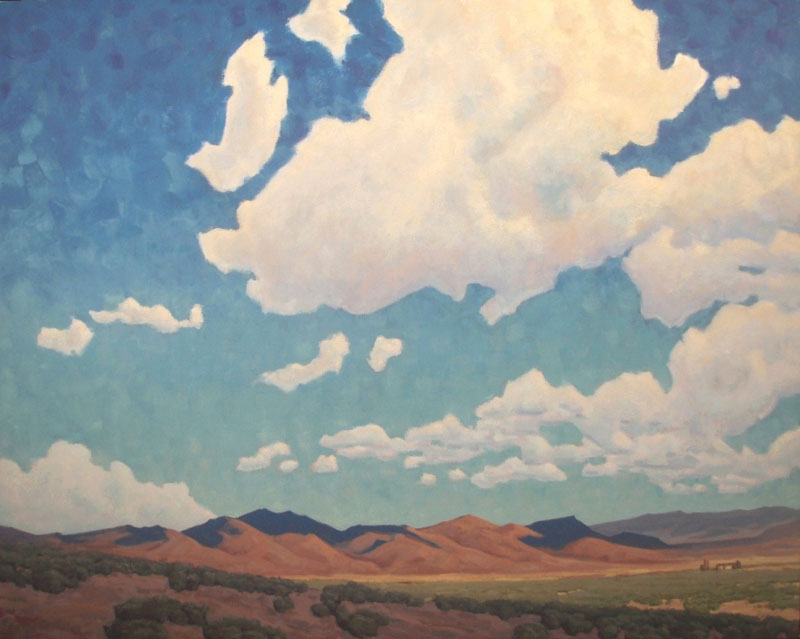 In addition to learning from his own career as an illustrator, he also gains inspiration from the lives of illustrator-turned-artists who have come before him, such as Maynard Dixon, Harvey Dunn, and A.J. Casson. However, Berry is intent on carving out his own niche; he is interested in developing his own style and voice. “The best thing I can think of is when people can recognize your paintings because you have a distinctive style, and then, when they also understand what it is you’re trying to do in your paintings.” The influence and examples of previous artists are vital, but Berry emphasizes the need artists have to develop an individual, honest style that isn’t just trying to meld or mimic those of other artists — a style that reflects the essence of the ideas behind the paintings. He sums up his philosophy of art when he paraphrases one of his heroes, Harvey Dunn, “Paint from your gut; paint what you know, believe, and love.”

John Berry is currently the featured artist at Williams Fine Art. Some of his works may also be viewed in two upcoming shows. His work, “Jack’s Valley” |7| was chosen for the Springville Art Museum’s Spring Salon; two other works have been selected for the traveling exhibit “Zion National Park: A Century of Sanctuary.”|9| You can view more of his work at his website: moosejawstudio.com. 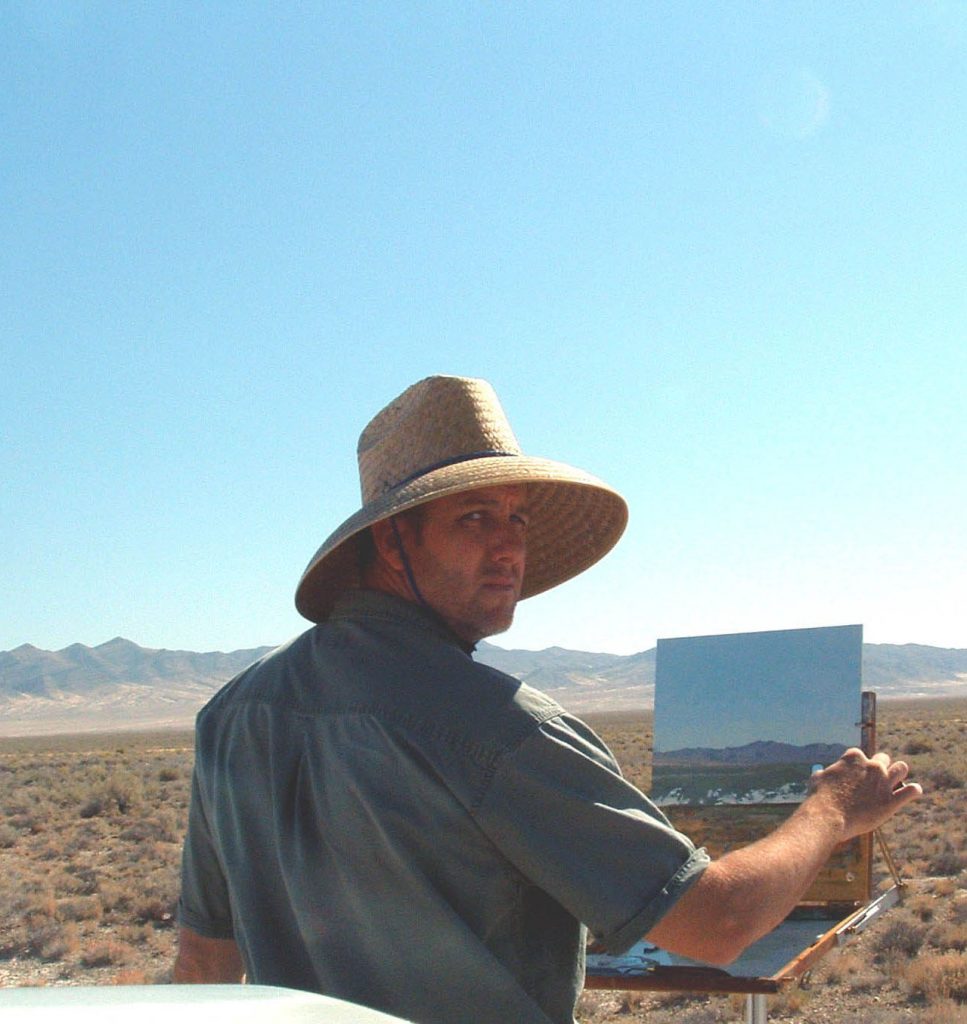