Friday evening, at the Utah Arts Festival in downtown Salt Lake City, seven of the city’s most creative will be heading to the Festival Stage to accept a 2022 Mayor’s Artists Award.

Since 1992, the awards have honored artists and art organizations who, according to the city’s press release, “have deeply enriched the cultural landscape of our City and the lives of our citizens.” In the past, awards have been given in specific categories, but this year’s awards were open without regard to individual categories.

Cheer on and congratulate the following at 7 p.m. at the Festival Stage:

Breaking Barriers: A Cultural Accessibility Project is a partnership between Art Access and the Utah Division of Arts & Museums to provide disability accessibility training and mentorship to our state’s cultural institutions. Participants develop accessibility plans that address immediate as well as short and long term deficiencies in their organizations to become more accessible to the disability community. Since its inception the program has trained 58 organizations and over 200 individuals. 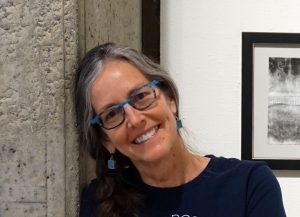 Sandy Brunvand is Associate Professor Emerita in Art Teaching at the University of Utah, now retired. She has won multiple awards for her career as an artist and an art educator, including the Utah Art Education Association’s Utah Higher Education Art Educator of the Year, 2017. Her career as an art educator has included 13 years of K-12 teaching in public schools. Most recently, Brunvand is creating a new artistic animal advocacy entity that is still in its early stages, PaperInkPaws (see our profile of the artist from our Utah’s 15 project here).

Fanny Guadalupe Blauer is a Mexican immigrant and identifies herself as a storyteller. She is the current Director of Artes de Mexico en Utah, an organization dedicated to the creation of art and the appreciation of the Mexican identity, historical connections, and living traditions. Fanny is a co-founder and leader for the Diversity and Inclusion team at the Natural History Museum of Utah and has acted as a community liaison and cultural interpreter for several museums in Utah.

Jorge Rojas is a multidisciplinary artist, curator, and educator. His combined practice directly align with his passion for working with communities towards racial and cultural justice. From 2015-2021, Rojas served as director of learning and engagement at Utah Museum of Fine Arts. Rojas studied Art at the University of Utah and at Bellas Artes in San Miguel de Allende, Mexico. His work has been exhibited internationally (see our profile of the artist from our Utah’s 15 project here). 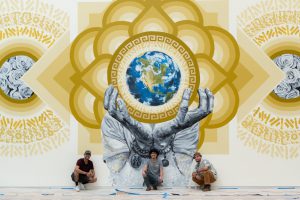 Miguel Galaz, Alan Ochoa, and Luis Novoa of Roots Art Kollective in front of their mural at the Utah Museum of Fine Arts

Roots Art Kollective (RAK) is composed of three Mexican American artists Miguel Galaz, Alan Ochoa, and Luis Novoa. RAK’s mission is to expand public art to create a vibrant environment that allows people to learn about the cultures that enrich our communities. RAK takes inspiration from their roots as well as their diverse individual interests such as calligraphy, ancient motifs/patterns, and the natural environment (see an article on one of RAK’s murals here).

More information on the 2022 Mayor’s Artist at https://saltlakearts.org/mayors-artist-awards/