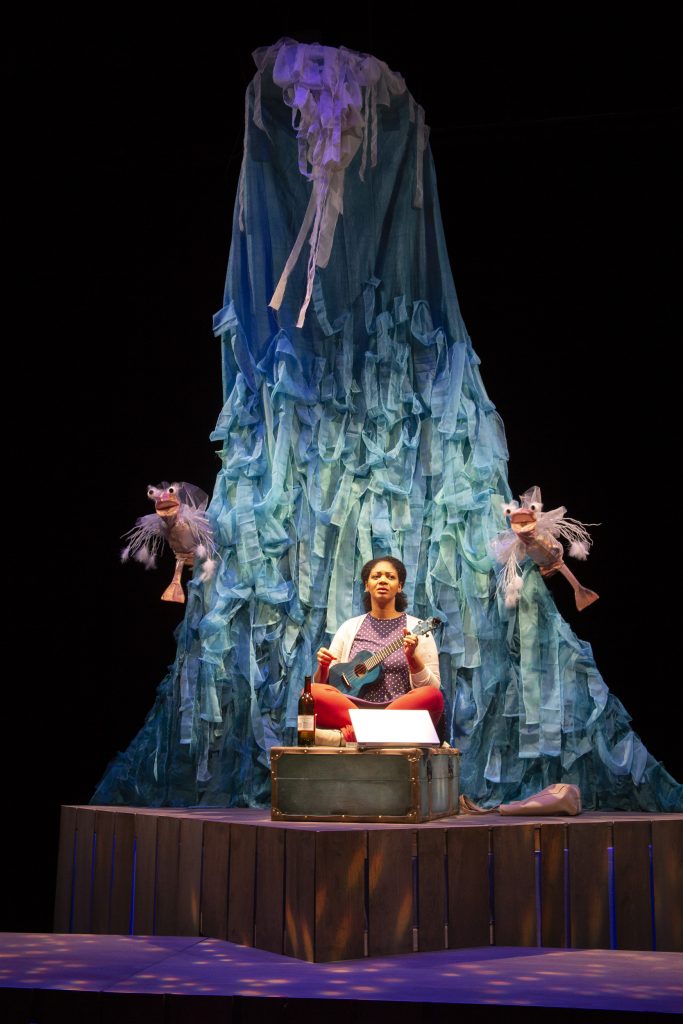 The world premiere of playwright Jenny Kokai’s and director Jason Bowcutt’s Singing to the Brine Shrimp (at Plan-B Theatre through February 23) gives the Salt Lake City public a funny and insightful look at belonging, culture shock, and silliness in the art world (for more about the play, see our preview here). The diverse and almost-all female cast and crew make refreshing decisions about the set, costume design, sound design, and acting. In fact, the play’s 100% woman stage crew, Kokai says, was an inspiring experience to bring together. With a script rich with deadpan humor and characters that comment on the elitist attitudes and people in the big-city art world, the play is timely, entertaining, and more than a little meta.

Shimmering and swaying with the brine shrimp puppets, the central set for the Great Salt Lake is a long construction of flowing blue fabrics. Set designer Maddy Ashton has made functional and whimsical decisions that highlight the fairy-tale quality of the production and make the play engaging to watch. Her experience setting the stage for Seusical, Cinderella, and Matilda is reflected in some of the more cartoonish aspects of the set, which feel fun and faithful to the madcap plot elements in Jenny Kokai’s script. The use of one of the central props — a playwright-appropriate suitcase that allows Allison to disappear between scenes — helps the plot flow seamlessly.

The puppets’ design by Shelby Rickart balances the need for simplicity with the need to express the main aspect of the puppets’ characters. Design choices for Huck and Chuck portray the more negative aspects of hipster artists well, with little sunglasses and thin facial hair as icons of silly elitism. The brine shrimp are googly-eyed, sparkly, and adorable, making it easy to be entertained by their floaty movements and bitingly funny social commentary.

This overarching simple-yet-effective approach is also apparent in costume designer La Beene’s choices. One standout example a costuming choice was worn by Emilie Starr as the theater producer Bianca. Starr totally transforms with the aid of a pair of glasses and a massive wraparound scarf. The scarf’s ridiculous size reflects a bit of high-brow fashion, that she is cold in temperature and temperament, and that she just might have a tightly wound disposition. The scarf adds humor and depth to Bianca’s character in a subtle and smart way.

Starr’s acting range and ability to morph between sock puppet, Bianca, and Dinah are impressive and make each character feel unique. Her voice as Bianca is clipped and small as she belts it out in the brine shrimp musical number, and then gets believably emotional as Dinah. “The Idea Song” is a funny and well-timed number featuring Starr, Jay Perry, and Lily Hye Soo Dixon. Dixon and Perry are also challenged with creating unique voices and expressions for several Brine Shrimp characters. Dixon plays a brine shrimp, Quinn, Lorina, and Lucy. Her cool-girl drawl as Quinn is funny before you even register her lines. Dixon’s high-anxiety phone calls as Lorina are faithful to the fast-paced city personalities that pepper cutthroat art environments. Perry plays Huck, Chuck, Royston, and Ryan, and is responsible for making mansplaining and artistic priss seem both natural to the characters and as cringeworthy as they’re meant to be in Kokai’s script. Each of these multidimensional actors, in partnership with Bowcutt, makes the play bubble with sarcastic charm.

Latoya Cameron creates a simultaneously funny, clumsy, and timid Allison, with good vocal projection and tone during her singing scenes. Her performance helps the audience follow the emotional development of Allison and empathize with her outsider status, first as a Utah transplant and then in the New York workshop. Cameron was a perfect choice to carry the majority of the play’s plot.

The overall production, including the catchy songs by Kenneth Plein, is coherent, timely, and entertaining. The cast and crew have created a play that will both resonate with your desire to belong and make you laugh at yourself, the art world, and notions of “being cultured” in general. 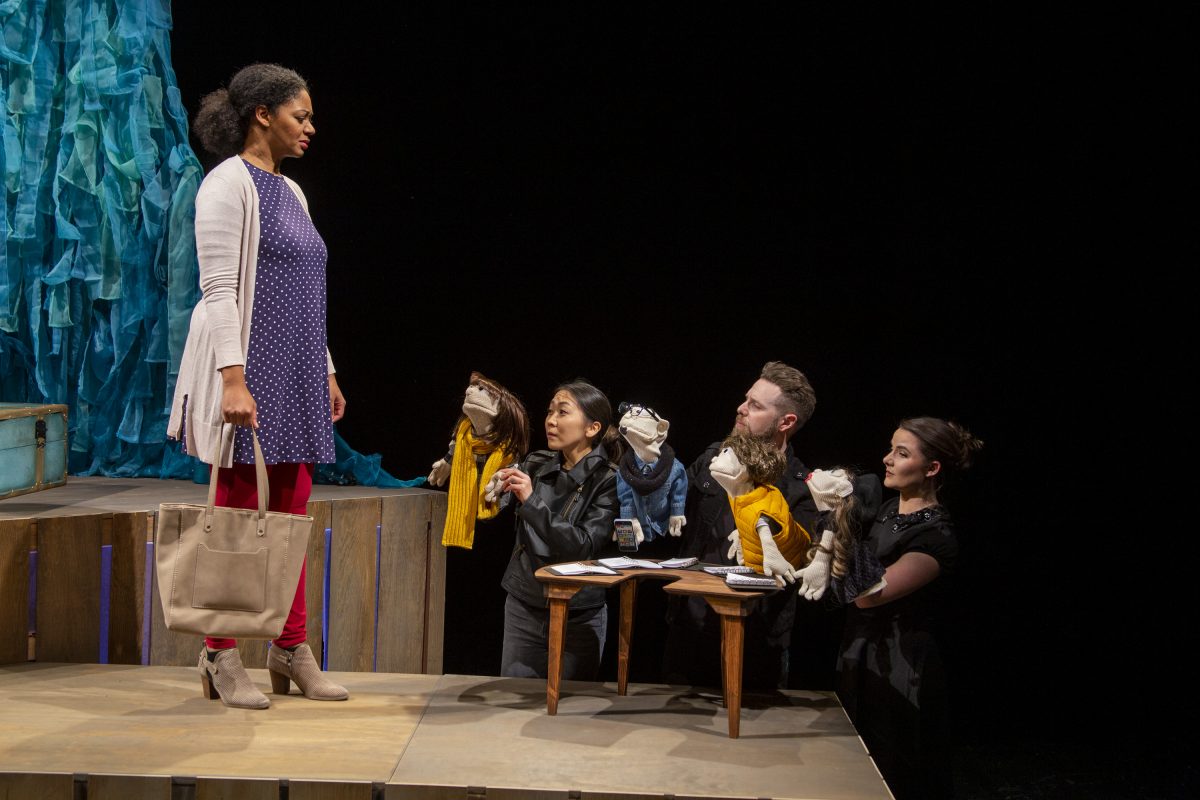