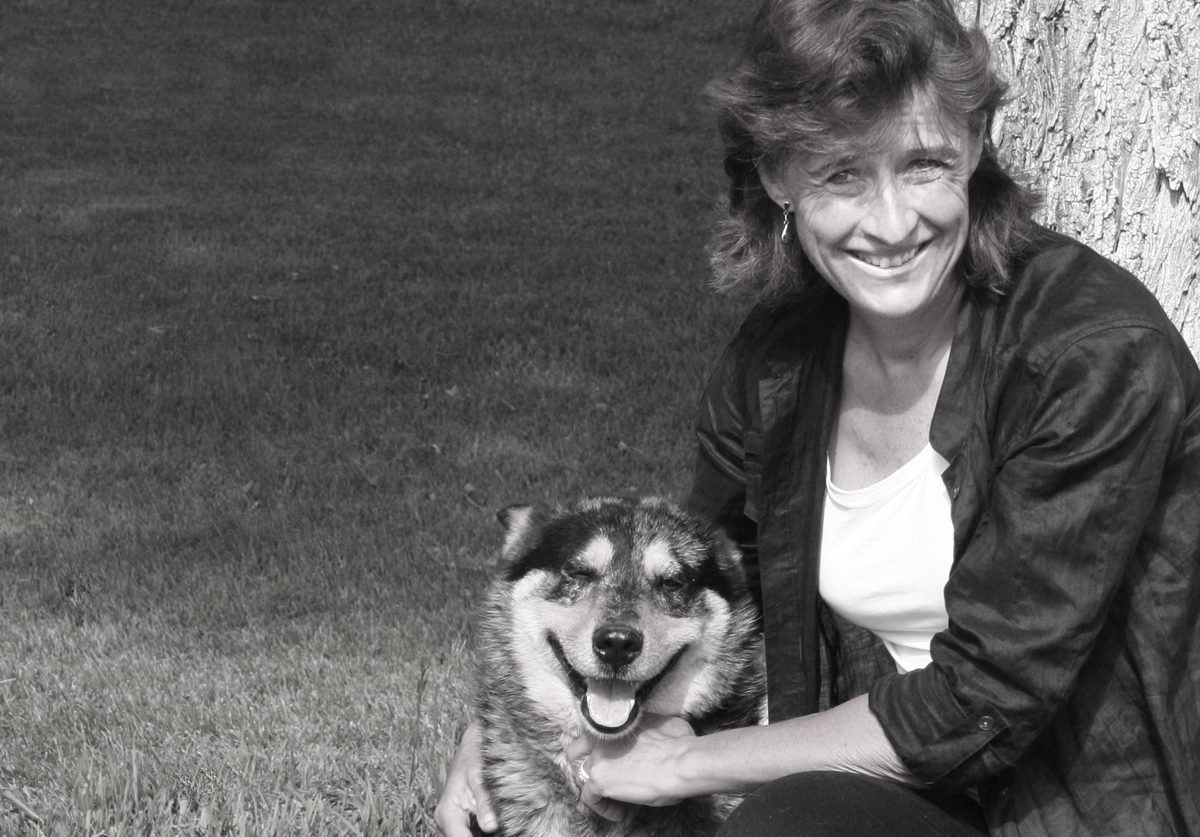 When we arrive at Silvia Davis’ house in Teasdale, Utah, we are greeted by two calm and friendly dogs. They don’t belong to Silvia and her husband Paul , they just like their place. It is a charming, peaceful setting, with an old gingerbread-trimmed house set back from the road, Silvia’s studio to the right of the driveway, her husband’s studio behind it, and two large piles of wood alongside the two studios. One pile heats Paul’s studio in winter, the other is Silvia’s rescued barnwood from which she creates sculptures.

These sculptures are well-know among afficionados of the Utah art scene. Davis has been commissioned for works in public all over the state, and has exhibited almost every year since 1982. She works primarily with wood and bronze, sometimes in clay. Her wood sculptures of cats, dogs, horses, and inanimate objects are staples at Phillips Gallery in Salt Lake City. Her bronze works have a good market in Santa Fe. Davis grew up in Utah and got her undergraduate and graduate art degrees at the University of Utah, where she met her husband of thirty-one years, Paul Davis. Both are established artists with successful art careers and their contributions to the art community have included teaching as well as making art. They own a studio in Helper (see page 5), where Paul has often worked with David Dornan (another well-known Utah artist), but make their home in Teasdale, a small community at the foot of Boulder Mountain.

After greeting the visiting canines, we take a brief tour of Davis’ studio — the tool room, occupied by several large machines necessary for processing her materials, and the main space with several works in progress, smaller tools, bulletin boards, and objects acquired at antique shops, yard sales, etc. An old pair of leather boxing gloves await the day she decides to carve a sculpture of them. She points out the barnwood outside the door and the partially completed large dog inside. 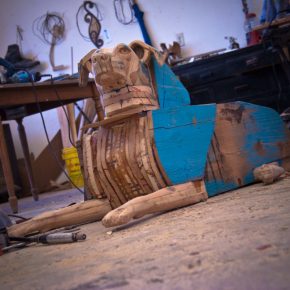 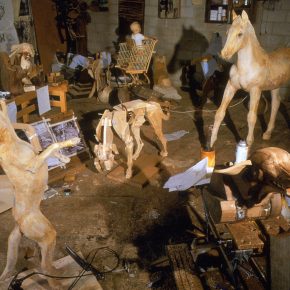 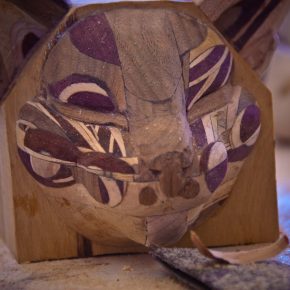 “I like barnwood because it’s probably been weathering for a hundred years, and it’s lived as a tree then as a corral, barn or fence , somehow found its way to me, and I pull out the nails, plane it down, and work its way into my pieces.” Referring to the dog inside, she describes how she might paint the barnwood blue, laminate it into the work with other boards, then carve the block out so that the patterns and colors evolve from the inside out. She shows us two or three carved cat heads and explains that when making an animal, she’ll work on the head first, and if she likes it, will create the rest of the body. If not, she’ll set it aside until she can take another look, maybe take it apart, use fragments in other works, or rework it until she’s happy and can move on to the body.

A piece like the dog she’s working on now takes about six weeks to complete. “I’ll work on the head for one to three weeks, it might evolve easily, or it could be a battle, a total struggle, something I chop up a half a dozen times before I’m happy.” She adds that years and years of experience are compressed into that six weeks.

When she was about four years old, Davis would sit under a tree all day and …“make things.” “I would go down to the dime store and buy a model. I couldn’t read yet, but I’d look at the picture and figure it out. It might not be right, I might make a mess of the glue, but I would work on it, and put something together. I was constantly tinkering and making things from paper, mud, sticks and clay, and looking at things and making animals, just making, making, making — painting, drawing, building.” When she took the required sculpting class in her art program at the University of Utah, she realized that what she’d been doing as a child had a name: sculpture. She immediately knew who she was. After finishing her bachelor degree Davis continued with a Masters of Fine Arts and has been sculpting ever since.

When I ask about the patterns in her wood pieces, their natural color, the grain, or the colors she’s painted the wood before sculpting, Davis acknowledges that deliberate intent, happy accidents, and material from the unconscious are all part of the process. “I plan arbitrary chaos into it. In building up and breaking down, adding and subtracting, allowing failure, I get this kind of back and forth surprise – a vitality. It comes from one simple move at a time repeated in such a way that it builds. I can stop and assess. There’s a process in making an animal where suddenly it seems it has a life of its own, and I wonder, ‘Where did that come from?’ I’ve made the piece – it’s mythical to me, and I see something emerge that probably I saw some time in my life and internalized, and now it’s come out.” 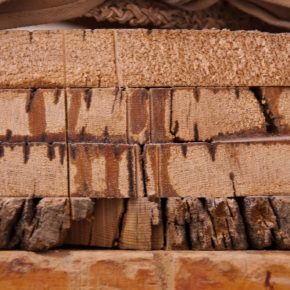 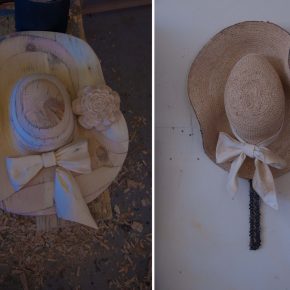 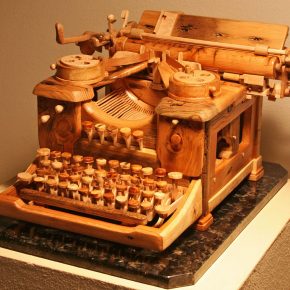 We see a block of laminated woods and she describes its making as “constructing a palette.” She has a box of pieces, small blocks of layered woods, differently colored, creating interesting shapes and patterns, made from parts of already-created works, or made by playing with left-over bits and pieces, cutting them in different directions. “I could cut this piece in a certain direction and then look at the other side and think ‘ooh, nice’, so I’m open to the possibilities that present themselves. Maybe I’ll cut it in another direction and it might become part of the forehead of the dog. Here’s a piece of an ear that got cut back – you can see the triangular shape of the ear. Maybe I’ll get that into the hat. With time and experience, when you’re working figuratively, it’s like having a blank piece of paper filled with infinite possibilities, and as you start to work, the closer you get to finishing it, the more it tightens up, the more you can lose it. I can work on a head and think ‘this has to be good – I’ve worked 5 days on it’, and then get outside myself and realize that it’s not working, so I take a deep breath, chop it up and trust, TRUST, that it’s gonna come back again, stronger, faster, better. It took a long time to get to where I have that kind of confidence. Once I could invite that in, I could look inside the destroyed piece, maybe think that was more interesting than what was happening on the outside, and take that and move it to the outside, build it right back up, try again.”

Silvia’s work requires physical strength, so she follows a two-hour work-out regime before the six hours a day she puts into creating. A lot of the process involves contracting her body (using chisels, chainsaws, grinders, mallets), so periodically she uses the inversion table in her studio to loosen her back. Her creative process is also cerebral and meditative, as exemplified by her description of what goes on when she chooses to create, in wood, a mechanical piece such as a typewriter, sewing machine, or bicycle.“There’s a kind of attraction to looking at something that’s very complicated . . . staring at it, quieting my mind, allowing it to solve the problem for me. I can sort of observe it offering me ideas – how to translate what I’m seeing into a sculptural solution. My mind takes something complex and filters and reduces all that complexity into a series of single moves, so I can see my way through to the center of the piece and find what the first move is, what the first piece is, what’s the next piece and next move. I might not get it right the first time but once I get kind of plugged in there’s an incredibly pleasurable experience that happens in that groove — my brain starts solving problems, telling me go here, go here, go here. And the piece starts to build. That’s the journey of my mechanical pieces. In using transformative material, the old barnwood that had its life, visible in the cracks and knots, and the sense of time that’s imprinted on it, I hopefully can pull out a sense of transformation from the metal into wood and bring a see-it-again-for-the first-time experience of that object – that utilitarian object.” 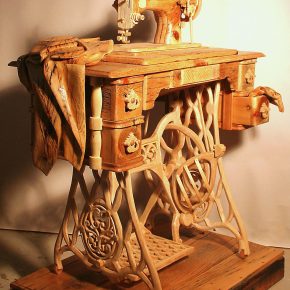 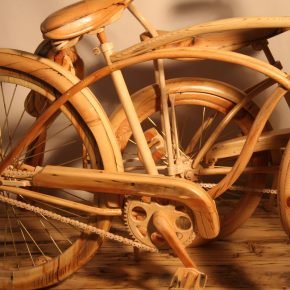 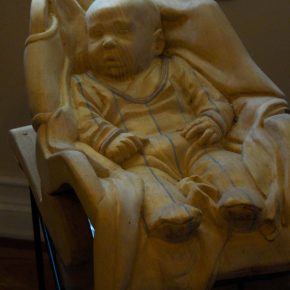 Davis invites us into the house, which showcases her sculpture and Paul’s paintings. In the front room I spot a carving of an infant in swaddling. It brings to mind a display of developing embryos at the recent Body Worlds exhibit in Salt Lake. She saw the show, says it blew her away – the synchronicity of everything that goes on with the body. On another wall is an earlier sculpture of a cat on a ledge, the one in a series of similar works she managed to hold on to. She likes it because she had used wood from antique furniture that had been painted, and ‘collaged’ it into the form. She’d like to start hanging on to more of her pieces, she tells us. Off the kitchen area is a staircase, designed by Silvia, with a pair of carved sneakers on the lower landing, looking as if someone had just kicked them off before going upstairs. The decorative panels in the banister are her creation. 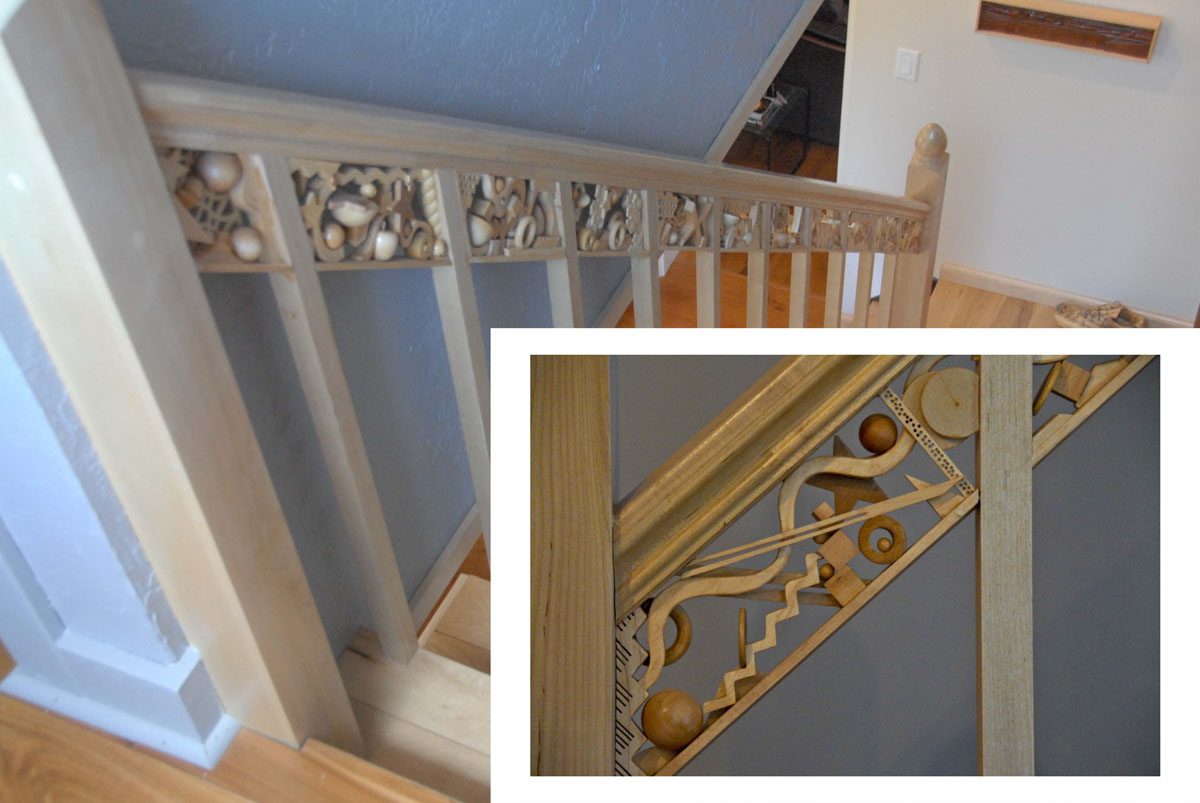 The tour completed, we are heading for the car when we hear a high-pitched whirring sound behind us. We look back, and there is Silvia, back at work smoothing and contouring a lady’s sun hat decorated with a flower.

Silvia Davis recently published a book of her sculptures at Blurb.com. Go here to preview and order a copy. Her work can be seen at Coda Galleries in Palm Desert and Park City, Meyer East Gallery in Santa Fe, Gallery B in Lexington, KY., Torrey Gallery, in Torrey, UT, and Phillips Gallery in Salt Lake City. A recent cat sculpture was in this year’s Springville Salon, and both wood and bronze sculptures can be seen at the Torrey gallery. A typewriter, which was recently part of the Untitled show at Rio Gallery, is now on display at Phillips Gallery in Salt Lake City.