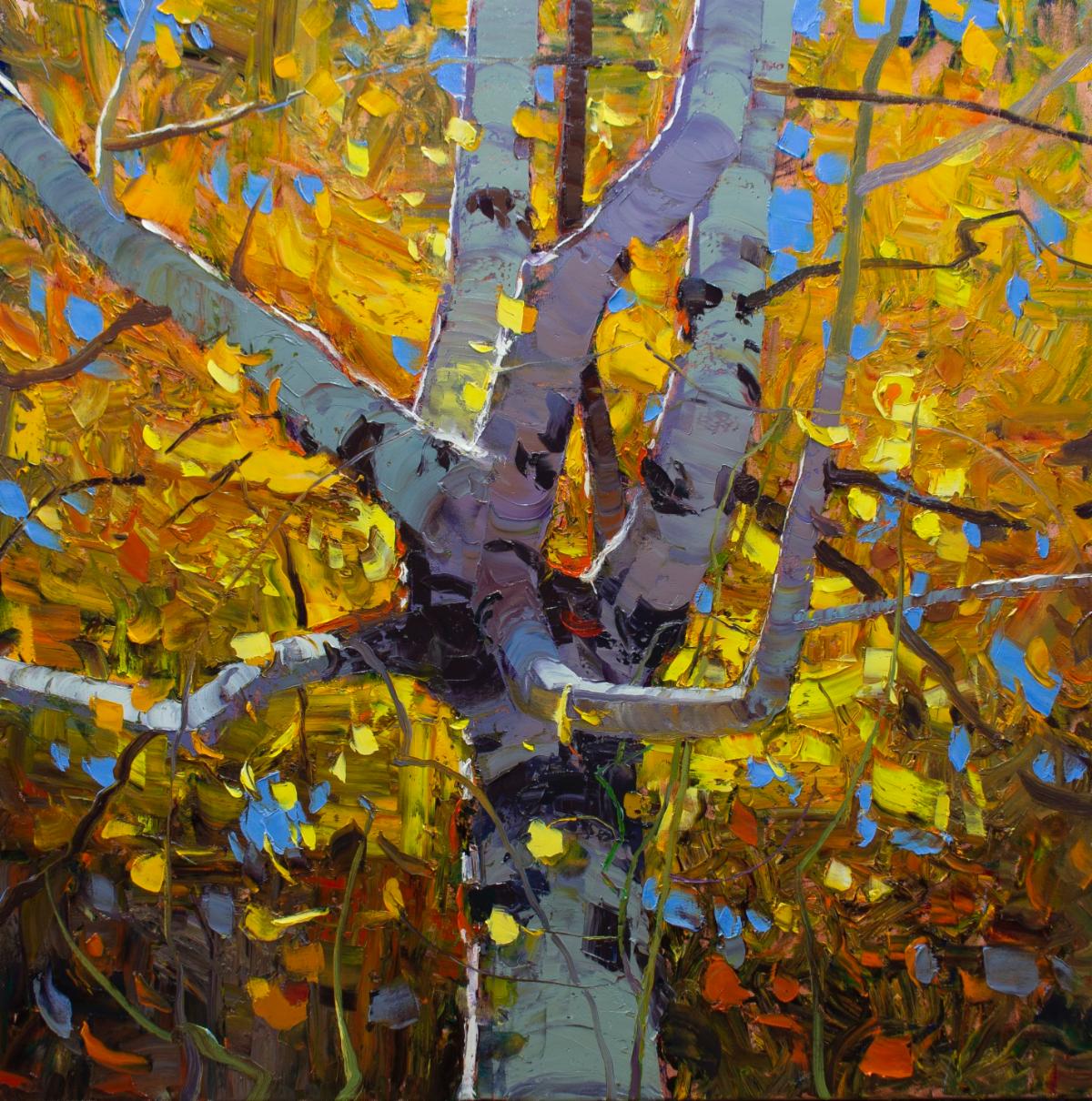 If ever a group of paintings of trees could bring you close to tears, it might be these paintings by Silas Thompson, in his new show, The Hidden Forest. Thompson, still a young painter, is a sort of forest spy/messenger. One who can be trusted, because he resists the falsely sweet: in many paintings he could have shown only uplifted, arching, straining-toward-the-sky tree branches, making those images only serene, reassuring. Instead, in “Deep Within,” “Sometimes” and “The Way Back Home,” his trees have spindly branches downward-headed, with almost ugly ferocity — nothing quaintly pretty about them— under-boughs growing toward ground instead of sky, complicating terrain for foxes, badgers, weasels. These trees are like skiers with dozens of poles, who’ve decided to stay grounded, sit in the lodge and let flamboyant fools go out on the slopes.

Thompson’s impasto work, at Meyer Gallery, is about the thicket. A thicket is likely full of prickles and brambles, plants protecting themselves and their terrain with sharp points, lowering the possibility of anyone disturbing their natural kingdom. But here and there, natural clearings emerge. 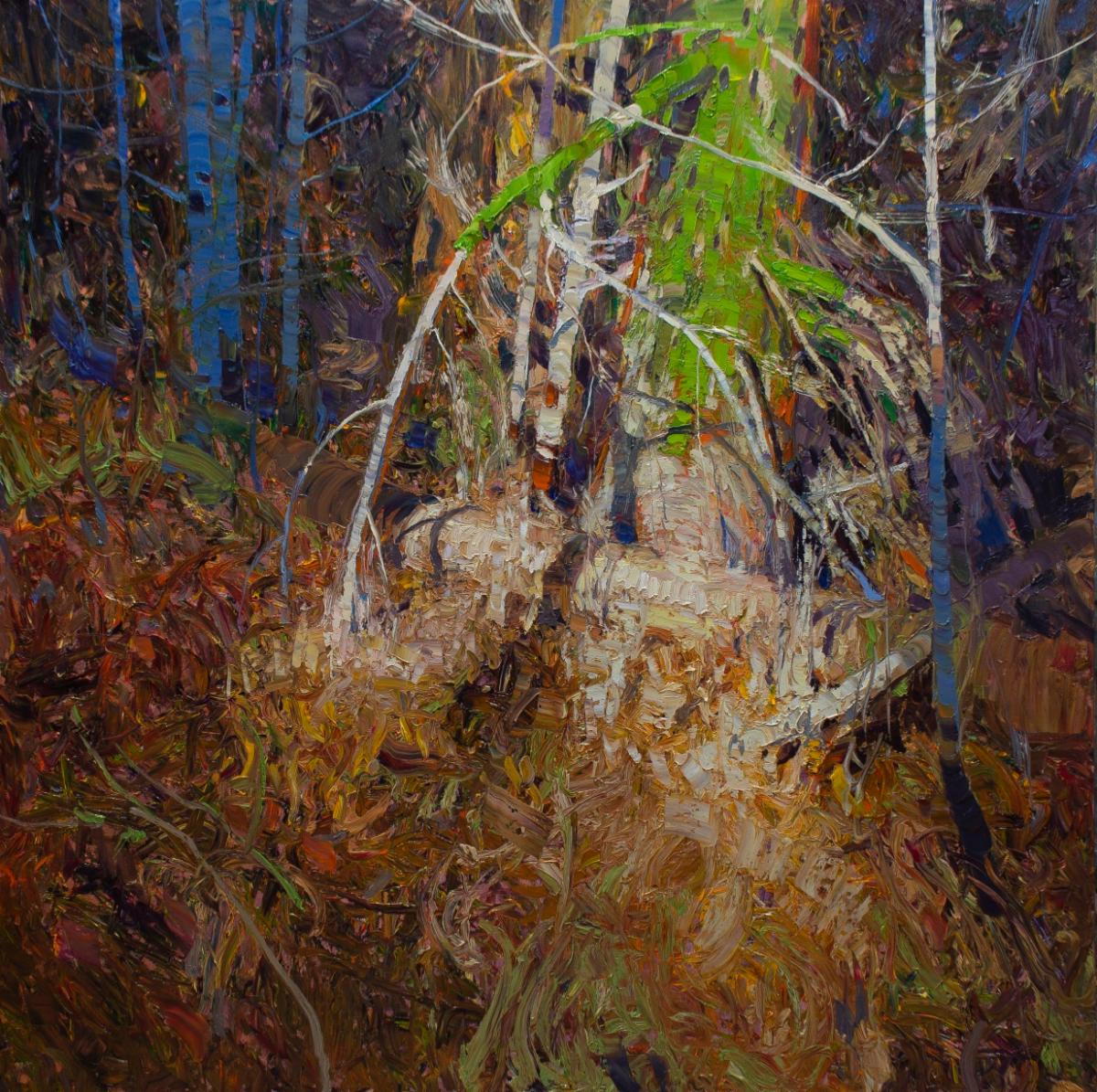 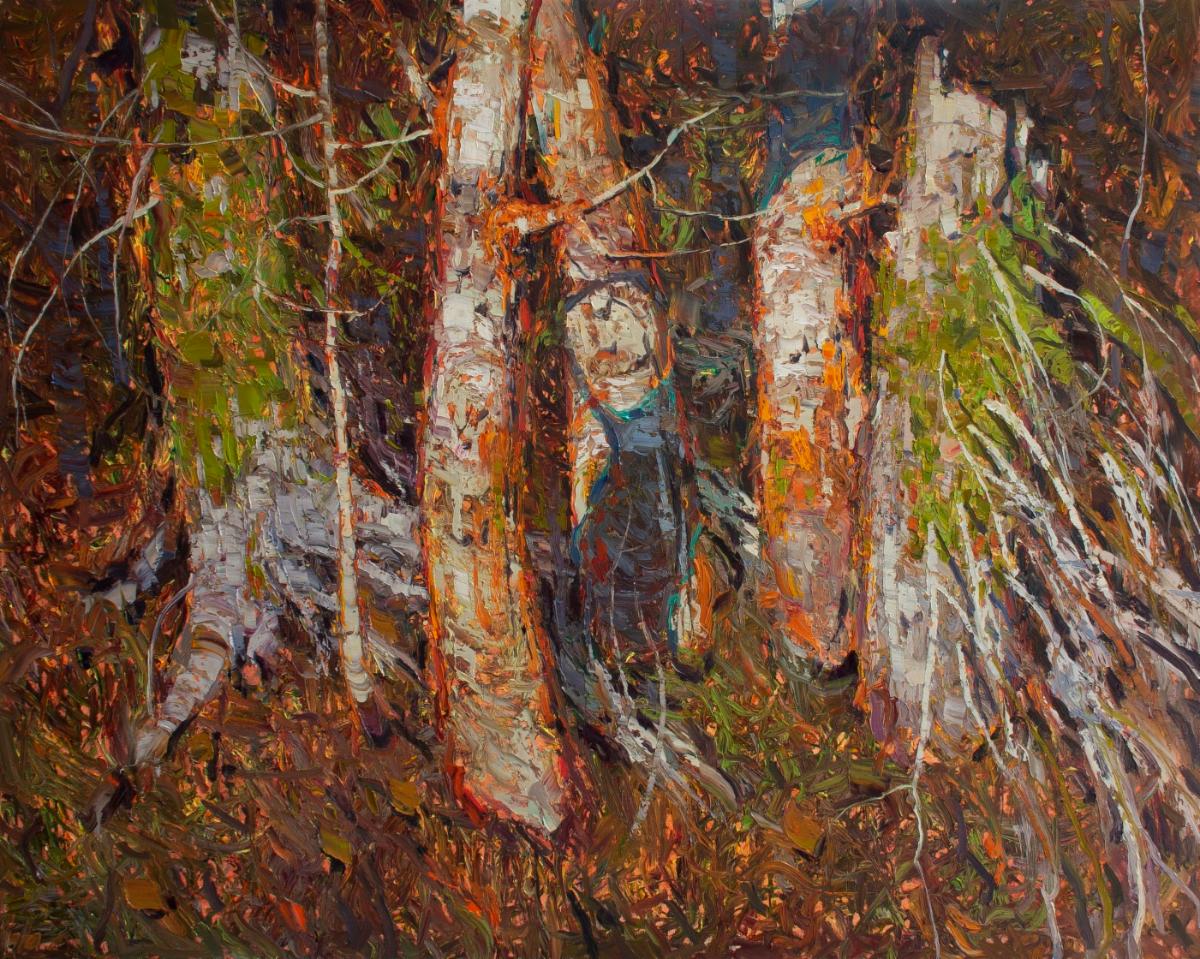 Many of Thompson’s trees, in these paintings, are quaking aspens. Perennially, in all seasons, Park City galleries display paintings of aspens. But somehow – why? – paintings of aspens in Park City galleries never weary your eyes. Because aspens seem to be a tree of hope: clustering as happily as horses in fields, also, as happily, on mountainsides. They’re lovers of cold places. They can be tender and frail-looking, but they’re strong in populations, numbers, looking like they’re following each other. And something about the litheness and springiness of their form even makes you think of tall human legs, perhaps a memory of how tall and reassuring your own parents’ legs looked beside you, when you were small.

Trees’ persevering defensive abilities may explain much of our reverence for trees in a natural setting. Guarding themselves, in a forest, they show us how we can quietly guard, too. (Recent studies in Germany show that trees are interweaving and surrounding each other, continually, to protect each other in a forest; among other odd facts, trees usually can discern, when they lose a branch, what caused the loss of that branch: if it was nibbled by deer, for example, the tree can increase a flavor of bitterness, to make nibbling less palatable.) 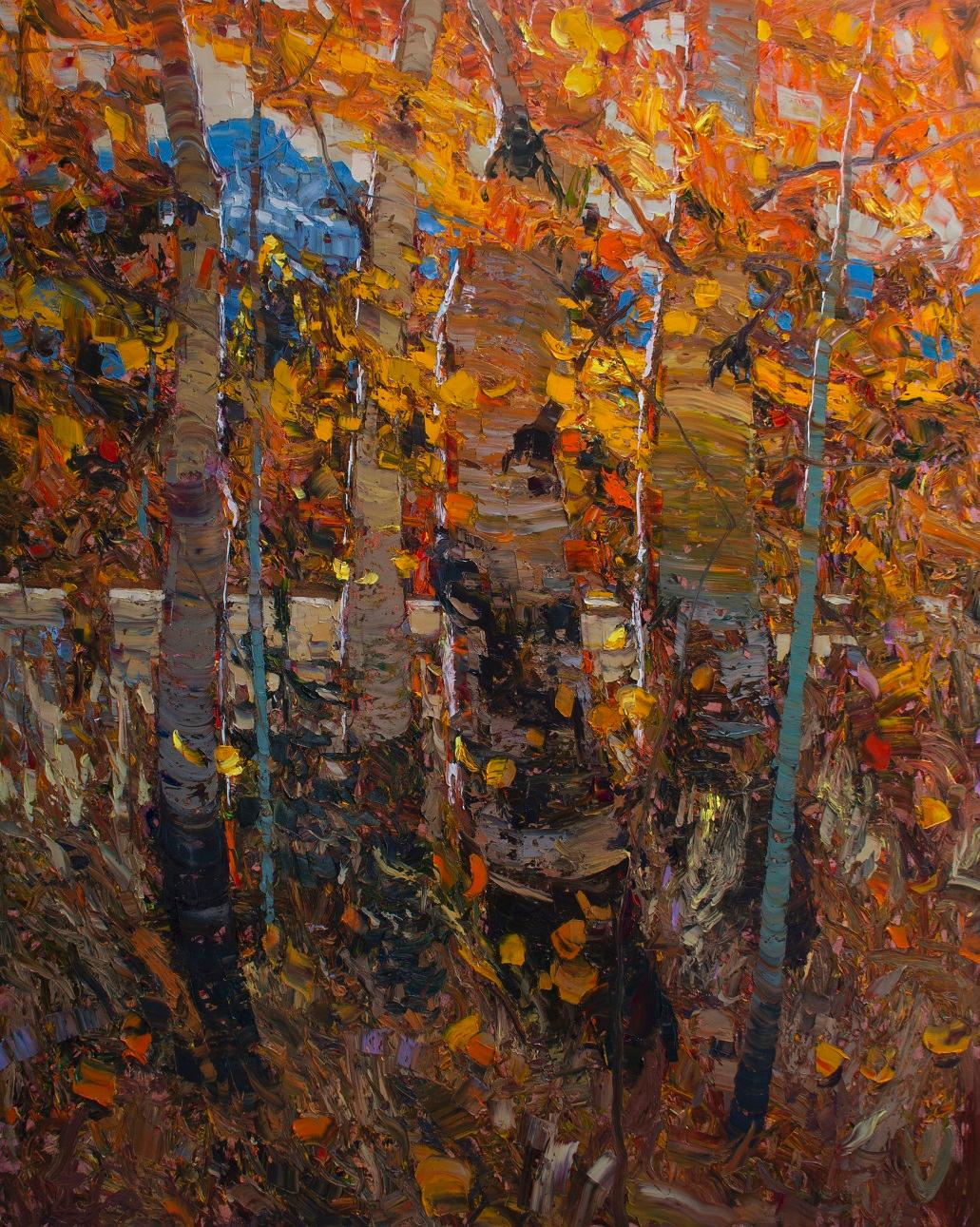 Of all of these, “Warmth in the Veins” is most apprising, its foliage shock-gold. What is it guarding, keeping? This painting, like many other paintings by Silas Thompson, is like meeting a magic figure in the wood, wearing raw suede boots and leggings and a heavy triple belt and double tunic, someone declaring to you he knows where the false king’s crown is buried: Eight steps toward the North Star,  twelve steps toward the river! And the old true king’s forest clearings? No, you know him not. Prove your brilliance; solve a riddle.