Shining light on an oft-overlooked medium: Beauty by Grace: Pastels at the Sears Art Museum Gallery 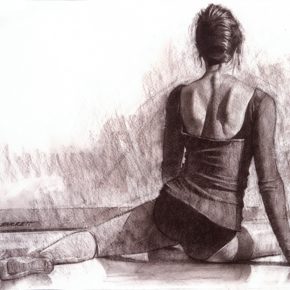 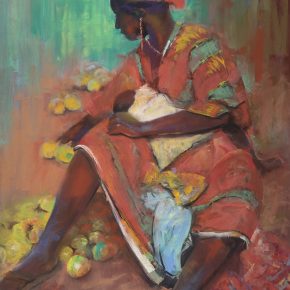 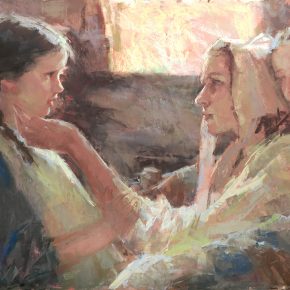 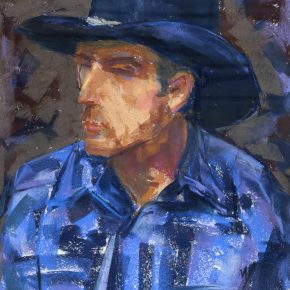 In the past, many artists and art critics dismissed pastel as messy, unstable, and useful only for sketching. But a revival of passionate painters with improved techniques has fostered a different perspective, establishing pastel’s reputation as a medium equally worthy of assessment, appreciation, and exhibition space. Curator Kathy Cieslewicz has brought together nine of these artists living in Utah for the Dixie State University Sears Art Museum Gallery’s new exhibit, Beauty by Grace: Pastels.

Cieslewicz says she has wanted to do a show focused on pastels since the gallery opened a decade ago. “We have such an amazing tradition of pastels in Utah. It’s hard to even realize the talent that’s in Utah in any medium, but especially in pastel,” she says. “I’ve seen pastels in museums all over, and I think that the quality of a lot of the pastels we have here is every bit as good.”

Consisting of pure powdered pigment and a binder in stick form, pastel is generally applied with the fingers and has been used since the Renaissance, but peaked in popularity during the 18th century, when notable artists such as Jean-Baptiste-Siméon Chardin, John Russell, and Jean-Étienne Liotard began using it as their primary medium. Pastels have garnered praise for the freshness of their colors; each tone requires a different stick, often resulting in artists using hundreds on a single work. Styles range from loose to very tight, and color from subtle to vibrant.

Arlene Braithwaite says she enjoys the layering ability of pastel and its ability to create beautiful hard and soft edges, such as those seen in her piece “Day’s End: Kolob.” Braithwaite is primarily a landscape painter, inspired by the majestic vistas of southern Utah, and after retiring from a 32-year career as an art educator for Southern Utah University, she has dedicated her time and energy to pastel painting. She says that its dry application makes it a great medium to travel with and paint on site.

Julie Rogers, a past winner of the Sears Dixie Invitational Art Show and Sale at DSU, is showing several pieces inspired by the pioneers and early settlers of Utah, portraits of children and people of various nationalities, and a landscape from her personal collection. She has been painting with pastel for about 30 years and says what attracts her to the medium is that it allows viewers to “see inside” the painting. “I am passionate about pastels. I think pastel is an overlooked medium,” Rogers says. “I think it’s a medium that has a certain type of beauty to it that you can’t get any other way.”

She also says it’s a medium that reveals individuality. “It shows personality. It allows you to see what pastels are all about,” says Rogers.

Mona Woolsey, for example, uses the dry sticks to create blocks of color that build up cubist structures in a work like “Cowboy.” By contrast, Jerry Hancock’s painting of an African mother in traditional dress is full of lusciously blended colors. Marilee Campbell and Colleen Howe use the sticks to build up rhythmic surfaces in their landscapes, showing off the medium’s capacities for impressionistic effect, while the works of Carol Harding and Amy Davis demonstrate that pastels can also create very detailed and realistic pieces.

Robert T. Barrett, a professor of illustration at BYU, is exhibiting a number of works that focus on the lines and figures of dancers. His monochromatic pieces reveal pastel’s traditional use as a drawing medium, while in other pieces, he uses the full palette of pastels to create works of light, shadow, color, and delicacy.

During the artist reception held on Dec. 5, the St. George Dance Company brought these works to life. “I’ve had them dance in the gallery before, where they’ve interpreted the art on display. It brings a dance audience, and they learn about the art. People who come for the art learn about dance,” Cieslewicz says.

Anyone visiting this exhibition will have plenty of opportunities to learn, especially about pastel as a medium. “A lot of people use pastel as a drawing tool, but there’s a giant leap when you look at art with pastels. They’re very much paintings,” says Cieslewicz. “They will learn to love pastels, because they’ll understand what they really are.”

Beauty by Grace: Pastels will remain on display through Jan. 21. Accenting the delicate subtleties of the show is the bold, graphic gourd art of Kolene Granger. Additionally, Trees of Life, a watercolor series by Lisa Huber, greets visitors in the Eccles Grand Foyer. The gallery is open Monday through Friday from 9 a.m. to 5 p.m. Admission is free. Visit dixieculturalarts.com/sears-museum to learn more.