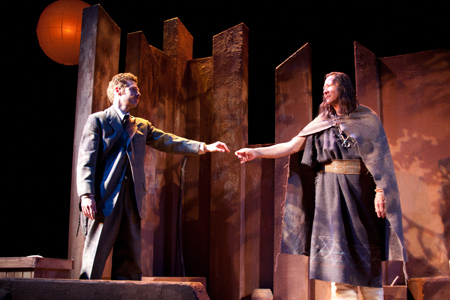 Given that She Was My Brother is written by acclaimed Salt Lake City playwright Julie Jensen, directed by the always insightful Jerry Rapier, and was selected to be Plan-B Theatre’s 20th-anniversery season opener, you enter the Rose Wagner with some anticipation. Then you see Randy Rasmussen’s almost two-story Zuni Pueblo and just hope the actors can somehow keep pace with the striking set. And the players surpass all expectation.

This is an evening of provocative, penetratingly well-acted theater. Alternately amusing and sobering, Jensen’s regional premiere is yet another winner in her string of successes.

The play is based on the historical Victorian ethnographers Frank Cushing and Matilda Coxe Stevenson – the first female anthropologist – and the Zuni We’Wha, a biological male who dressed and worked as a female within the tribe, spoke numerous languages, and was taken by Stevenson as an ambassador of the Zuni to Washington, D.C., passing as a woman while meeting the president, Congress and the Supreme Court. According to the play, We’Wha even used the ladies’ room in the White House.

Though Cushing wrote numerous books about the 1,700 residents of the Zuni Pueblo at that time, he never mentioned We’Wha, something that spurred Jensen to write the play. She says that if the first white people to study the Zuni Indians had told the truth about how transgender people were treated by this and most native tribes, everything might have been different for them today.

In Jensen’s play Lamana (We’Wha) grew up wanting to do women’s work – weaving, making pots and gardening. Rather than scorn or kill him as white Victorian society could have done, the Indians acknowledged his choice, calling him “two-spirited”, and suggested other ways he might be useful to the tribe: learning other languages and serving as an ambassador, for example. Lamana dressed and lived as a woman and was the person who represented the Zuni to the two white ethnographers who showed up to study them. 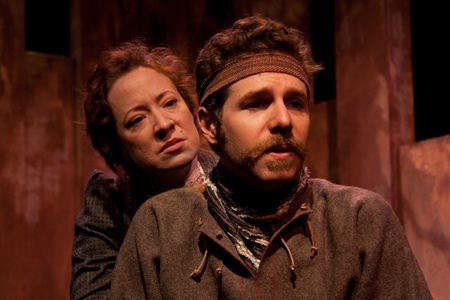 The difficult role is played perfectly by Joe Debevc. Though his words are few and often guttural, s/he stands tall and proud and the subtle sexual tension s/he creates among the players is tangible. Jensen seems to examine the impact of the ethnologists’ intrusion on the tribe through what they do to Lamana with his/her unrelenting impact on their senses of sexuality and self-importance.

Though polite society today would always say “she,” his/her is an important distinction in the play. Tullis, widow of the expedition leader, played brilliantly by April Fossen, is in love with the female side of Lamana, the side she shows off in Washington, and always refers to her in the feminine form. The very young and fearful Wilson, played with finesse and believability by Jay Perry, falls in love with Lamana’s male side (with a little help from Walt Whitman’s poetry), to the point of going native when Tullis abandons him early in the play. He always refers to Lamana in the his/him format. 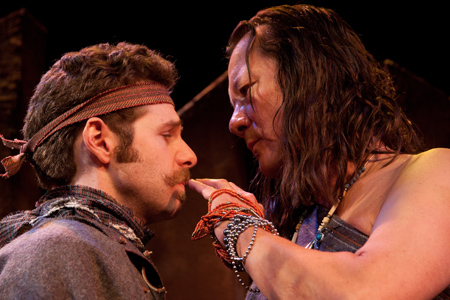