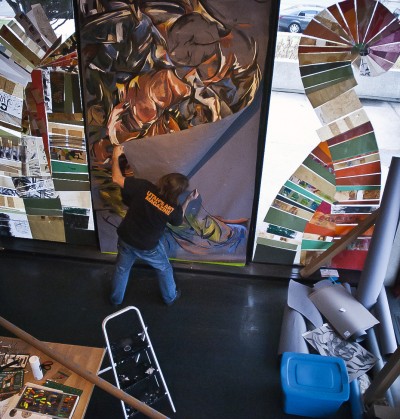 German painter Gerard Richter has dominated world painting for half a century, from his beginnings in Pop to riveting-if-fuzzy images drawn from daily newspaper photos, then large abstracts shaped primarily with squeegees, and on to more radical experiments. Though we may not know its actual source, we all have at least one Richter painting lodged in memory. So there was more than a little excitement recently when he agreed to allow a documentary filmmaker to record the daily goings-on in his studio, including not just his interactions with his staff of assistants, far-flung galleries, and the press, but the actual process by which he creates his works of art. The film that resulted is fascinating, but its climax is dampened by Richter’s discovery, after struggling with one large panel in particular, that he can’t actually work in the presence of a neutral witness like a camera. Sometimes all it takes is courage to dispel a myth; at other times, no amount of bold determination can conceal that the myth is true. Unlike, say, actors and musicians, painters give up companionship while working in hopes of trading for fame. It’s still a lonely trade.

Thoughts like these kept pushing to the front of my mind as I stood in the lab of the wonderful Leonardo, watching 15 Bytes’ founder and editor Shawn Rossiter work on the latest generation of his continuing exploration of architecturally-scaled drawings. (I was also speculating on what kind of arm-twisting it would take to get him to put my thoughts up here, in the magazine of record for Utah arts.) Rossiter is gregarious and accessible in person and clearly enjoys the challenge of making art in front of an audience, which he’s done twice since the Leonardo opened last year, and before that at the Art Barn. It must be his personal modesty that prevents him from pointing out that, while bestride a 12-foot step ladder in the soaring space of this refurbished building — a gift to the citizens of Utah in a time when budgetary constraints hobble most hopes of developing extravagant new public spaces — he is also on the forefront of contemporary art, in a relatively uncommon genre of performance called an ‘action.’ In an action, an artist brings some mundane activity into the gallery for contemplation by an audience. San Francisco’s Tom Marioni was perhaps the first to close the circle with “Studio,” an action in which he, like Rossiter last week, brought his materials to the gallery and let everyone witness the actual creation of his art. 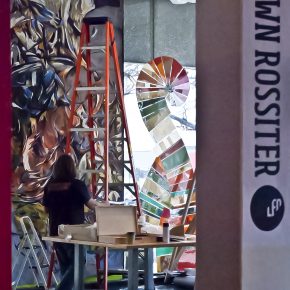 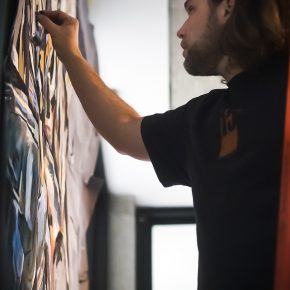 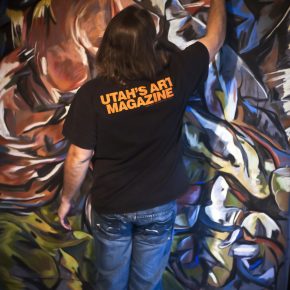 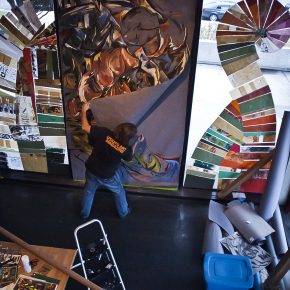 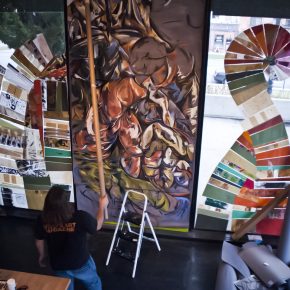 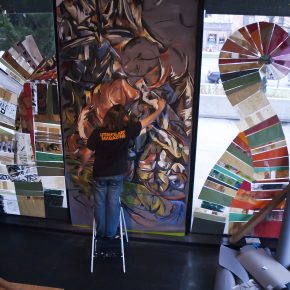 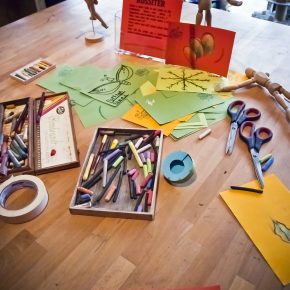 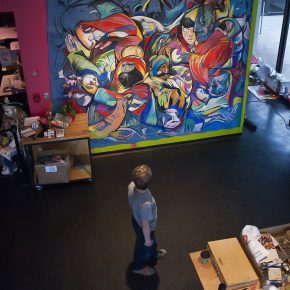 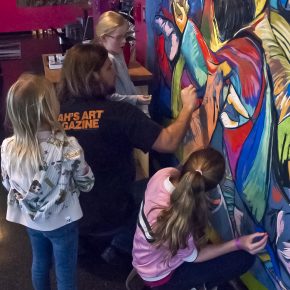 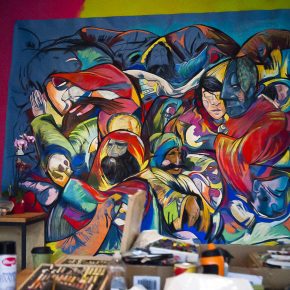 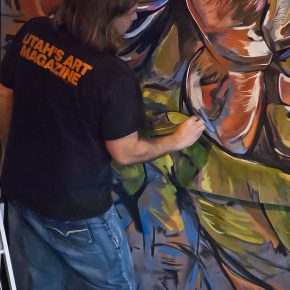 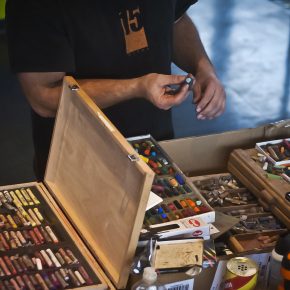 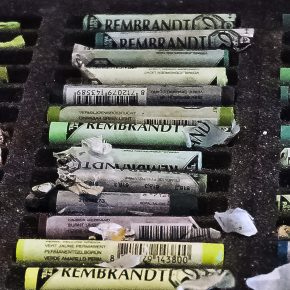 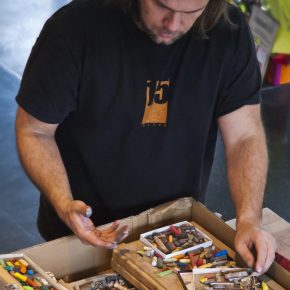 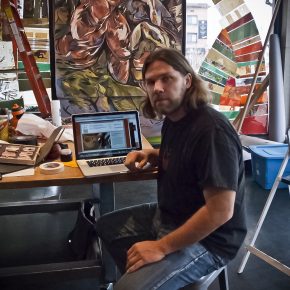 Of course, for every audience member intrigued by this new art form there will be several more interested in the art-within-the-art: by Shawn Rossiter’s gigantic drawings. Rossiter has always worked across the boundary between representation and abstraction, creating a shallow-but-convincing illusion of depth on the order of a bas-relief, while suggesting massive animal and human figures engaged in titanic, epoch-making struggles, seemingly as much with the forces of gravity and spatial collapse as with each other. Here they invoke another boundary: that between heroic, living deeds and their monuments.

At the Leo, Rossiter refers to other nearby works as well as the cubical space and alternation of narrow walls and windows that characterize the modern building. Not content with referencing and reinterpreting the space around him, Rossiter plans his drawings as reinterpretations of themselves. He covers a fraction of his very large paper support with a smaller piece of paper, this to be removed after the drawing feels complete, and the blank space left filled in with a different drawing extending the same surrounding elements. This recalls the Surrealist mechanism known as an Exquisite Corpse, in which folded paper is drawn on by several artists who do not see each other’s work, the final drawing being revealed only when the paper is unfolded. Something else that feels related are those children’s books with pages subdivided, so the separate, illustrated parts can be turned individually. Putting Spiderman’s head on the Green Lantern is more subversive than may at first appear. In effect, what Rossiter creates could be seen as an artistic relation to his job as writer and editor: a drawing that allows him to repent his first effort and produce a second draft. It’s a fascinating idea, one that may deliver something artists have dreamed of for centuries, while at the same time realizing a more modern dream — extending an artwork into hyperspace, four dimensions, or the viewer’s memory and imagination.

Shawn Rossiter was the artist in residence at The Lab @ The Leoduring the month of March. His large-scale drawing remains in situ through April 11. Another large-scale drawing, created during the residency in collaboration with David Habben, now hangs in the museum’s Education Center on the third floor. The Leonardo is located at 209 E. 500 S. They are open Mon-Wed from 10am to 5pm, Thurs-Sat from 10am to 10pm and Sunday 10am to 7pm. Cost of admission varies.

Tagged as: Shawn Rossiter, The Leonardo