Shawn Harris: The Best We’ve Got 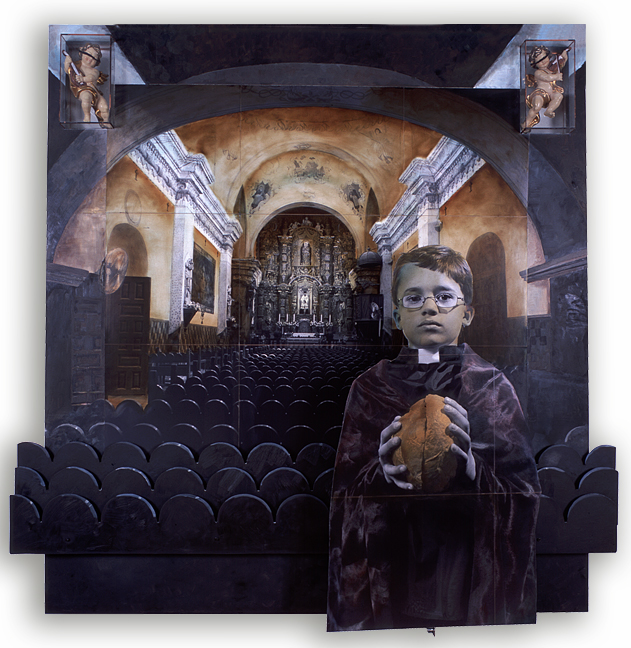 OK, here I go. I’m gonna lay it on the line. All my future critical responses will be judged by this one utterance, this one assessment, this giving of a 10 by which the 9s and 6s and 7s of future critical reviews will be metered. I stand on the precipice . . .

I think Shawn Harris is the best artist we’ve got.

Choose, if you will, to ignore my slight bravado. After all, I may not be too far out on a limb. I’m not the first to recognize this artist’s talent. Harris has appeared in a number of exhibitions the past couple of years and the Salt Lake Arts Council is currently giving him a show – the impetus for my assessment – which hangs until April 9th. At Artists of Utah’s 2002 35 x 35 (where I first saw his work) he garnered both a Juror’s Award, as well as the People’s Choice Award. He has also won a Traveling Exhibition Award from the Utah Arts Council. But I don’t think that any of this adequately sums up the strength and excitement of his work.

So, I’ll say it once again, Shawn Harris is the best artist we’ve got.

By we, I mean Utah, and more specifically the Salt Lake scene – which is mostly what I get to see. This, admittedly, isn’t exactly saying that Harris is ready to conquer an international bienniale. But then again . . .

Harris describes himself as a photographer, but as his 11 pieces at the Art Barn aptly demonstrate he is so much more. The central method of his work is photography, usually very large images, produced in multiple 16 x 20 sections to create a full image. The photography is blended with oil paints, hand tinted, often projected both in 2 and 3 dimensions. Most importantly, the photographs don’t feel like photographs – which far too often leave a lot of viewers, including me, uninterested. 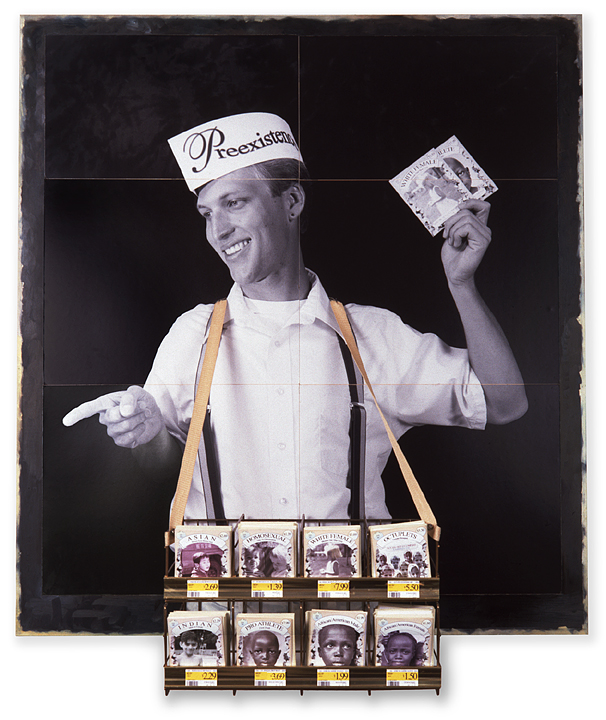 Harris’ work has everything. It is sculpture, painting, photography, found object amalgamation, and I wouldn’t be surprised, due to the nature of the pieces – their built-in architecture and projecting panels and pieces — if it became installation art as well.

Harris goes much beyond photography, but not by relying on Photoshop’s tricks and other digital wizardry to spice up his photographs. That’s because his works really aren’t photographs. They use photographs but are something different entirely. Harris relies on a form of collage, with photography as one element, to create the interest of his pieces. He also uses found objects, carpentry, glass pieces and other three-dimensional aspects. All to create what I call his “settings.” His works seem like still theater, creating a space, a drama and a statement. And like theater he is able to use his artwork as social commentary.

By far one of the strongest pieces in the exhibit at the Finch Lane Gallery is actually one of the simplest. In “Seed Seller” we see a large photograph of a young vendor (a popcorn seller at a ball game maybe?) with the words “Preexistence” as the logo on his cap. From the frame of the photograph extends a rack with packs of seeds displayed. You can choose your gender, your race, even your occupation. The highest priced seed is a white female, which sells for $7.99. An Asian goes for $2.69 and a homosexual for $1.39. An African-American female sells for $1.50 (you’ll have to pay an additional $6.49 to get that white skin). Her male counterpart costs an additional $.49. But a professional athlete (shown again as an African-American male) sells for a whopping $5.99.

The piece is an explosive commentary. The seed rack has the feel of an old general store, and the vendor hints at that bizarre populist arena of acceptance – the national sports industry – where everyday racists will forget the color of your skin as long as you can jump high or hit the ball over the fence. It also reaches out in a global context, a sci-fi comment on the future of genetic engineering. More poignant, it seems a local commentary, the “Preexistence” of the cap logo a purposeful code word for the Mormon concept of pre-earthly existence and the extra-doctrinal interpretations in Mormon culture of people’s “placement” on earth (in bodies) dependant on their valiance in the pre-life. 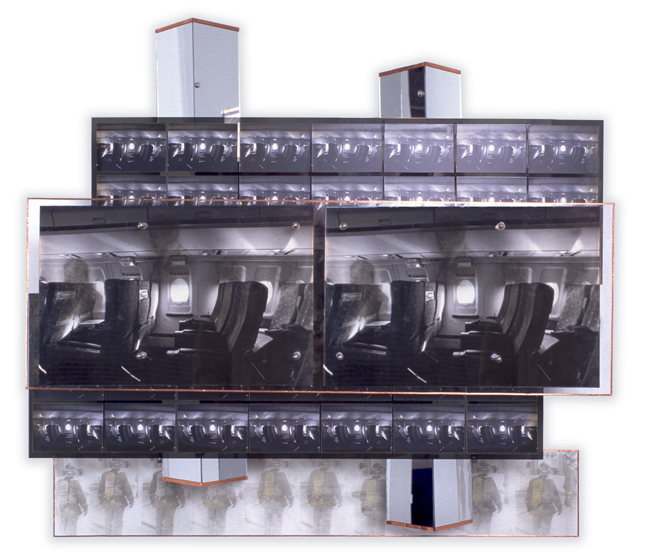 Harris is an equal-opportunity offender, not only relying on the local, and admittedly easy, target of the Mormon culture. The national scandals of the Catholic Church have no problem stepping into his work. In “Sell Me a Papal Indulgence for My Bread of Heaven” the recent scandals in the Catholic Church may be the medium, but the message is a reminder about the evil and corruption that tends to invade organized religion. Harris creates a stage set – literally. Theater seating is placed in a Baroque church setting, and extends from the two-dimensional space of the photograph into the three-dimensional world of the viewer. A young boy, vulnerable behind his spectacles, holds out an unbroken loaf of bread in an uncomfortable gesture somewhere between offering and appeal.

Take a look through the entirety of the show and you realize Harris is not a one-tune wonder. Political commentary is not the only thing he can do. He can also make elegiac works, as in “Operation 911.“ Think of some of the recent “tributes” to 9/11, which more than two years later still dominates our societal psyche. There are the FBI agents, recently exposed in the media, who took “souvenirs” from Ground Zero and later gave them to friends, family and business associates. Or the furor over the political prostitution of 9/11 images in the ongoing presidential campaign. Give it a few years and we’ll see images of firefighters at Ground Zero used to sell trucks and the latest country single.

Then there is Harris’ piece: a long horizontal collage of images, both photograph and a super-imposed glass etching, of the interior of an airplane where ghostly figures can barely be seen walking or sitting. Beneath it all, subtle images of firefighters.  For his tribute to 9/11, Harris has chosen not the fascinatingly lurid image of the passenger planes crashing into Manhattan’s towers, or the senseless rubble of the aftermath. His is a tribute to what 9/11 really showed. We are all vulnerable, and no matter how many wars we wage here or overseas we will remain vulnerable; but Harris reminds us of the heroism latent in the best of our souls. Yes, 9/11 is a bullet ricocheting in the soft spots of our conscious minds, but in Harris’s work it rends through the very best of us and reveals us to ourselves like an open wound. These images we are seeing are the heroes of 9/11: the “Let’s Do It” passengers of the fourth airplane, who prevented a greater tragedy in D.C.; and the firefighters who raced into the towers to save the lives of others only to die in the crumbling mass or live to clean up the remains of their fallen comrades. The tone of the piece is quietly honoring: no bravado, no brass bands. It is a visual moment of silence for the departed heroes.

The singularly non-photographic work in the exhibit, “Single Downer,” is a powerful work in its simplicity. The rib cage of a single cow is encased in glass. It feels like a museum piece from some Museum of Natural (or Unnatural) History.  What exactly would the placard read? “Single Downer leads to the spread of mad cow disease to entire North American cattle population, fast-food industry completely destroyed, world markets collapse, devastation by World War III.” Who knows? What the image represents is not some localized danger, but a reminder of exactly how closely we are all connected. Like Patient Zero, the promiscuous French-Canadian flight attendant to whom a fourth of the initial AIDS cases in North America have been connected. Despite our best attempt to find a hole in the sand big enough to hide our heads in, we can’t but face the hard reality that forevermore our world is connected and we are all one.

Shawn Harris is our best because he knows how to get at our best and at our worst. He probes our fears, our prejudices, our wonder and our hurt. 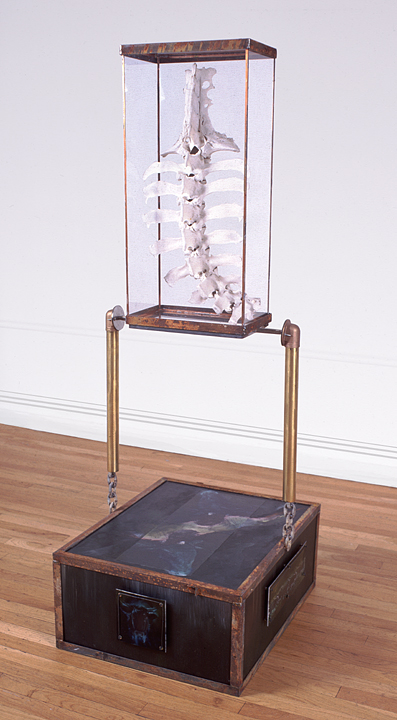 Is my assessment of this young artist overblown? I don’t think so. Take a look around this month and then go to the Art Barn and see for yourself. In fact, in the Art Barn itself you’ll see an apt comparison. Hanging concurrently with Harris are works by John O’Connell, new professor of art at the University of Utah. O’Connell’s works are layered, encrusted mashes of abstract markings. They are certainly beautiful. But in the end they don’t really take your breath away. They are not the ax that breaks open the frozen lake of your mind, to co-opt a phrase from Kafka. They are accomplished and attractive but they are not astounding. I would even say that O’Connell is one of the better artists around here. But he’s stuck in a self-absorbed meandering through material, whereas Harris has really tapped into a post-modern sensibility and method that seems to capture our times in an appropriate medium — which seems to be the best that art can offer.

Sure, I may be wrong. I may be premature. I may be excited for the moment. But take a look for yourselves. He’s got breadth and he’s got depth. He’s got a voice and he’s got something to say. He’s my Bo Derek. He’s my 10.