Shawn Harris: Still the One 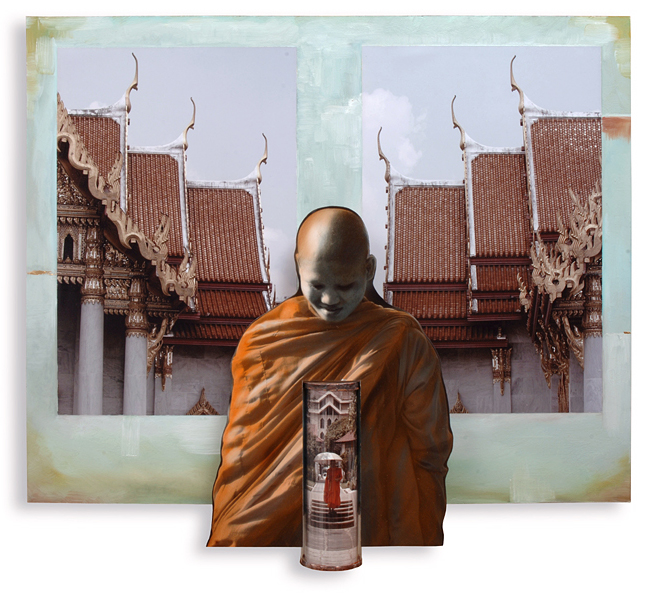 “Compression of Time Outside the Marble Temple” by Shawn Harris

In March of 2004, unsolicited and unilaterally, I climbed upon my digital soapbox and declared Shawn Harris “the best we’ve got.” In his amalgamation of photography, painting, and found and constructed objects I saw a vital artistic medium that could address a variety of subjects with wit, beauty and insight. Despite such effulgent praise, Harris essentially disappeared from the scene. Now, over two years later, he reemerges with an exhibit of new works at the Rose Wagner Arts Center (through the month of December).

Harris’s return impresses upon me the imperative to evaluate my grandiose assessment and decide, with his new exhibit, if his talent is indeed prodigious or rather prodigal. Was my soapbox well-constructed, does it still stand firm? Or has it weathered and weakened? Two years later can I still say the same thing or should I maybe get down before I hurt myself? With Harris’s works at the Rose Wagner, a series of pieces inspired by a recent trip to Southeast Asia, I’m not entirely certain. 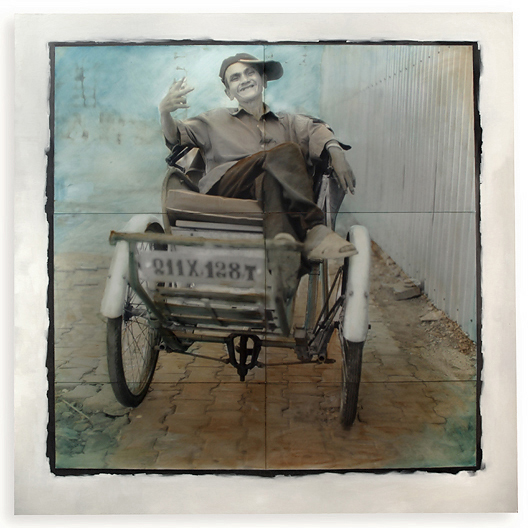 My uncertainty comes not from the method. I still love Harris’s way of constructing art. His “sculptography,” what in 2004 I called “settings,” continue to vitalize his photographic work, creating pieces that unsettle the traditionally safe gaze of the 2-d print that we use to capture (a violent word) our world. What makes me uneasy in my assessment is not the method but the mode. We all like to travel and who can’t blame an artist for putting on a show of work from a trip abroad, making it possible to write off the whole thing to the tax man. But tourist art is rarely good art.

Some of Harris’s images give us the tourist’s gaze — they show the local flavors, the colors and textures, the charm, the difference of a foreign locale. But there is a disappointing sameness in some differences. Artistically, the rickshaw driver of his “Cyclo Saigon” is not considerably different than the striped-shirted gondolier in the canals of Venice or the ten-gallon hatted carriage driver circling Temple Square. 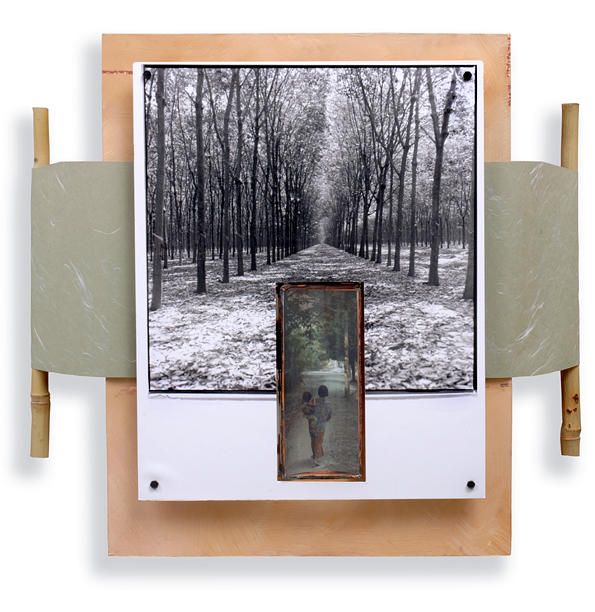 “Reverberations of Secrets” by Shawn Harris

But I’m not quite willing to abandon my soapbox yet, because, despite the unfortunate tourist aura of some of these works, I can still see the incisive mind of Harris that I enjoyed two years ago creeping into his pieces. Like a bloondhound able to focus on a single scent in a forest of olfactory confusion, Harris’s eye for the ambiguous, unsettling image surfaces in many of the current works.

Southeast Asia is becoming a tourist hotspot, especially for young people, attracted by a destination where the dollar is still powerful, the beaches are plentiful and one doesn’t have to worry about donning long pants just to see the interior of a stuffy cathedral. But for anyone over forty, anyone that can actually remember the military conflicts in Southeast Asia (if only, in my case, from the television screen) excursions to places like Saigon and Hanoi come with more cultural baggage than will easily fit in the overhead compartment.

Though Harris was barely born before the conflict ended, his pieces seem to allude to the unease of historical baggage. The title “Captured on the streets of Hanoi — An isolated reminisce” has an ominous feel to it even when the actual image is only a blurred view of a street scene. “What is Past is Past” is the most direct allusion to the recent past. The large image shows a partially dismantled tank sitting idle in the jungle. A sideways jar, protruding (as in other pieces) from the larger image seems to encapsulate the past, sealing up our sorrows and fears. But the tank is far more imposing than the jar and while the title seems to brush aside the past the image is not so reassuring. 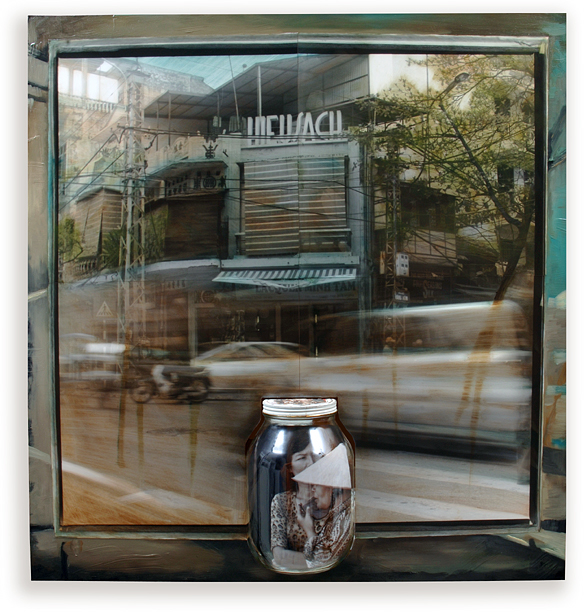 Harris’ technique of collaging different photographs from different times, angles, and places and in different formats is effective in creating ambiguous situations that in their indeterminacy cause a certain sense of pleasurable unease. In “Reverberations of Secrets” the color image of a woman carrying a child down a tree-lined lane is superimposed on a larger black and white image of a similar lane devoid of human presence. These in turn are superimposed on what gives the feeling of being a scroll tied to two bamboo sticks. Past and present become confused. Is the woman walking towards a future or into the past? In “Journal at Angkor” a boy and a girl are collaged with elements of the famous ruined temple. The center of each child’s chest is embedded with another photograph — a trio of young monks amongst the ruins, in the boy’s case, and a young woman pumping water from a well in the case of the girl. It is difficult to decipher whether the artist is indicating the children’s predecessors or their future incarnations, but it is this ambiguity that gives the works appeal. 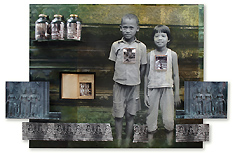 “Journal at Angkor” by Shawn Harris

So, in the end, where do I stand? Cautiously atop my soapbox. As I wrote in 2004, Harris has “got breadth and he’s got depth. He’s got a voice and he’s got something to say.” I enjoyed more what he had to say in 2004 (how many of us, after all, like looking at others’ travel photos?) but I think this exhibit shows that the artistic voice he has created with his sculptography is potent even in latent situations. A weak artist on tour will quickly drown in tourist clichés and Harris succumbs to his fair share, but his technique of collage and use of multiple viewpoints and multiple materials allows him to always call into question the clichés in the same moment he is uttering them.