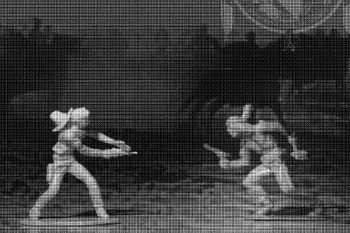 Shattering The Pictures In Our Heads deconstructs the mythic Indian stereotype through an immersive documentary experience with genuine perspectives from members of the Shoshone-Paiute Tribes of the Duck Valley Indian Reservation. This film installation creates a three-dimensional audio and video environment where visitors can find themselves steeped in the sights, sounds, and powerful stories that bring to light the diverse cultural identity of the Native community.

The artists behind this project are students and teachers from the Deep West Filmmaking Mentorship Program by Edge of Discovery since 2014. In six years, the mentorship has produced over 40 short films with students from the Owyhee Combined School to capture the language, history, and culture of the Sho-Pai Tribes. All the films premiered annually at the National Cowboy Poetry Gathering and continue to reach a broad audience and gain recognition.

Shattering the Pictures In Our Heads demonstrates a bold new direction of artistry and expression by the Deep West Filmmaking Mentorship Program led by Karem Orrego. It became a natural collaboration between producer Colene Paradise and mentorship students Destiny Max and Lance Owyhee to work on the story, voice, and visuals of this documentary experience with filmmakers Carol Dalrymple and Karem Orrego.

Edge of Discovery is a 501(c)(3) media arts non-profit whose mission is to discover and amplify voices which have been historically silenced, simplified and minimized, and pairs communities with filmmakers in mentorships and original projects.