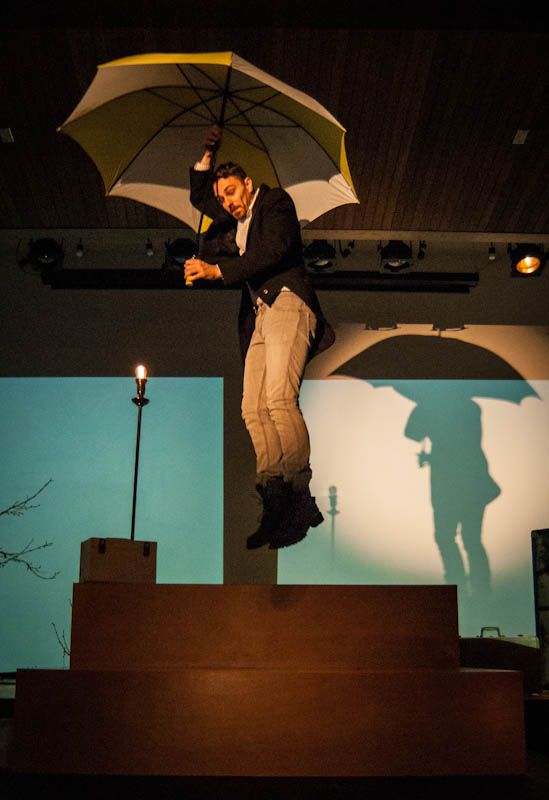 For a performance at the Leonardo, why not draw inspiration from the man himself? Co-creators Robert Smith, Creative Director at the Leonardo, and Alexandra Harbold, Freelance Director, did just that for their latest work, “Senses 5.” “We wanted to create a project that met the Leo’s mission of fusing art and science,” Harbold says. “Leonardo Da Vinci’s journals provided the perfect, inevitable spark,” The two were inspired by da Vinci’s observation that the average human being, “looks without seeing, listens without hearing, touches without feeling, eats without tasting, moves without physical awareness, inhales without awareness of odor or fragrance, and talks without thinking.”

Similar techniques are used throughout the performance, immersing the audience in the sensory experience being woven on stage. The character’s dog, Maggie, which is suggested visually by the character’s hat, accompanies Smith as the sound of her panting indicates that she’s nearby. Smith’s lost, 4-year-old self is able to make his way home when he remembers to look for power lines to guide him back to civilization. The audience hears electricity pulsing through cables while telephone poles are projected across the walls. Creating these powerful effects are the video projection design by Conor Provenzano, sound design by Adam Day, and original music by Skellum.“Senses 5” takes the audience on an intriguing journey, bringing to life the power of sensory input. The production uses visual and sound elements that have an onstage presence equal to that of the Smith’s solo character. Knocking down the theatre’s fourth wall as he takes the stage, Smith commands the viewers’ attention with the gusto and charisma of a ringmaster at a circus. Addressing the audience directly, even at times encouraging their participation, he climbs a small ladder and peers around the room as though surveying vast surroundings while recounting a childhood story of being cold and lost in the wilderness. Desolate, icy images of the outdoors appear projected in grainy black and white on the walls behind him, and the sound a chilling wind passes overhead.

When a Madonna song starts to play, Smith is transported to the time in his life when his parents divorced. The 80’s hit “Borderlne” blasts from a nearby stereo, and the iconic singer’s voice likely conjures different memories for everyone watching –perhaps an unforgettable night on the dance floor. Scott uses the song to segue in to the importance of dance, its communal purpose, stretching back to the time people probably danced around the first fires. Sound and the other senses are ultimately the thread that unites people as well as define and shape their surrounding world. 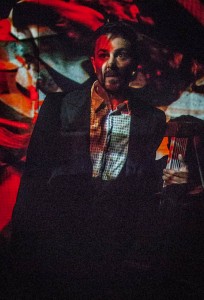 “This is the beginning of a larger project and creative venture,” Harbold says. “Inviting an audience to come play with us and experience something that’s still unfolding feels simultaneously insane and thrilling,” she says of the premiere performance on December 7th. “I keep hoping Leonardo would approve.”