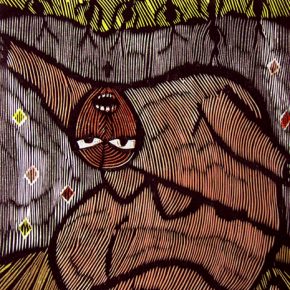 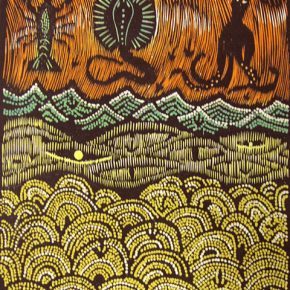 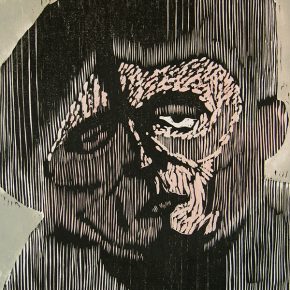 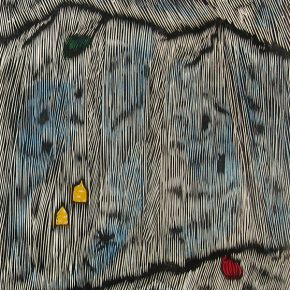 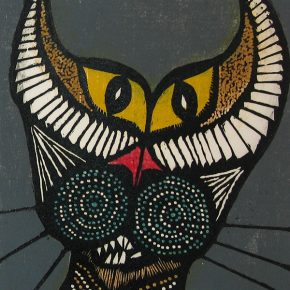 The works of the late Harry Taylor, now on exhibit at Phillips Gallery, teem with energetic life and vitality. With his unique sense of brevity, playful sense of humor and dynamic skills as a woodcarver (he managed to keep working even after he was diagnosed with ALS), Taylor created fantastical creatures and playful narratives that in his lifetime ambitiously added to his field.

Taylor’s was a unique ability to adapt obscure realities with visionary states of mood and atmosphere within the confined limitations of the woodcut print. A graduate of the Art Institute of Chicago and art director for Meridian Publishing Co. for 30 years, Taylor had a style driven by a strong sense of design, and a quiver of subjects influenced by the aboriginal art he came across in the South Pacific during World War II. Whether exploring iconic figures or the symbolic qualities of the landscape, Taylor was able to transport the viewer by mood, wonderment and humor.

The influence of aboriginal art can be seen in Taylor’s thick use of dark line, and in his patterned surfaces that often have the appearance of stitching or beadwork. Like totems, his figures stand front and center, mesmerizing the viewer. In “Cat Mask” the image of the cat, much like traditional icons, rouses the sensibilities of the viewer. The artist uses pattern, abstracted symmetry, linear form and basic structure, and color, to compel the viewer to a connectivity with this amusing feline: the viewer is drawn into a state of bewilderment by this exotic animal with its elongated and white, horn-like ears; its teal, disk-like cheeks, from which whiskers protrude like daggers; its small mouth filled with razor teeth; and its comical eyes, pools of lemon yellow pierced by black almond ovals that express something between hilarity and quizzicality. The viewer feels in on the joke, drawn to this jocose creature, pulled into the hypnotic patterns and overall playfulness of the creature.

Taylor’s landscapes have an equally symbolic quality, appearing in the vertical rather than the traditional horizontal format, and eschewing Western perspective and verisimilitude. A work like “Dead Sea” full of color and form, is anything but dead, yet it is not quite alive. It is not quite easy to interpret but entirely beautiful, with a powerful color presence, held together by shimmering shades of gold. There are four planes of sea here, rendered in a holistic flatness, one plane on top of the other. The frontal plane is a range of golden-beaded chevrons, that holds up a band of abstractly interpreted waves, in shards of gold; above this is the most realistic rendering of waves, in small beads of sea-foam green with peaks and troughs. The final great space rises up in a linear and lucid orange like a great wave at its crest and contains a lobster, a mysterious ray, and an octopus.

As colorful and dynamic and heavily decorated as a work like “Dead Sea” can be, Taylor could also make landscapes with a minimalist power, where the viewer must come to a synergy with the artist and find the great heights with him. The two peaks of “My Hill,” are, physically, rather dull, painted with cuts to allow for the dismal gray of the mountain and the same dismal gray of the sky to blend together. But the viewer must allow Taylor to be the entertainer, to not always be obvious, and in this reticent landscape they must find the magic in the miniscule houses placed alongside and giving life to the flat mountainscape: two charming yellow structures toward the center, one red one below, and a green high up in one of the peaks. And as if all of this might be seen through a mesh screen or window, a bug-like creature climbs across the top right corner of the image.

Insects appear in two other works: in “I Hate Ants,” in which a stylized figure bends away from the ants descending from the top of the frame; and more happily in “Butterfly Lady,” in which a similarly sinuous, though much less sinister form, delights in the surrounding blue and yellow and red butterflies. The animal kingdom makes appearances in almost all of these works, forming comical and entrancing connections for the viewer: a companion to “Cat Mask” features an equally engaging rhino figure; in “Family Tree” human figures are joined by mammals and birds; and the latter appear by themselves in “3 Birds.” The figure in “Flasher #2” is quite ambiguous, but the bird-like head and bat-like wings suggest some type of fauna.

By contrast, “Peter” is a sole human figure, showing the artist’s versatility in subject and tone. Here we have entered the realms of pure existential being with a bulbous-headed ‘Peter’ taking up almost the entire frame, his sagging and disproportionately large head leaving little negative space. It is an image reminiscent of the early 20th century, of Kafka, Klee, and of the German Expressionists. Peter is all expression, neither happy nor sad but a representation of a state of being in the manner of Kafka and Klee without much left to meaning and a purely existential creature to reconcile his own pathetic state of being.

There are many more degrees and levels of fantasy and color, imagination and whimsy to discover in these woodcut adventures, making a visit to the Dibble Gallery in Phillips’ basement well worth the trip. It is an opportunity to discover journeys of bewilderment and wonder and tongue-in-cheek humor, by a wonderful artist who posthumously leaves so much waiting to be explored.

The woodblock prints of Harry Taylor are on exhibit at Phillips Gallery in Salt Lake City through November 14.