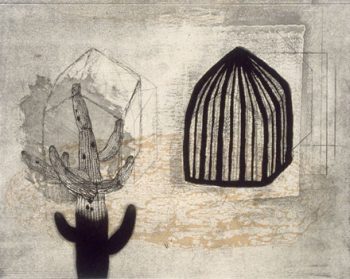 The thing that captures the eye is a series of heavy black lines rising from a square base and curving, converging to a point. This cage stands to the right on a yellow-brown field extending beyond it, visible through its bars. On the left rises a meticulously observed Saguaro cactus, an apartment house for birds contrasting the freedom of those that dwell in its interior and the captivity of the cage. A shadow of the horizon falling across the bottom of the Saguaro creates a strong sense of daylight. But is the sun rising or setting? Tentative lines scratched around the cactus delineate the shape of a house, while another line inside the cage shows the same gabled form. The implied equation of home and cage is complex, a metaphor for the necessary compromises that hold us back or, if skillfully made, advance our interests. 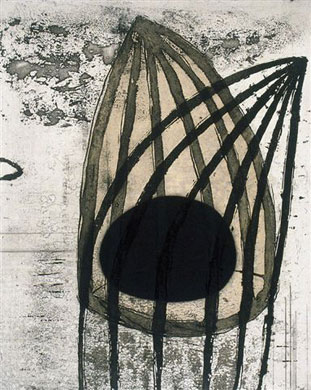 Skillful making is what Akiko Taniguchi and Sean Caulfield excel at, and their expertise in two arcane printmakers techniques — chine-collé and mezzotint -— brought them to SaltGrass Printmakers for a residency, workshop, and an exhibit that will continue through July 31. Though the resonance between their independent works is strong, as befits a couple who live and work together, differences are worth noting. As evidenced by three different versions of “Cage,” Taniguchi, who moved from Tokyo to join Caulfield in Canada, is interested in our complementary struggles to both approach and avoid nature. In her images, an almost viscous atmosphere creates a feeling of three-dimensional space she does not render in perspective, but which is nevertheless specifically felt. Textures in that space set off and divide the visible into nearly subliminal zones, as if the categories in our minds could be made visible. 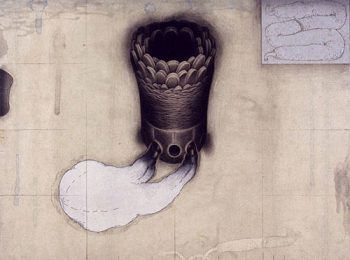 Taniguchi’s use of the chine-collé technique is more immediately apparent than Caulfied’s: the organic textures and shadows that give her vignettes their pervasive moods can be achieved with layers of separately printed tissue laminated on a solid base. Caulfield, on the other hand, meticulously models solid feeling but ambiguous objects, which are always like machines, or things they make, yet also marked by the characteristics of living things. He places these on flat surfaces that often bear traces identifying them as diagrams or scientific documents. The rigor with which he models these inventions, until they feel solid and with a sense of identity, creates an irreducible conflict between their massive presence and the shallow space they inhabit and disrupt. This tension, combined with uncertainty about their absolute natures, makes these apparitions fluctuating, unsettling enigmas. Not simply beautiful in their elegant forms and ornamental surfaces, they challenge us not to fear their alien character and unknown purpose. They recall Edmund Burke’s notion of the sublime: a positive ugliness with a capacity to frighten, producing “the strongest emotion which the mind is capable of feeling.” In short, more intense feelings than beauty can produce and that, when overcome by confronting the source, produce a delight greater than any conventional pleasure. 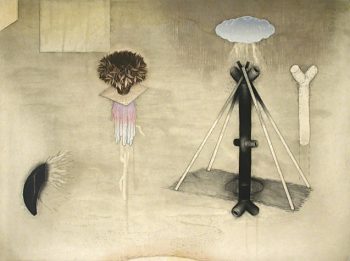 Burke’s contemporaries, the Romantic poets, connected the sublime to vast emptiness experienced in the Alps or while contemplating the ocean. Caulfield compounds curiosity and the waking confrontation with nightmarish uncertainty and dread by meticulous use of mezzotint, a painstaking technique for producing intense black and infinite gradations of gray. Mezzotint allows images to emerge from inky darkness, or like black holes, to seem to consume all light from the page around them. Using mezzotint in combination with chine-collé allows Caulfield to make his images into tiny, intense gems neither page nor mind can contain.

Of course technique doesn’t interest everyone, but these offer the print audience novel effects useful in the pursuit of visual experiences uniquely fitting to our time. Taniguchi’s images suggest that nature, our connection to insight and the deeper reality underlying our life of illusions, may be fading beyond the reach of sensation. We are often careless, but it’s not as though carelessness can put an end to the natural world. Rather, we are the ones in danger—of losing the source of our knowledge and the wisdom to know our place in the world. 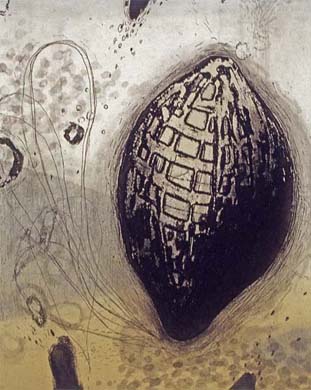 If Taniguchi evokes our estrangement from nature — the impact of living in cages, so to speak –Caulfield is interested in our grasp: in the gap between what we encounter and our ability to comprehend it. Where she focuses on effect, the cause concerns him. His creatures are more robust than hers precisely to make this point. In “The Approach,” he locates the error whereby we employ and exploit mysteries we fail to penetrate first. The scientific apparatus surrounding so many of his creatures suggests both a means of approach and its limits. “Field” vividly captures the familiar but rarely noted experience of coming upon an unfamiliar technology that we, despite our sophistication, find opaque. Is it an instinct that makes us reflexively dismiss alien knowledge and methods as inferior to our own?

The trees, rocks, and water Taniguchi depicts commonly evoke spiritual associations. Caulfield is engaged in a suite of prints meant not to illustrate Dante’s Divine Comedy, but to restore through images the deep emotional connection to its ideas that moved Dante in writing it. In them, space opens up into a luminous landscape. The artists’ motives should not be confused, however, with the way formalized religion presumes the mysterious to be benign or transparent. Two crucial debates of our time come to mind: whether we can survive in a natural world we have decimated, and how we should behave among heterodox peoples and cultures. Akiko Taniguchi rephrases the first question: not can we? but should we? Sean Caulfield reminds us that the things we don’t understand are not therefore any less real than we are, and that while we cannot just ignore what unsettles or frightens us, the object of confrontation is understanding: or as Burke would have it, delight.

And delight awaits, in the prints of these two young masters. 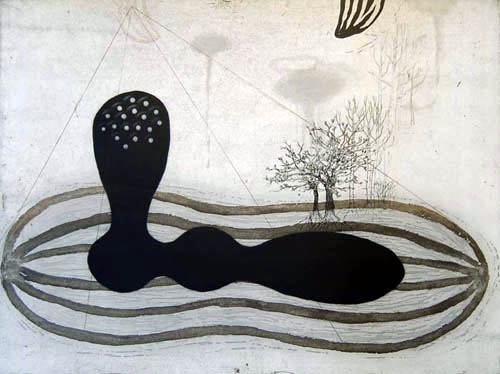 Prints by Sean Caulfield and Akiko Taniguci will be on view at Saltgrass Printmakers through July 31.