As a follow up to our article on the history of the serigraph in Utah, we take a look at three Utah artists working with screen prints. 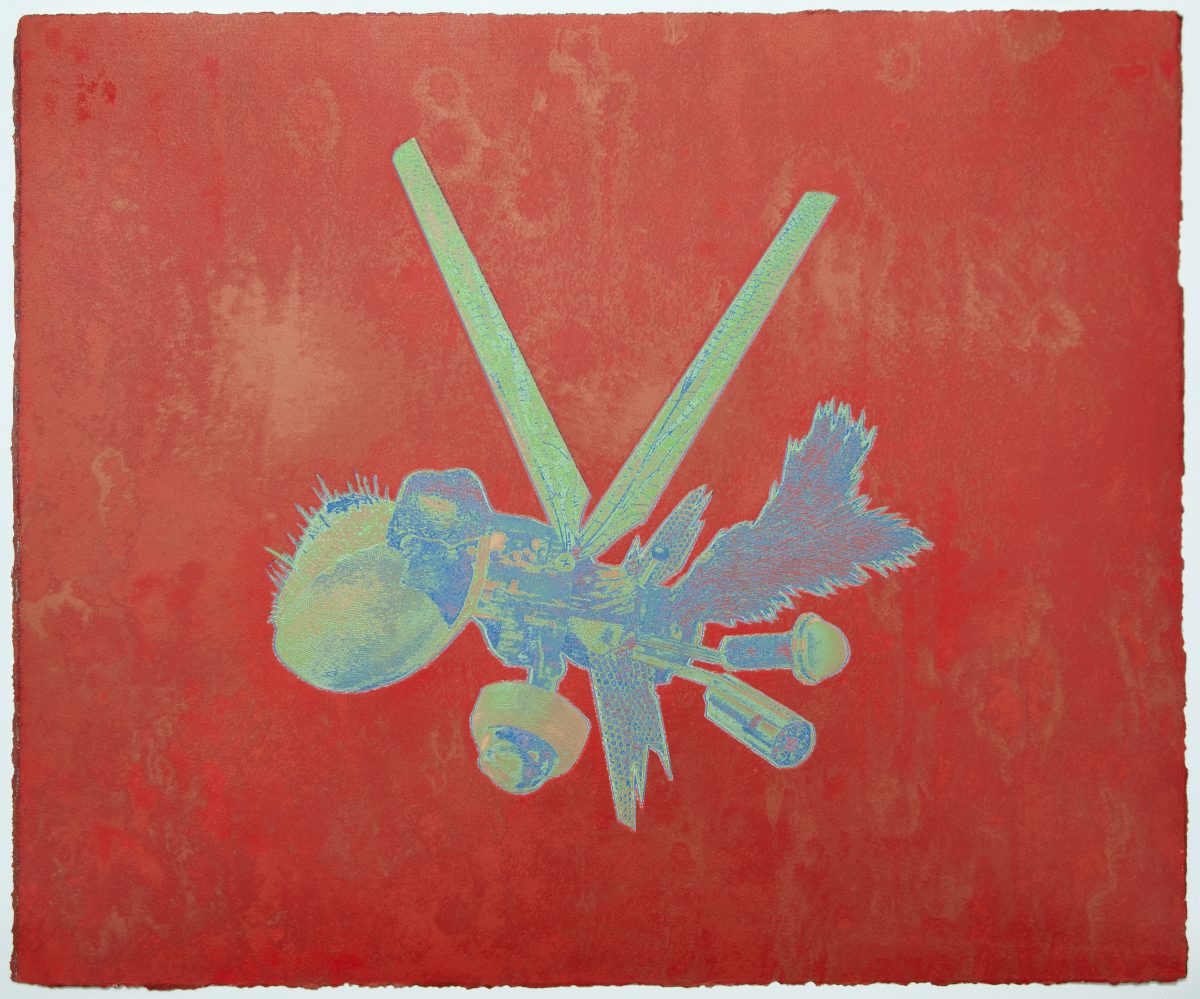 Justin Diggle’s “Bug Drone 1,” 2020, is one of 3 similar but different laser-engraved screenprints, part of a series related to “the growing use of drones, and particularly to their small size. Drones that literally are a fly on the wall.”

University of Utah professor Justin Diggle is known for the deep, rich qualities of his etchings, so you wouldn’t think that close to half his work these days is done using screen prints. But that’s because he can make a technique best known for printing t-shirts and concert posters create the textured look of etchings.

Screen prints were something Diggle studied for his undergraduate degree (Bristol Polytechnic, in his native UK) but he didn’t really start using the process in his studio practice until about 2003.

“When I create screen prints, I want to create a tactile surface,” Diggle says. “In the past this has involved scratching into the ink, using sandpaper, etc. and then reprinting — a process that is similar to how I work an etching plate or a drawing.”

Because each color requires its own screen, if you’ve ever ordered screen printed t-shirts, you know the price increases every time you add a layer — keep things to two or three colors and you’ll be within budget. For Diggle’s current work, laser-engraved screen prints, he’s going in about 30 layers. “For these I create screen prints that have about 30 layers plus flat ink. These layers are comprised of about 4 colors, each printed 8 times or so with white layers in between. As each new color layer is printed the previous ones are hidden. These prints are then laser engraved with an image that has been created as a traditional cut and paste collage that has been scanned into Photoshop and modified slightly. As the image is engraved into the ink the darker areas of the image cut deeper and reveal the first layers of color that were printed. Medium gray areas reveal the middle layers, i.e. they do not cut as deeply into the print. The resulting image is then revealed by the process and has a physical surface similar to a deeply etched copper plate. I then work on the image with more screened layers of colour/textues/designs.”

Much of Diggle’s recent work in screen print deals with surveillance. “Surveillance Portrait I” (below) is from a series of 5 images that are structurally similar but have different color schemes, influenced by the colors on airport luggage scanning machines that match color to different materials. “The main image is from a paper collage and is a representation of those who surveil in some form,” Diggle says. “Although there are many positive aspects to surveillance it is also commonly abused and is becoming a pervasive part of our daily lives. 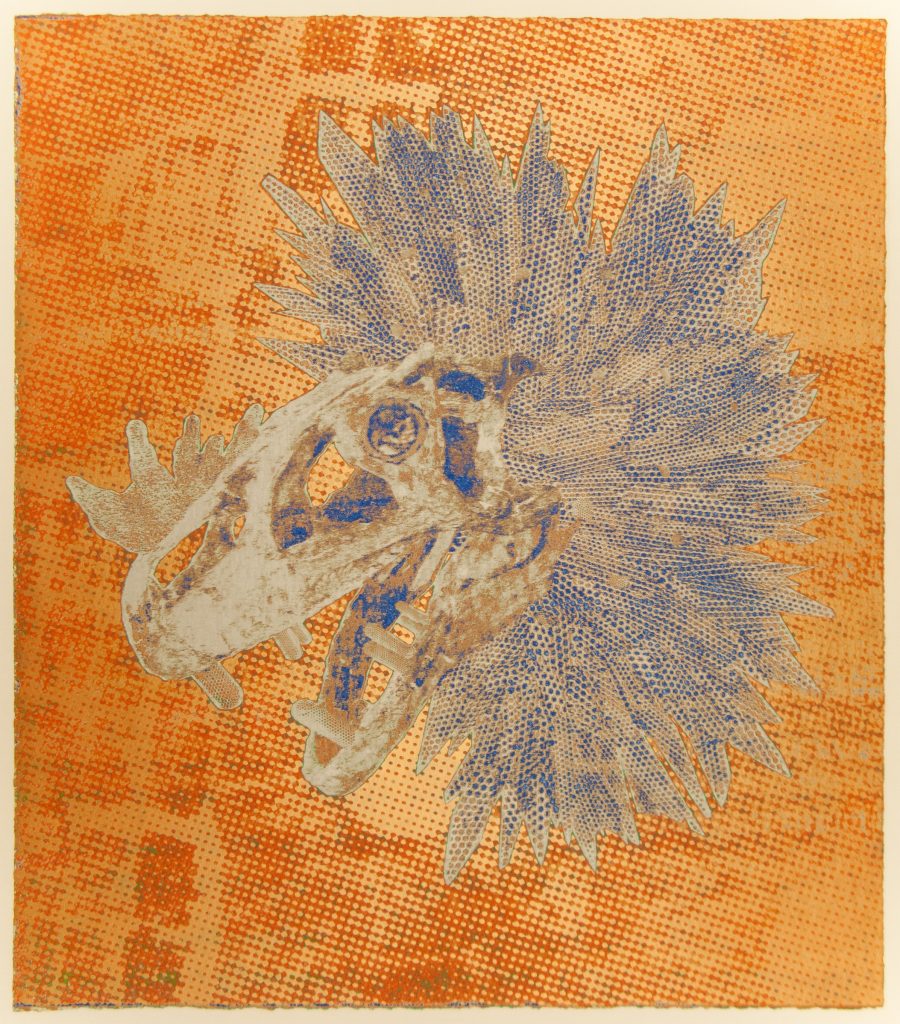 Stefanie Dykes, director of Saltgrass Printmakers, attended the University of Utah for her masters degree just when Diggle was getting back into screen printing and learned the techniques from him. She calls the process part of her “printmaking trinity:” Etching-Relief-Screen.

Screen printing is attractive because of its versatility, its ability to produce “bold colors, simple shapes, drawn qualities, and delicate photographic details. Screen prints are created with stencils. Stencils, which are exposed to the screens, are limitless in their possibilities: hand drawn elements, found objects, simple cut outs, ink washes to digital printed imagery. We can draw and paint directly onto the screen and squeegee directly on to the paper for monoprints – skipping the exposing & developing steps. “

Developed as it was in the 1930s, screen printing was from its inception connected to political activity and Dykes continues that tradition in her own work. 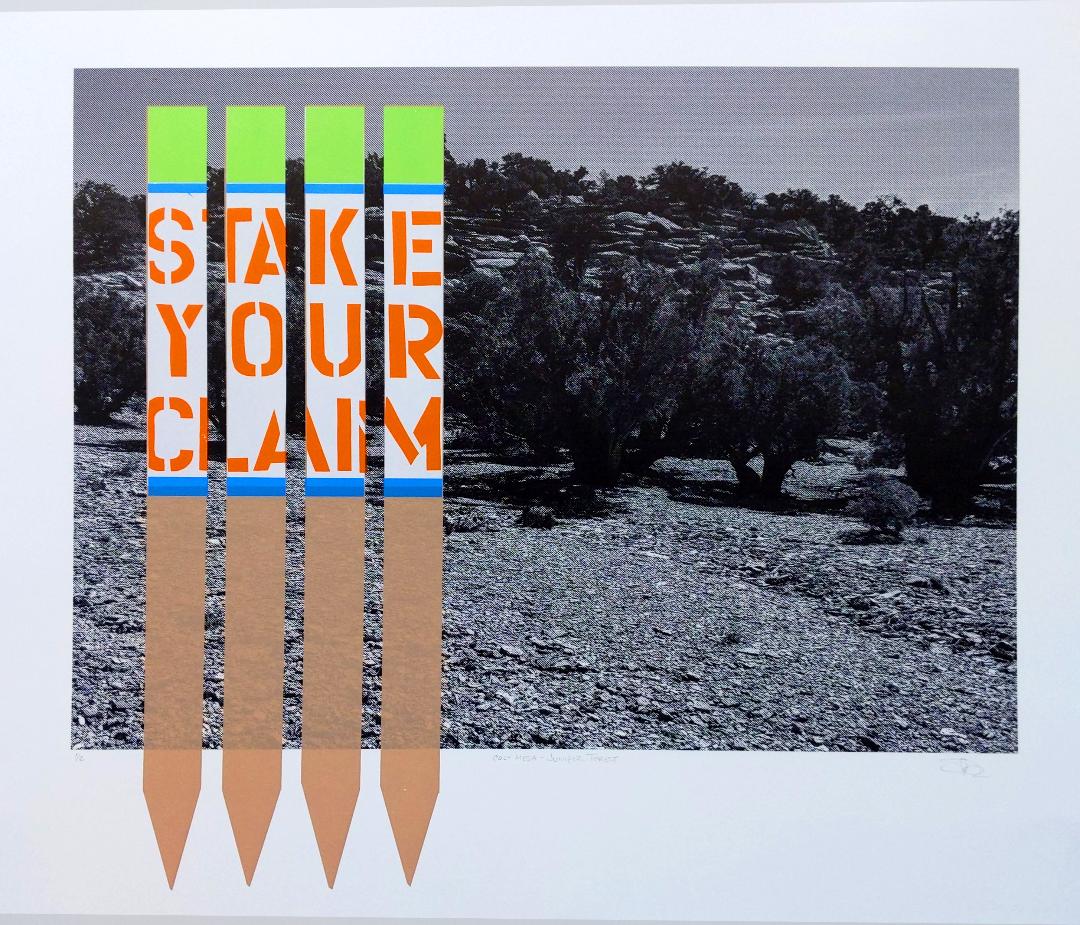 Stake Your Claim, a body of work Dykes exhibited at Artists of Utah’s Utah’s 15 in 2019, addressed the reduction of the Grand Staircase – Escalante and Bears Ears national monuments. 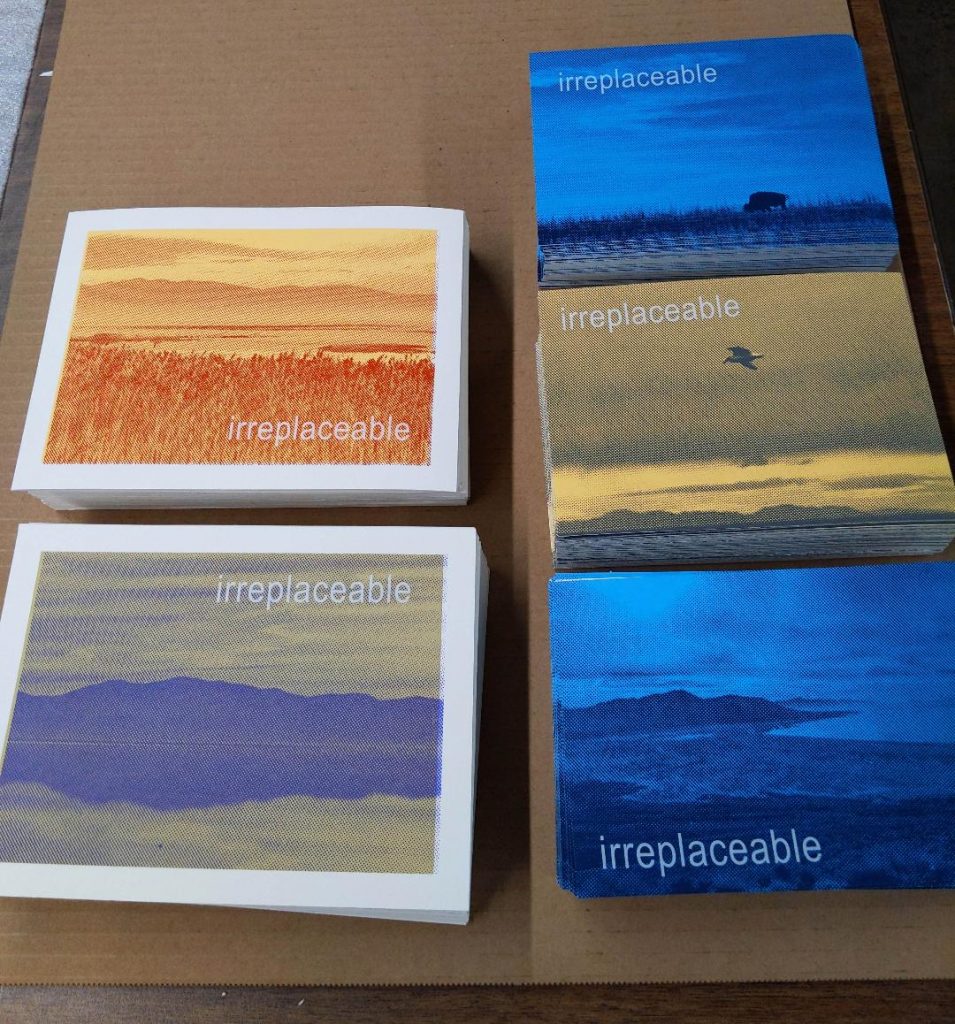 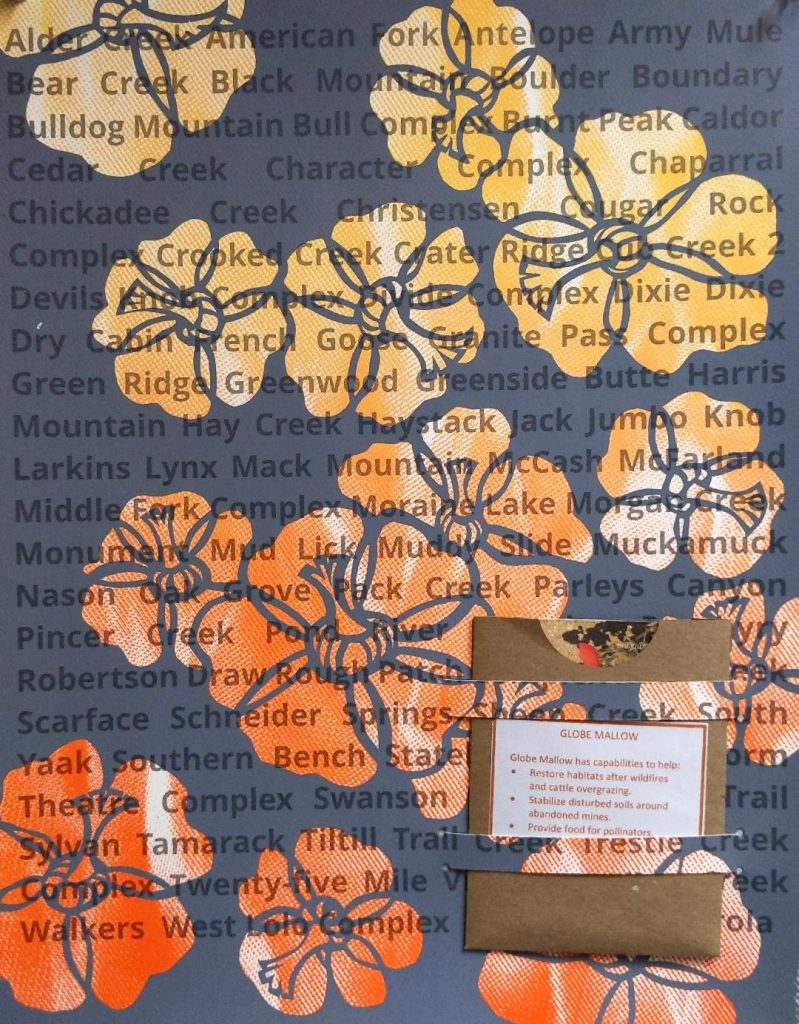 Most recently, for the Communities West biennial portfolio exchange, Dykes created “82 Fires At Press Time,” a screen print highlighting the ability of Desert Globe Mallow to restore habitats after wildfires.

Dykes is currently working with Citizen’s Climate Lobby to produce 500 9-color screen printed postcards that CCL is hoping to use to raise awareness in our community and with legislative representatives.

At Saltgrass Printmakers, Dykes has to share the screen print equipment with artists like  Anna Bugbee, who learned screen printing while earning her BFA at New York University. “I was drawn to the medium because of its ability to create a large edition relatively easily. It’s the quickest and most efficient form of printmaking and it allowed me to share my work with a wider audience by being able to make lots of copies of my drawings.” 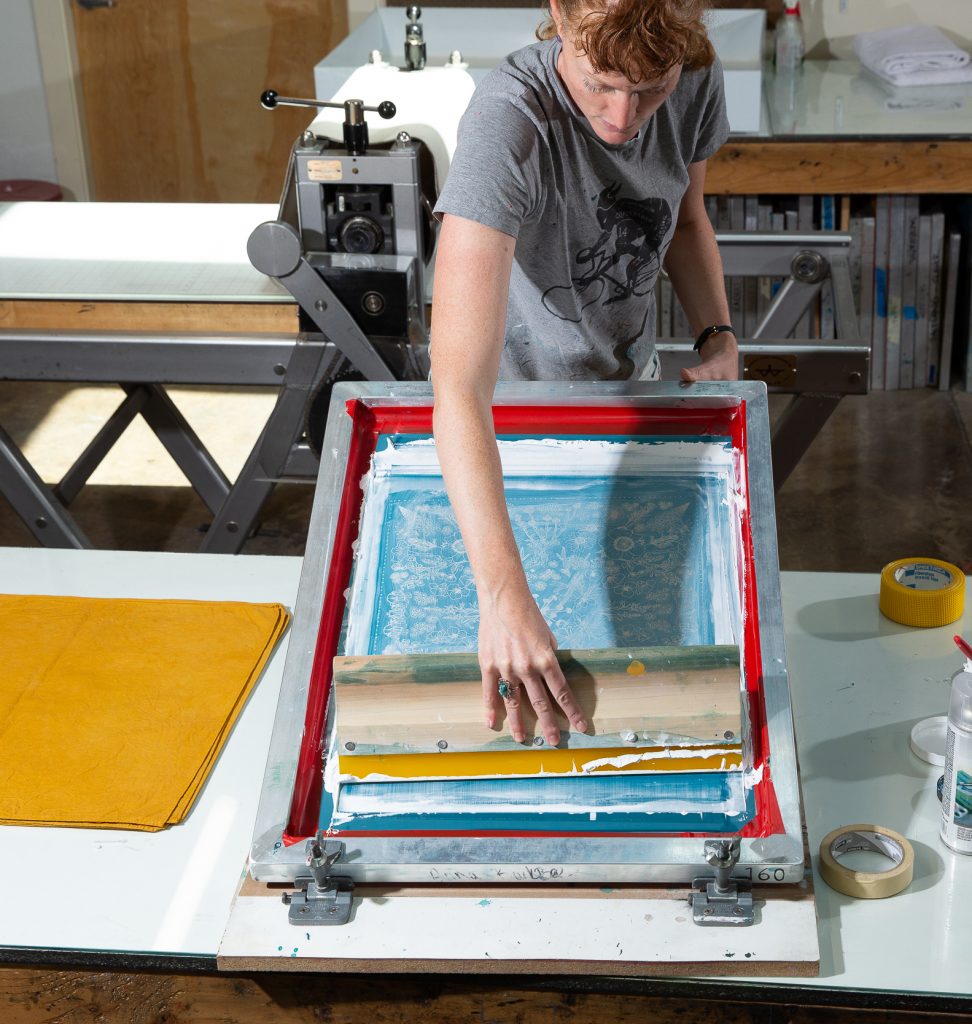 After graduating, Bugbee got the printmaker’s dream job, working at a fine art screen printing studio in Brooklyn.  It’s now called Powerhouse Arts, and is run by master printer Luther Davis. “I learned an incredible amount working there,” Bugbee says. “We worked with artists from all over the world, printing art that ended up in galleries and museums.” Screen print shops will work with artists to develop an image that will work well as a screen print. They try not to hamper the artists with mundane issues like size. “Our biggest screens were 10 feet long and we would sometimes tile those together, making massive prints on canvas or large wooden panels,” Bugbee says. “We also did paper editions, with edition sizes of up to 500 with 26+ colors, printed on a semi-automatic press, meaning the press pulls the squeegee for you but you still have to set up the registration. It was a super fun job and I am really grateful that I had the opportunity to work there.”

After working there for three blissful years, Bugbee could no longer ignore the pull of Utah’s mountains (she’s a Logan native). Plus ,she wanted a flexible schedule and time to work on her own art. “Since settling in Salt Lake City, the mountains have been very influential in my work,” she says. “I am inspired by the geography and ecology of the Wasatch, and feature local plants and mountains in my work.” 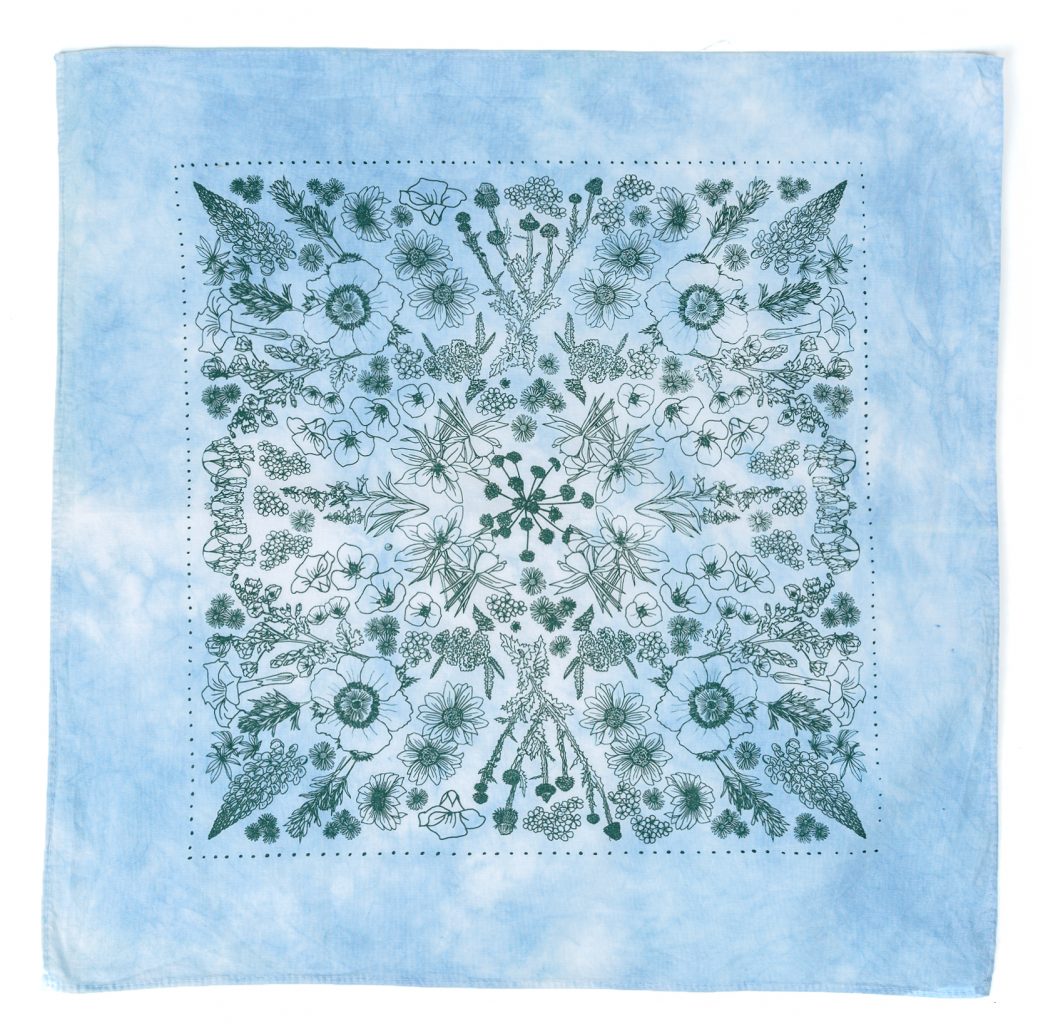 This hand-dyed cotton bandana by Bugbee features 15 different species of wildflowers that can be found in the foothills of Salt Lake City and throughout the Wasatch mountains, all drawn by hand. Bugbee sells each one with a wrapper that has the names of all of the flowers featured. 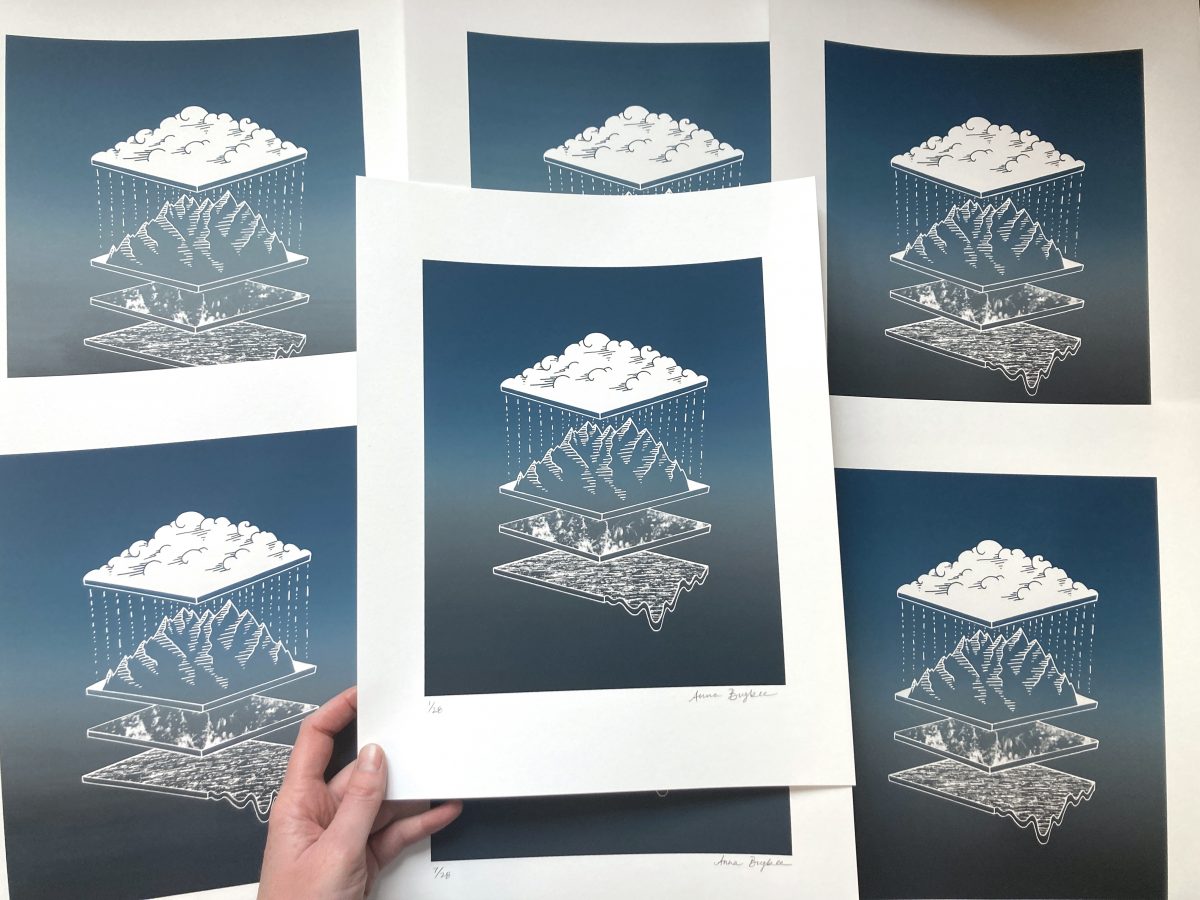 “Watershed” (11 x14 in.) is an edition of 28 that features a four-color blend on stonehenge paper. This print is inspired by the fact that much of Salt Lake City’s drinking water comes from the snowmelt from the Wasatch. The layers represent the path the water takes from the sky to the mountains to the valley, going underground and through the landscape. The layer below the mountains is a halftone photo Bugbee took of wildflowers in Albion Basin at Alta.

If you’ve ever spoken with a printmaker, you’ll have noticed they can get techy pretty quick, and like to experiment with their process. Bugbee is no different. She likes to use a technique that “involves using multiple colors of ink on one screen and blending them together to make a gradient. I like it because it’s a way to get a multi-colored print without having to use multiple screens.” It’s called a blend, a rainbow roll, split fountain, or gradient. “I think the variations of colors blending together can be really beautiful.”

Bugbee also does relief printing, cyanotypes and indigo-dyeing, but screen printing is her main medium. It’s a fast process, which keeps her prices affordable for local markets where more people can experience her work.