“I was planning to fail in my own way. I thought that was the point.” 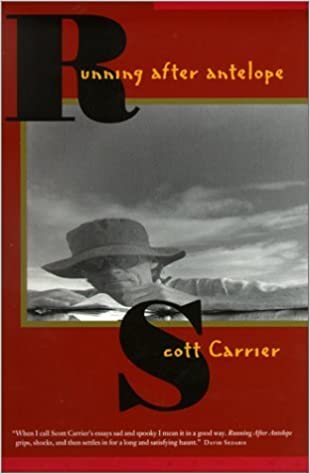 Among the benefits of public radio, which began half a century ago seeking, unsuccessfully, to liberate the airwaves from corporate control, were the many outlets it created for telling intimate stories to a large audience. David Sedaris, Sarah Vowell, John (‘Hi! I’m a PC’) Hodgman, and numerous lesser-known but similarly talented authors got started by being heard in odd moments by an audience who just left their radios on, like so many spread nets, hoping to capture something compelling.

Salt Lake’s Scott Carrier was one. In the 1980s, his childhood dream to capture antelope without weapons or tools, using a supposedly prehistoric strategy of chasing them until they were exhausted and gave up, inspired one of the first radio essay series to combine science and adventure. Harassing the remnants of a nearly-extinct species for entertainment might have seemed cruel, had the narrator not connected it to human evolutionary history. The conviction that prehistoric events determined, and might help understand who humans are benefitted from a somber narrative tone and close observation of how the world’s second-fastest land animal observed, over its shoulder as it were, its dubious pursuit by one of the slowest. Today, it’s accepted that lack of body hair, vertical posture, and bi-pedal gait gave humans stamina in place of speed, and with it rare survival benefits, but Carrier was among the first to go public with the idea.

In 2001, the appearance of Running After Antelope in print coincided perfectly with my arrival in Salt Lake City. It rekindled my interest in a reporter who had parlayed his success chasing antelope — in stories told on All Things Considered and This American Life, if not on the desert Utah terrain — into a unique combination of travel writing and skeptical public journalism. The book alternates the title story, divided into what might be thought of as twelve annual progress reports, with stories that follow the expansion of his personal life as the curiosity that drove him when he was six propels his adult self further into the world. No doubt because they were written originally to be read on the radio, each is essentially self-contained, though linked by the continuity of a growing self-awareness. They retain this accessibility in print: no less deeply thought or felt, but less daunting, or alienating, to read:

Last night a thunderclap woke me from my sleep. This morning there’s new snow on the mountains, six to ten inches at ten thousand feet. It will be gone, melt and transpire, before the sun sets. The first storm of the season, the smell of the furnace burning the summer’s dust.

I stay in Salt Lake. I try to leave, but it seems like I have a rubber band attached. What is it that pulls me back? No place is more beautiful than the Salt Lake Valley. Other places are just as beautiful, but when it comes down to a contest, this place wins. Beauty is something to be studied over a long period of time, and there needs to be some point of reference — these clouds over these mountains, compared to what? The city itself has the most admirable quality of a ghost town, dry as a bone and empty as a rattle. People are leaving in droves for a better life on the Coast. I, however, wait for the coast to come to me.

Running After Antelope begins and ends with a pair of brothers chasing after the wild animals that cohabit their environment. They’re not after food; their hunger is for understanding. In time it becomes apparent that animals are important clues to the places they inhabit. As Scott Carrier’s radio journalism takes him further afield, to Mexico, then Cambodia and Kashmir, the curiosity that captivated him as a child, about wildlife and the environment that animals both choose and modify, merges into the primacy of place. Everywhere he goes, the beauty of the landscape is what connects him with the local populace. Too often, his sponsors want reports about how well things are going in the places they send him, but his skepticism and disinclination to take anyone’s word before he sees for himself cuts through lies and fear alike. Salt Lake is a high desert between snow-capped mountains. Cambodia is a rain forest cut through by vast river systems. Kashmir is the only passageway through impassible mountains. Each place has fostered particular plant and animal life, followed by specific human cultures. Now each of these elaborate systems is under assault and in danger, has been since long before the people who dwell there and depend on it became aware of what’s happening.

For Carrier, chasing antelope proved less depressing than sussing out human deception. He didn’t write another book for a dozen years. Then again, maybe he didn’t see a need: reading his deja-vu promoting account, from 1994, of an argument between rebel leadership and a corrupt government over the citizens’ choice to wear masks, it comes clear that everything in Running After Antelope still has relevance: is as true and important as it was twenty years ago, when it made the transition from that day’s radio to the permanence of print.