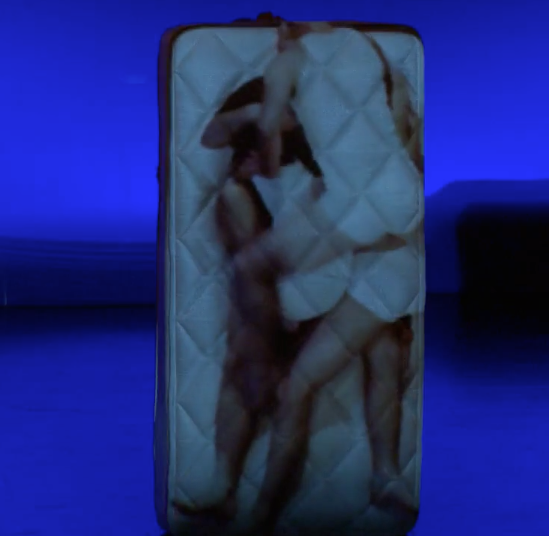 Sex, religion, gender, race, art, and drugs. All of these topics were confidently (sometimes cockily) juggled by SB Dance’s The Pushers, all the while gliding through the wine and beer that was served to audience members. The show is truly a modern day cabaret. Each attendee was given a velcro-backed seat marker to hold their place while they moseyed up to the bar and mingled amongst the high bar tables that scattered the stage. Eventually company members, Nathan Shaw, Juan Carlos Claudio, Christine Hasegawa, John Allen, Annie Kent, Florian Alberge, Dani Diaz and Stephen Brown himself trickled into the pre-show party, bringing with them the buzz of imminent performance. Purposeful conviviality abounded. Everyone present seemed to know that they were a vital part of setting the mood for the rest of the evening.

Around 8:45 the house lights dimmed and each audience member began to carefully find their seat, glass in hand, possibly considering what would happen if they remained onstage. They might have been forced by John Allen to take a shot (of what was supposedly hard liquor). He did just that to Christine Hasegawa, cradling her head, throwing the liquid down her throat and letting her recover, just to accost her system with another, and one more, and one more, and one more. This demonstration of power and submission recurred in other parts of the show and sometimes the gender roles were switched, but it was apparent from the onset that we were seeing a show through a primarily male lens.

The scene eventually morphed into a more upbeat one. The tables were removed, and SB Dance’s signature pole entered. Then the entire cast accelerated the show, walking fast and dipping underneath the fifteen-foot-tall pole held limbo-style by two or three people. Curtis Mayfield’s “Pusherman” accompanied this movement sequence, which became the interim activity for the entire show. The pole was expertly wielded by each company member like a weapon of fate, forcing others to duck out of the way; or it was held perpendicular to the ground and became a stripper pole that catapulted individuals above their counterparts to slither down to the ground. The movement in the show was intensely physical, including many lifts and group-dependent formations. This physical prowess supported the overtly sexual positions that the dancers landed in so naturally. Repetition of movement and verbal lines sometimes highlighted farcical situations and at other times simply energized the show–– the repeated lines becoming mantras.

Continuing in traditional cabaret fashion, Stephen Brown was the master of ceremonies, contextualizing the sex, drugs, and alcohol with anecdotal monologues about his life as a young, straight, male dancer in New York City in the eighties. Juan Carlos Claudio augmented these stories tremendously by acting the part of a quintessentially gay Puerto Rican: excited about sex, constantly erupting with emotion. The show took some poignant turns, acting as an homage to victims of AIDS in the eighties. Brown’s rehearsed lines on this subject were somewhat moving, but what was more moving was the vibrant energy of the show as a whole, demonstrating the legacy of the young artists that were being remembered. The performance was a celebratory wake rather than a morose funeral. It paralleled Patti Smith’s memoir Just Kids, about her life in New York City as a young, lost artist with the late photographer Robert Maplethorpe. One of the most charged scenes in the show was set to Smith’s “Horses.” The hypersexual nature of the show referenced Robert Mapplethorpe’s photography, which also focuses on sex and sexuality, BDSM and human vulnerability.

SB Dance has a history of pushing conventionally taboo subjects into the public’s (or at least their audience’s) eye. Sometimes it seems to be in direct response to conservative antics, but the alternately passionate and deadpan demonstrations of desire, confusion, and power come from personal experiences of the seasoned group of people that make up the company. The Pushers is scrumptious for the eyes and revealing for the mind. The show will continue this weekend, June 13 and 14 in the Rose Wagner Blackbox. For more information visit www.sbdance.com.

Emma Wilson is an intern for loveDANCEmore, studies dance at the University of Utah, and performs with PDC and in Porridge for Goldilocks, among others.