Save the Oceans, Fill the Galleries: Artists at BDAC Turn to Disposable Plastic as a Medium 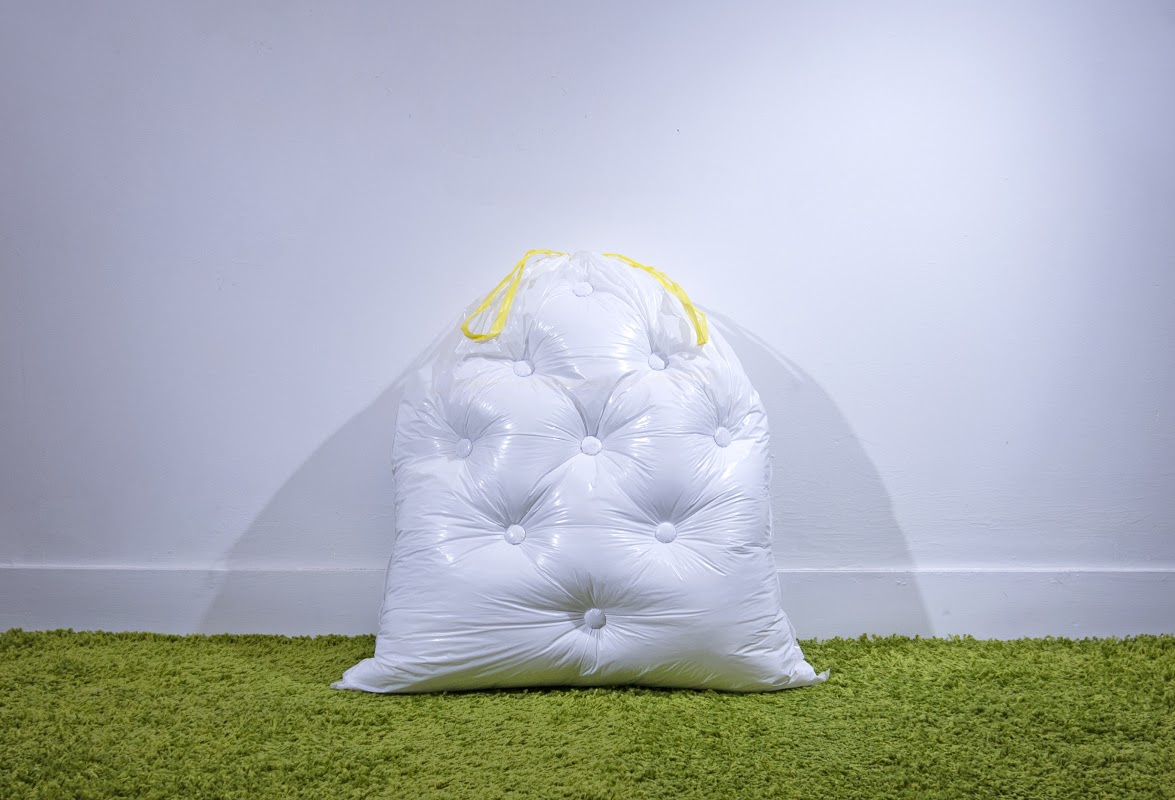 Disposable plasticware is advertised as a convenient alternative to washing dishes, but are disposables really more convenient? With plastics clogging the ocean, factory waste, climate change, and multi-billion dollar initiatives needed to pull the earth back from the brink, we are being killed by disposables. However, convenience has become almost synonymous with American culture. Our homes are built for convenience, with dishwashers, dryers, smart house technology, and garages for the cars most of us have. To a good portion of the world, America, and especially suburban America, seems undeniably rich, a place where life is easy. This month at the Bountiful Davis Art Center, trash and disposable society is explored by two exhibitions, Between a Site and A Home, featuring art from Madison Donnelly and Christian Casas, and Kristen Baird’s Inherited.

Like many of our modern cultural norms, the heavy production of disposable plastic and synthetic materials began in World War II. Polymers were produced as a way to stimulate the economy and replace necessary natural materials, like the silk in parachutes, with synthetics. After the war, we kept producing plastic. The economy was booming, fast food and prepared foods were on the rise, and, more importantly, consumers had enough money to purchase products. It took barely 20 years of heavy plastic production before Americans began to be concerned, noting the amount of waste we were producing as early as 1968. By then, though, the economy depended on producing these synthetics and the allure of convenient, cheap, easily replaceable materials was strong: packaged food is easier, seems safer, and requires less effort than cooking; single-use items save us from the arduous tasks of cleaning and storing.

Casas and Donnelly’s exhibition explores our relationship to disposable objects. Casas’ “Industrial Bouquet” is a collection of yard flags, the kind we commonly see after grass has been sprayed or construction sites are marked. These brightly colored flags stick out of the ground, like flowers, and Casas’ presentation inside a glass vase strengthens that connection. To see cheap plastic flags on a pedestal, in a vase, set in what appears to be cement, is unexpected. The vase stands on a bed of green carpet that looks like grass, heightening the association with lawn flags. This form and function steps outside the norm, asking why we don’t value these pieces as decorative ornaments the same way we do flowers? Cutting a plant to make a wedding bouquet is not unusual at all, but can you imagine a wedding where the wedding party holds plastic lawn flags? 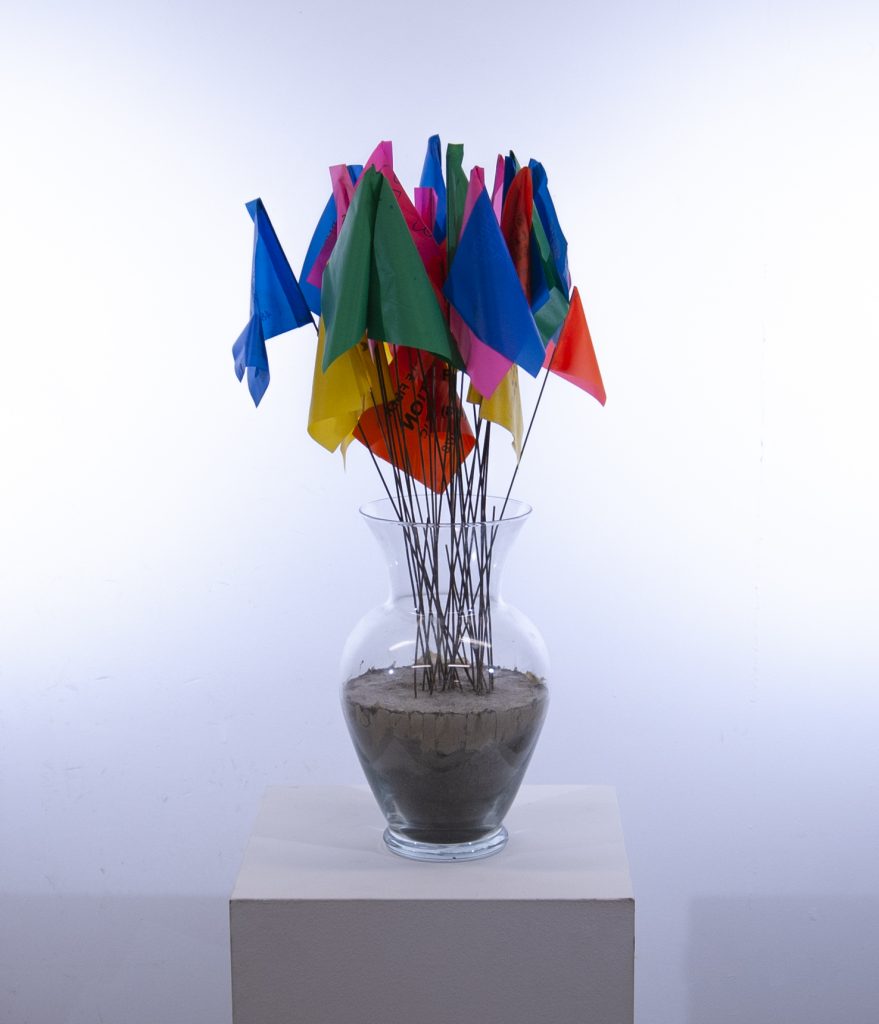 “You, Me, and Sucky Makes Three,” a collaborative piece by both artists relies on an unusual juxtaposition of two household objects — a robot vacuum in a playpen. The title plays off the phrase “you, me, and baby makes three,” with connotations of “you, me, and convenience,” “you, me, and presentation,” “you, me, and the life the way I want it to look on the internet.” Placing a vacuum in a playpen also renders it completely purposeless, no longer able to roam a house freely to clean, now contained and unusable. This idea of unusable “useful” items is common throughout the exhibit; corn holders are woven together in chain mail so they can no longer hold anything; a transparent shower curtain made of bubble wrap fails in its mission to protect items; plaster casts of carpet cannot be used for floor covering. The exhibit asks if disposable items still have value when not put to their intended purpose.

Baird also uses disposable materials, but with a different twist. Her exhibition focuses instead on how we learn skills from previous generations, particularly how she learned crocheting lace from her grandmother. Instead of lace, Baird uses plastic bags in her work, repurposing a disposable plastic into something beautiful. It calls to mind plastic bag mats created by several different charities for the homeless and refugees, repurposing one of the scourges of our wild places as a humanitarian effort. Baird expertly forms this slippery material into three different featured patterns — Estonian Lace, Shetland Lace, and Aran Cables — each unique and developed out of isolation and necessity. Aran knitting particularly was a method of survival, the harsh Irish climate necessitating warm, waterproof and windproof clothing for fishermen and sheepherders. 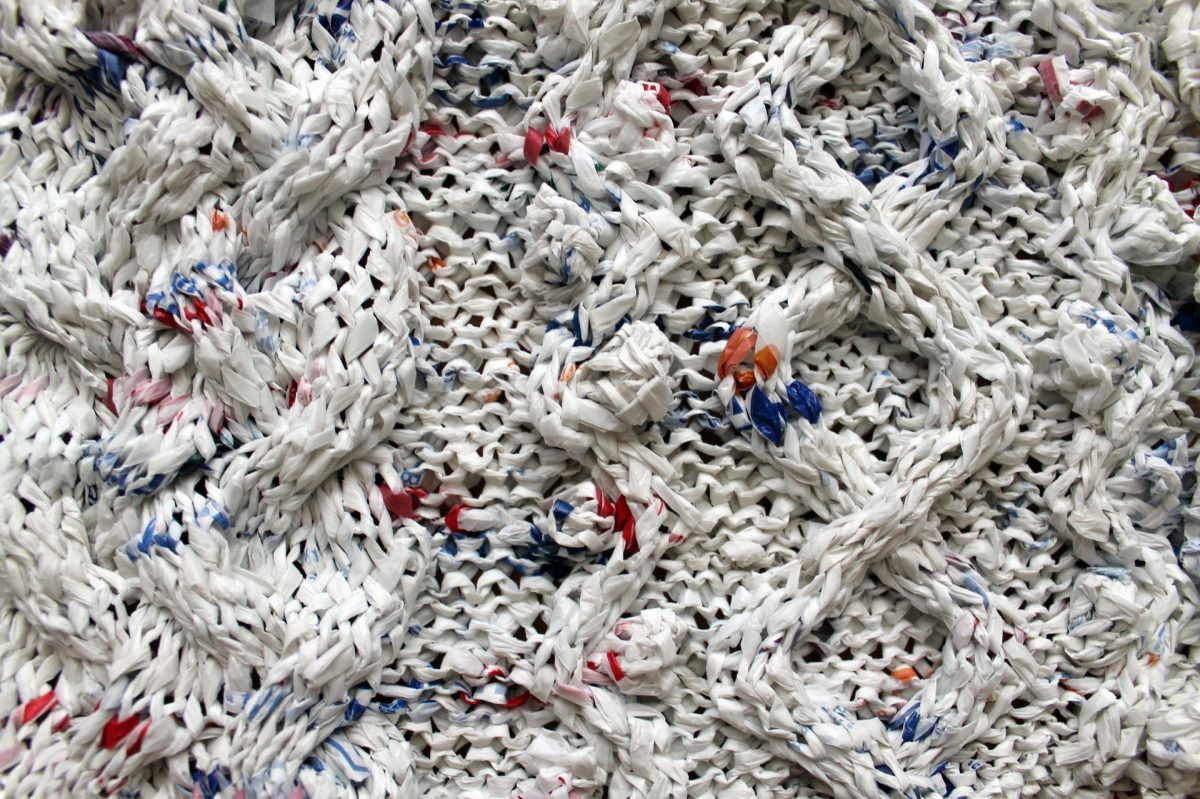 Baird’s exhibit questions the sustainability of cultural identity in the digital era. The world is becoming more and more of a melting pot and with that, fewer traditions are honored and cherished. Before Youtube, the way to learn was to find a mentor, often someone in your own family, who would teach you a skill. Handicrafts are part of every culture’s memory and an important part of their identity, but few cultures pass on the knowledge of creating these crafts anymore. In the rush to open the world and connect markets, we risk sacrificing culture and identities that can be lost, often irretrievably.

Both these exhibits look at our relationship with disposable items and question their usefulness and function. Disposable items can be repurposed to make something new, interesting, and valuable, but are they the same item outside of their intended purpose? Are repurposed items still as important to our culture as disposables? Can our disposable culture become one that values the time and dedication necessary to learn handicrafts? These questions and more are inspired by these artists’ works.

Between a Site and a Home: Works by Madison Donnelly and Christian Casas and Kristen Baird’s Inherited, Bountiful Davis Art Center, Bountiful through June 28.