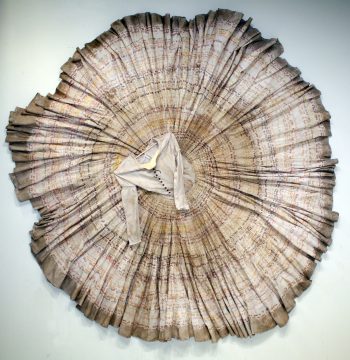 Sara Lynne Lindsay’s work springs from the belief that we are all at a pivotal place on the continuum of creating rich or poor soil for the next generation, a belief that individual actions affect the environment we are creating.

Inspired from her mothering of six children and the sacrifice that accompanies it, she visualizes nature as a parallel to the self, illustrating the generational strength of women. Soil stands as a symbol of the lives that came before her and the environment they cultivated. Evidence of what was living and found above the ground eventually makes its way into the soil for the next generation to be nourished by. An untold amount of subtle conditioning, be it emotional, spiritual, financial, and physical are passed on from her ancestors.

Growth, decay, sacrifice, and evidence are all common themes. Lindsay incorporates both natural elements: dirt, seeds, gravity, flowers, and plaster – and domestic elements: sewing, knitting, cooking, and ironing in her artworks. The material choices are familiar as they originate from her sphere of daily work – mother, wife, gardener, and artist. Believing that individual choices play a pivotal role creating a ground for the future to thrive in, or suffer through, Inherited Ground surveys the role of interconnectedness in human development.

Sara Lynne Lindsay grew up in San Jose, California and considers Lubbock, Texas home, where she lived for 15 years. In 2000, she received her BFA from Utah State University. Since graduating, she has been raising six children, exhibiting nationally and internationally, and serving as a board member to the nonprofit organization Sites Set for Knowledge. She recently made the decision to return to graduate school, and is working on her MFA at Brigham Young University. Lindsay has collaborated with musicians, received multiple grants, was shortlisted for the Texas Biennial in 2017, and curated a number of exhibitions for other artists. Her performance videos Gendering Chris Burden’s TV Ads were recently exhibited as YouTube commercials along the Wasatch Front in Northern Utah. saralynnelindsay.com