SALT Contemporary Dance’s Fall ‘21: A Return to the Stage featured works by renowned  choreographers Garrett Smith, Ihsan Rustem and SALT’s Artistic Director Joni McDonald. This  particular show was meant to premiere in April 2020, but when it was postponed due to the  pandemic, SALT continued to develop and rehearse it until it was time to take the stage again.

“It has never meant more to us, to be here and to have you here with us than it does now,” said  SALT Contemporary Dance President, Michelle Nielson as she introduced the show. It was  evident in the dancers’ larger-than-life performance that they have been eagerly anticipating  sharing what they have been working on for over a year.

I expected to experience a sense of disjointedness, considering each of the three works were  created by different choreographers, at different times, and with different intentions. Each segment did indeed have clearly distinct qualities. However, the dancers’ authentic connection as  a group as well as their commitment to expansive, dynamic movement were enough to create a cohesive evening of movement and emotion.

The show opened with Garrett Smith’s “If We Linger,” which was originally premiered on SALT in 2015. After a satisfying moment of established cohesion in the beginning of the piece, the  majority of the work explored a sweeping, expansive use of space. The continuous movement of  dancers on and off the stage kept my eyes moving and the momentum flowing. The theme of  lingering was clear with the intentionality of each entrance and exit, whether brief or extended. When individuals, duets and trios did linger on the stage, they demonstrated striking musicality  and seamless, intricate partner work. I enjoyed the moments of aggressive, manipulative  relationships between dancers as well as playful, mischievous connections. A boisterous laugh  from SALT dancer Haley Johnson signaled an abrupt shift in the fast-paced music and  movement, bringing all dancers back on stage for a section of group work. This startling laugh would have been a sudden, yet satisfying end to the piece. Smith instead opted for a more  predictable bookend approach, closing with the tight formation and gestural movement that  opened the piece.

The second work of the evening was “After Discussing,” choreographed by Joni McDonald. “This piece was designed to explore dynamics and range in a way I had been craving,” says McDonald in the show’s program. The lighting, music and movement fulfilled McDonald’s intentions. The  piece featured distinct segments marked by stark shifts in music, movement quality and most  notably the bright color of the stage backdrop. The piece as a whole did not feature a discernible narrative, but instead explored a broad range of emotional tones. I enjoyed seeing movement  motifs change meaning as they appeared in the different color-segments of the piece. The  repetition of a casual skip around the stage felt entirely different in front of the deep red  backdrop versus the sky blue. Throughout the piece, the SALT dancers further demonstrated the spacious, skillful movement they had shown from the very beginning of the show. “After Discussing” undramatically ended mid-sentence, allowing the dynamic nature of the piece as a  whole to speak for itself. 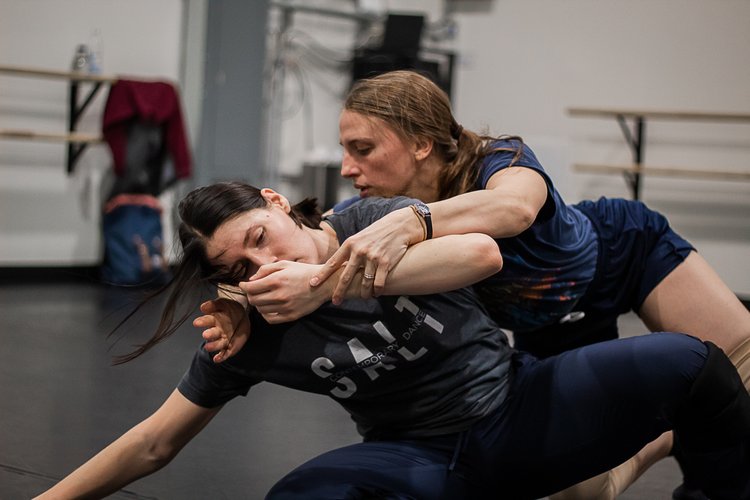 Finishing the show with Ihsan Rustem’s “Long Story Short” was a beautiful choice, as it features a captivating range of emotional tone and an incredible display of artistry and skill. The show’s  program shared that Rustem’s intent for the piece was “an exploration of how one may progress  from questioning to clarity, as one chapter ends and the next begins.” Through strong, technical,  expansive duets, solos and group work, Rustem and the SALT dancers dove into an exploration  of the intense turmoil of questioning. Dancers emerged and disappeared from the low-lit upstage,  creating a depth of field one does not typically experience when watching on-stage works. This  lighting choice along with the vehement narration of Allen Ginsburg’s “Howl” set an ominous,  uneasy tone. The dancers, too, oozed with a restless, confrontational tone that reawakened my  senses. The dancers did not hold back in their direct, glaring focus or in their tremendous range  of movement. It was incredibly satisfying to witness each dancer embody such assuredness in  their solo work and then see them all move cohesively. The movement slowly became patient  and flowery, dancers blooming, sweeping and settling after such an extreme build of intensity  and turmoil. This contrast spoke to the breadth of emotions one experiences in a period of  questioning and demonstrated the ability of these dancers to dive into opposing ends of physical  and emotional spectrums.

In this beautiful show, the voice of each choreographer was distinct and clear, as well as the  voice of each dancer. The SALT dancers moved together with connection as a collective, while  still offering their individual artistry. This allowed me to connect with the work in a way that I  am not able to when I see dancers cleaned into conformity. Fall ‘21: A Return to the Stage was a  stunning confluence of artistic voices that demonstrated SALT Contemporary Dance’s expertise  as collaborators, creators and performers.

Elle Taylor is a BFA candidate at the University of Utah’s School of Dance.