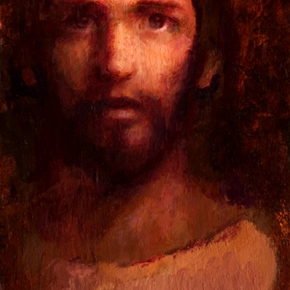 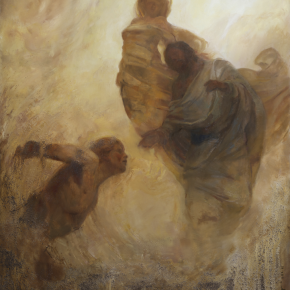 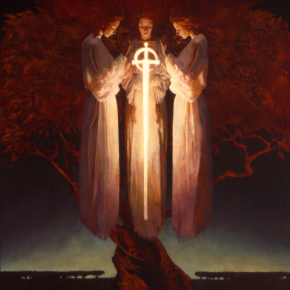 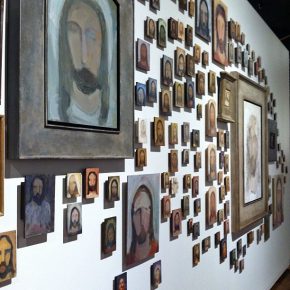 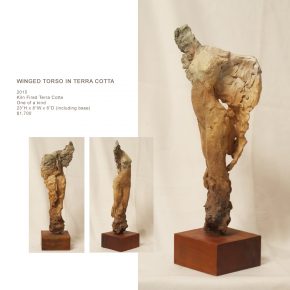 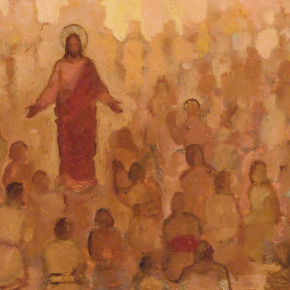 Richards’ work has been heavily associated with the LDS community, garnering attention by publication in official venues, such as LDS church magazines and the church-owned Deseret Books, as well as by strong private and public LDS patronage, including the Church History Museum. Existing as it does in a relatively conservative community, so-called “LDS art” might mistakenly be lumped into one catchall aesthetic of literal representation and strict ideology. But artists like Richards help to push the aesthetic possibilities of the genre by experimenting in new directions. Not only are his more traditional canvases breathtakingly impressive, but his breadth of range invites responses that can be surprising and startling.

Richards’ early work was characterized by his attention to accurate rendering, as in works like “Cherubim and the Flaming Sword,” from 2000, and his association with the emotive possibilities of dramatic lighting known as tenebrism. The artist’s 2003 “Son of Man” is illustrative of the latter, using bold tone to illuminate the piece, an approach resonant of Rembrandt, taking advantage of realism to capture the true physicality that is seen and felt.  Highly emotive, the piece reaches to the sensibilities of any viewer with a capacity to think andfeel. The warm tones, handsome face, and spiritual glow are recognizable within a long tradition of religious painting.

A decade later, at UMOCA’s Utah Biennial in 2013, Richards introduced his “Cristo” series to a broad, largely secular audience. On the length of a long wall, Richards’ displayed dozens of mostly small paintings in which the head of Christ was reduced to the most basic elements. In previous depictions of Christ, the artist might have imbued the features of the subject with a hazy glow and built up the surfaces with thick textures, but he was nevertheless working in a realist manner; but in this series of small pieces Richards paid almost no attention to defining features like eyes, ears, mouth or nose, rendering the icon-like images as textural experiments in which the subject was merely suggested by the long hair and beard. The “Cristo” series was a giant leap forward from his “Son of Man,” as Richards used, to great benefit, the principles of abstraction to allow personal connectivity with the image, vague and obscure but truthful, accessible as visual experience to both a lay and a Christian audience.

When Richards began painting these now-iconic images of the face of Christ, abstracted to allow for more meaningful, less literal, and thus more personal connectivity with the subject, it is reasonable to assume he experienced some internal conflict, considering how these paintings would be received by his conservative LDS patronage. Says Richards: “There was indeed a conflict in me as I began this series, and that was, to what degree might I abstract images of Jesus? Would I be considered a fraud as an artist for not pushing these images to a detailed finish? And what would my audience think about these depictions with blown-out features?”

In the works presented at the reception in his Woodland Hills home, Richards revisits a highly charged symbolic approach to his canvas through symbolism and innovation of painterly qualities. The balance of subjects is impressive and the lexicon of visual experimentation is tantalizing and remarkable.  There are biblical narratives in the grand manner: powerful, forceful, meek; more intimate, symbolic canvases that are refreshingly understood through painterly devices that are lucid, monumental, sculpture; and even installation.

Among the immense portrait canvases hung, was the reticent yet resonant “Crown of Thorns (Blue),” a small work reminiscent of the Cristo series. The common denominator of all these new works lies in a lusher and expressive composition with charged color and aggressive and abstracted brush strokes, minimal in quality and content, that imply and do not dictate. They are comparable in composition, subject and form, to Georges Rouault, from over a century ago, who did not intend his works exclusively for a religious audience, yet was able to make them, with great pathos, Christian.

One of the more striking of Richards’ recent works is “Wonderful Counselor.” Christ, painted in red, is placed just off-center to the left and surrounded by those who followed him; they are not in a position of passive reverence but actively engaged in the discourse of the sermon. Regardless of the upright followers whose attention is focused on the sermon, the variation of color creating more density and individuality between each, is roused and caught in a moment of excitement, created by various hues of color-making for an engaging narrative that can come alive for both sacred and secular viewers.

For much of the century we call modernism, art shed itself of its content, focusing instead on issues of style, of texture and line, abstraction and composition. As an ever-changing and yet always progressing artist, Richards manages to incorporate the best aspects of a century of surface experimentation, with classic forms that reach back for more than a millennium. Thus, the same art can be enjoyed for its own sake by a secular viewer or a spiritual one and that is why Richards’ work not only wins merit from an LDS audience, but captivates the attention and interest of an audience that transcends boundaries. 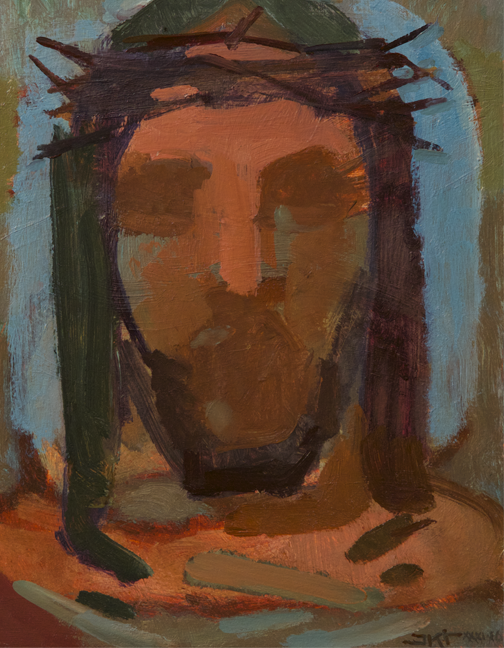