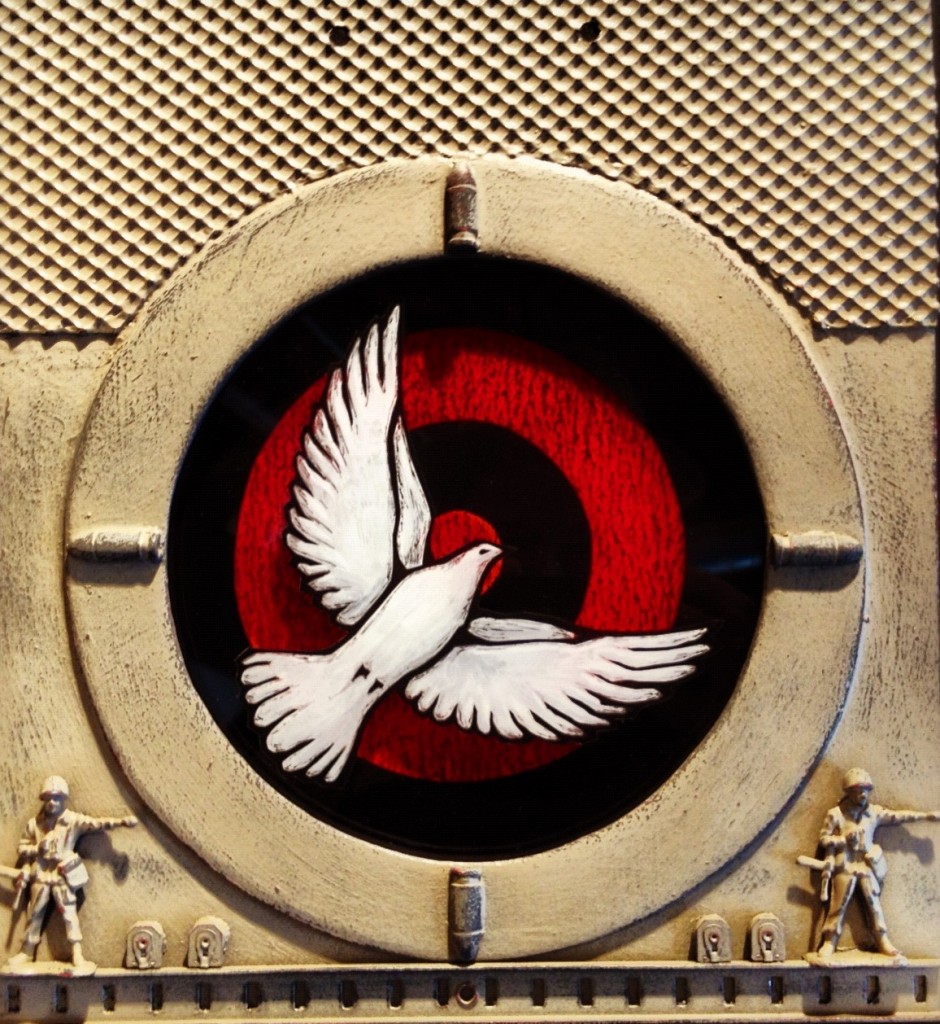 At Kayo in November, two eternal, contrary trends in art occupy opposing walls in what has become Shilo Jackson’s signature exhibition style. On one side, Ryan Harrington’s exquisitely crafted assemblages exemplify the Contemporary mode: each broadside makes a philosophical statement: here they comment on the universal, counterintuitive resort to organized, industrial violence in the pursuit of peaceful coexistence. Contemporary art is characterized by rhetorical aesthetics, and rhetoric provides the key to the necessary exercise of decoding the work. In ‘Contra-diction,’ a dove flies in front of a target, thus becoming a clay pigeon. The piece gains from its architectural feel, which underscores the institutional nature of organized violence. What makes it feel like a building is that is is built from a discarded clock, which also invokes the crucial element of time passing. Each such construction requires a moment to puzzle out and approve, after which the viewer is presumably in sync with the gallery public’s sentiments. 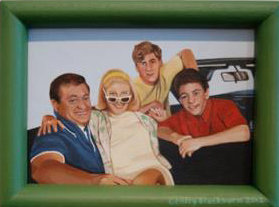 On the other wall, Gentry Blackburn’s miniature paintings take viewers on a journey in the other direction, from the public experience of celebrity, with its power to fossilize the significance of our shared cultural heroes, towards intimate, personal discoveries of quiet spaces where values that have escaped debasement still survive. In “The Arnolds,” four humans who happen to be actors cluster together, their smiles a paradoxical, shared defense against invasion by the leveling gaze of the TV lens. In “Pure Magic,” the basketball star emerges like the stalk of a century plant from a shrublike knot of fans, recalling one of those twin towers that also, eventually, fell, and grins a direct connection with the viewer. In a surprising masterpiece, “Bronson On the Line,” Charles Bronson, the man inside one of the more remarkable (and controversial) 20th-century careers, looks out at us—once again, eye contact is key here—and we encounter again, as if for the first time, the eloquent dignity that fame and the vicissitudes of career finally obscured.

We see far more art in photographs than we do in person, but the first-person encounter remains vital, and here are two examples. The flawless craft of Ryan Harrington, only really measurable in person, gives his constructions an impersonal, even threatening feel at odds with human comfort, carried out through his primary colors and generous use of black. Gentry Blackburn’s paint technique stops just short of the photographic, keeping the feel—the caress, if you will—of a human hand in their making, in place of a machine reproduction. She leavens this further through her palette, which includes backgrounds replaced by bright, custom-mixed colors that definitely do not come straight from the tubes. Attentively mounted in custom-made frames and prominently hand signed, their every quality evokes a warm, decidedly un-ironic emotional attachment. Harrington’s massive (regardless of size) sculptures require displaying like monuments; Blackburn’s intimate paintings ask to be surrounded by other personal treasures, where they promise to go on for many years, dependably revitalizing the owner’s sense of true, even secret, identity.