Ruth Ann Garner and Valerie Hollstein at One World Gifts

This month beautiful and inspired glass artwork is on exhibition at One World Gifts and Gallery in Sugarhouse. The two exhibiting artists came to this medium as adults with grown children and  neither had formal training in it. 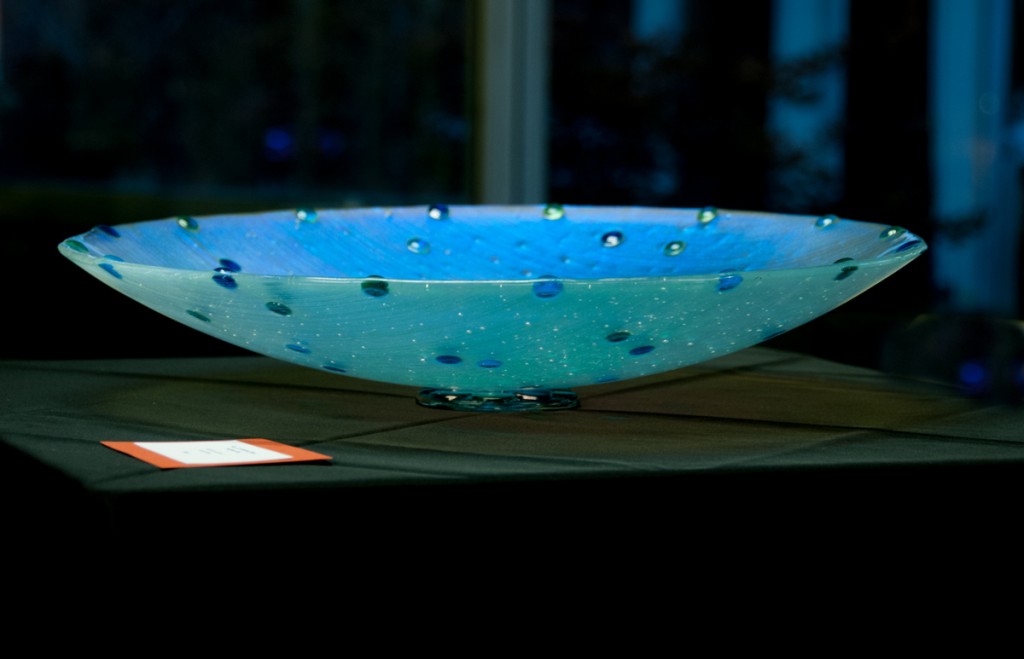 Ruth Ann Garner took art classes in high school, but her careers in technology and in raising a family took precedence for many years. “I had just come back from San Francisco [she had seen glass art there] and wondered how it was done and whether I could do it, too,” she says of tackling this new medium. That was three years ago.  She credits her training as a computer scientist with helping her. “I think glass fusing is helped by using a disciplined, almost scientific approach.”

Garner started reading about glass art and researching the web, and decided to try the medium on her own. Melted glass bottles were popular then, so she started there. “It was a good thing to start with because it was relatively easy and the materials were inexpensive. It was a good way to learn how to use a kiln. I told my book club that I needed glass bottles; within a month I had a garage full of them.” She soon joined the Glass Art Guild of Utah (GAGU) where members were generous in showing her techniques and short-cuts. After experimenting and perfecting her techniques for the first couple of years she got a larger kiln which allows her to create bigger pieces and to fuse more pieces in one session. 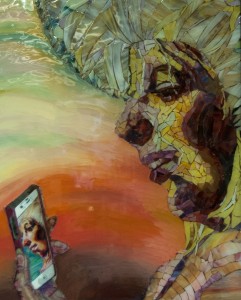 Valerie Hollstein  did “… lots of crafty things…” with her best friend in her youth. As an adult she created images with  glass to put in the children’s rooms “…. animals and such. After that I just dropped it all. Then when they were raised I had sort of a mid-life crisis …. who am I, what is my purpose, you know, the usual stuff … so I went back to school and combined anthropology and fine art.”  University of Utah’s John Erickson was her main teacher and she regards him as a great and patient man who gave her  drawing and painting skills. “I learned drawing and painting, but when I finished, I went right  back to glass.”

Hollstein’s favorite piece in the show features an image of a cowboy. “I don’t know – he’s just a happy guy. It’s  more spontaneous than the others. It’s not all glass fragments – for example one side of his face is the painted background. I wanted to see if I could exactly match what I painted to the glass parts of the image.” She starts any given piece with a painted background and then builds in her clear glass fragments, fitting them to what she painted. “Sometimes you start with a certain image in mind, but as you go along, it becomes something entirely different.” If she thinks it’s not working she’ll take off the fragments and repaint, then add the glass again. Sometimes she looks at what she has started, sees something else in it, and makes an entirely different piece. “You know, how when you begin a painting suddenly one painting becomes ten paintings.” 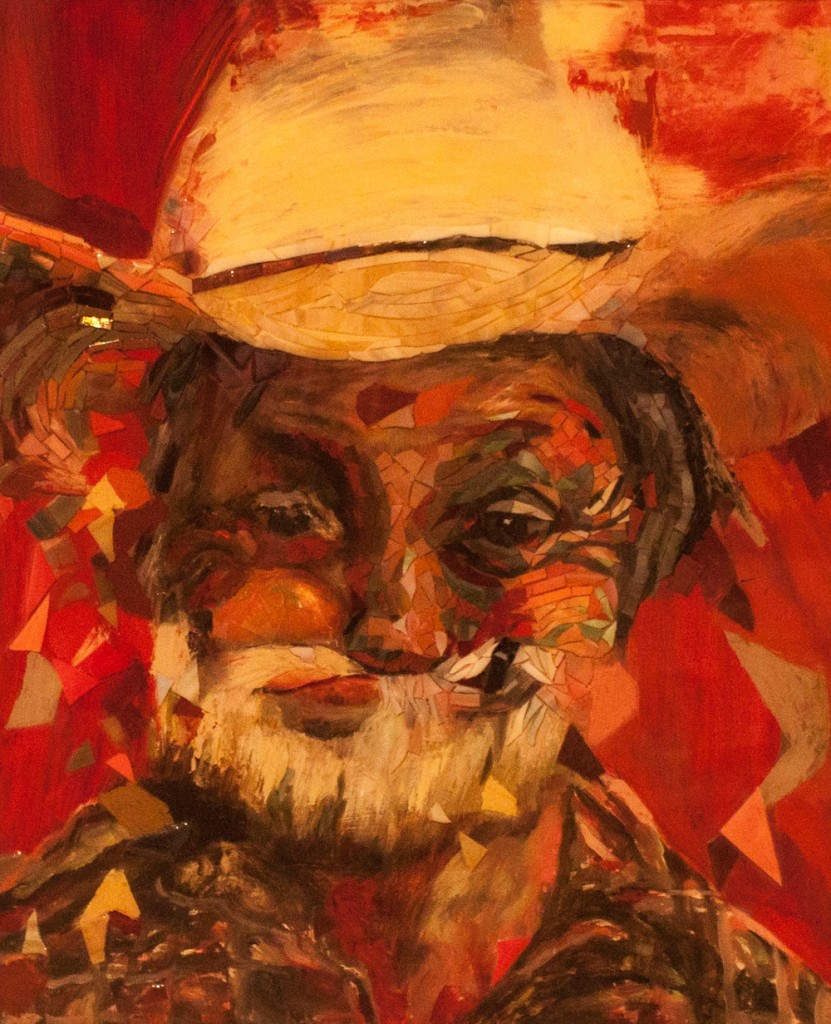 Ruth Ann Garner favors “Wheel of Seasons.” Each segment, divided by a representation of either equinox or solstice, is one of the four seasons, and the images around the circle show the growth cycle of grapes. It is a personal piece to Garner. “I enjoy watching the passage of time and the seasons changing. We are lucky enough to have a  home vineyard which I use for inspiration. I am also interested in watching the stars and constellations change with the seasons. I really enjoyed the ‘building up’ process – fusing the ‘wheel’ then adding a piece to it, fusing  again, etc.” 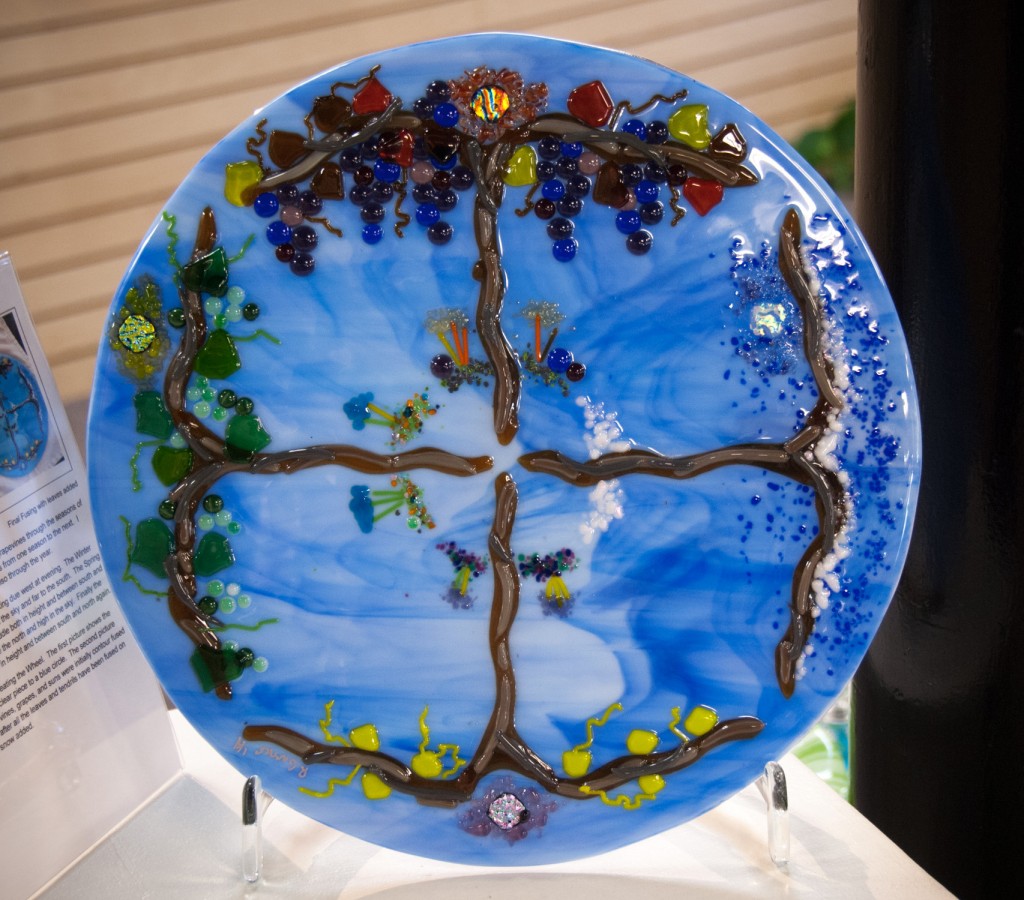 Both artists will be present on Gallery Stroll night (September 19th) with Garner  teaching glass jewelry-making during the event.

The exhibit continues through September 30 at One World Gifts, 2166S 1100E in Salt Lake City.