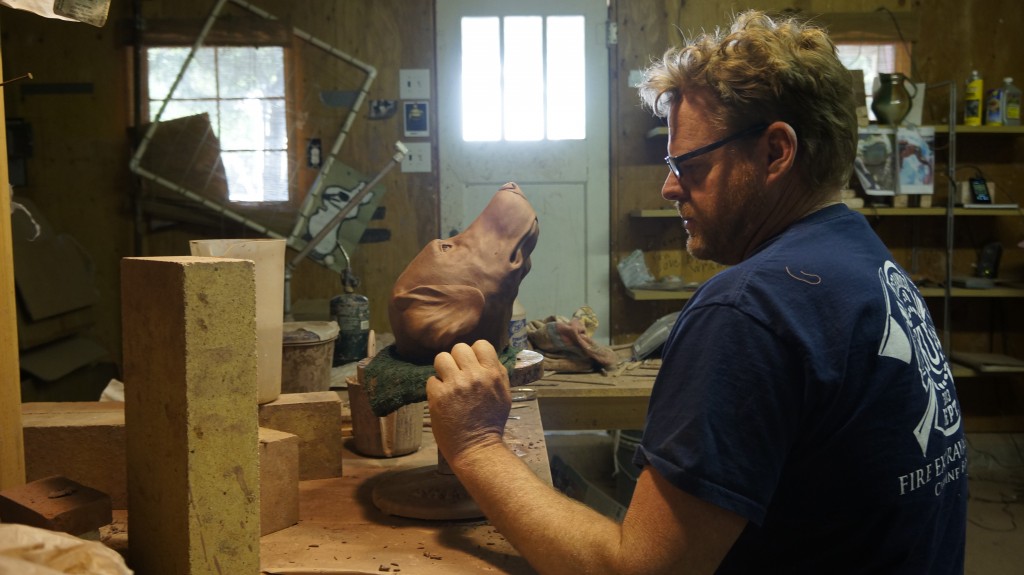 Growing up in a blue-collar family on the rural outskirts of Palm Springs, Calif., Russell Wrankle never imagined that one day his life would revolve around the arts. That all changed in college, when he took a ceramics class and was instantly hooked. “I guess it was something that I always had but never explored,” he says.

A BFA and MFA in ceramics and hundreds of awards, solo exhibitions, residencies, lectures, invitationals, and juried shows later, Wrankle has built a considerable reputation for himself as an artist and art educator.

His studio is a restored barn in Toquerville, where he’s lived with his wife, an elementary-school art teacher, and their three kids since 2001. His first selling works were pottery, which brought in business but didn’t fulfill him creatively the way sculpture could. He eventually made the choice to devote his time and energy to the latter.

Wrankle focuses largely on animal imagery, a connection that traces back to a pre-Columbian art history class he took in grad school, where he discovered the Colima dogs of Mexico. He then began studying animal-centric works from around the world.  “I like to use animals to make a visual narrative of the human condition—the way that Aesop’s Fables did, to explore human personalities and types,” he says. “So all my work is about the human condition, primarily using the animal as a starting point in that conversation. They have a lot to say.”

Wrankle says he’s fascinated by exploration of the external and internal structure of the animal form, and their fleshiness. He pays close attention to how the skin might hang over bone and muscle.

He will incorporate mixed media if an idea calls for it, but remains faithful to his first love, ceramics. “I like the fluidity of it during the workable phase,” he says. “I like how it can be fired and become solid, and how it can mimic other materials. I enjoy the process that’s involved: I start with solid clay on an armature, rough out the form until I find it, hollow it out, and put in the details.” 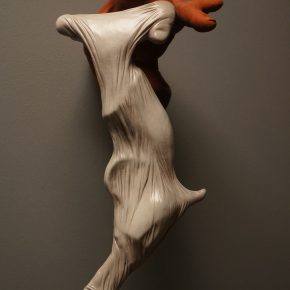 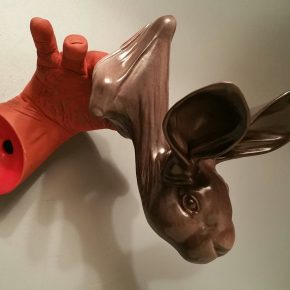 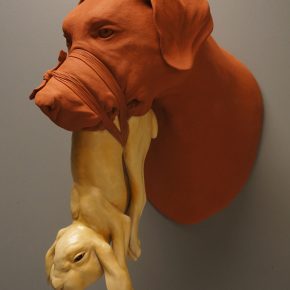 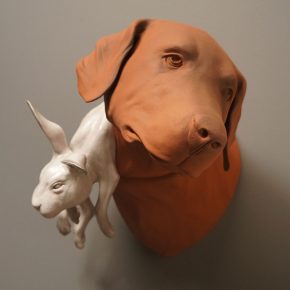 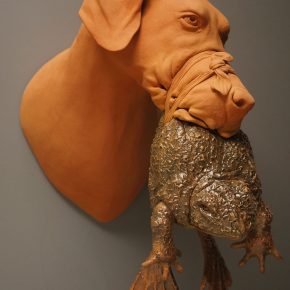 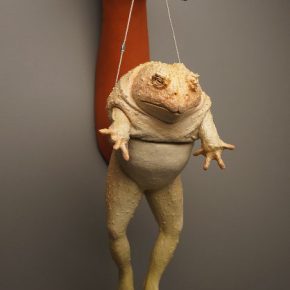 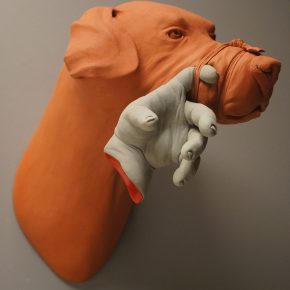 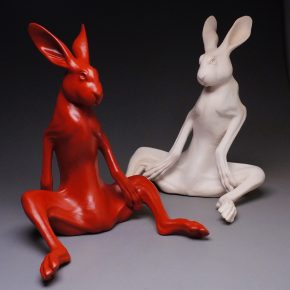 Wrankle typically works in series and just finished a collection of seven dogs, startlingly lifelike figures in various poses of either aggression or submission with other animals. Many of his pieces touch upon the macabre, depicting nature at its most plainly honest and brutal.

“Hold It,” from Wrankle’s dog series, joins Shawn Ekker’s favorite pieces by Utah artists like Richard Hardin, Jimmie Jones, Brad Holt, and Kate Starling in a collection that the Cedar City-based designer and home builder has amassed over the past 20 years. Ekker was introduced to Wrankle’s work through a mutual friend and also has purchased several of his smaller pieces. “He’s a world-class artist. For him to be in our community and do the art that he does, it’s pretty bold because I think that there’s a lot of psychoanalysis that could go into his pieces,” Ekker says. “It’s not for everyone, and it’s bold of him to do whatever is on his mind. I think that’s important.”

Wrankle produces an average of one or two complete works each month; he estimates that there are about 200 pieces in his entire portfolio. “I’m finding that I have to live with stuff for a while to find out what can keep a heartbeat,” he says. “I pull them out of the kiln and I’m excited about them and I live with them for a month or two, or however long it takes, and some of them get better, most stay the same, and some die on the vine. I’d say about one in eight are great pieces.”

His prior series, which focused on rabbits, was well received; he sold every one. “Then I got to the point where I was just making them to sell and there were no more questions for me, so I stopped making them,” he says. “I lost a couple galleries as a result, but that’s fine. I’m more interested in artistic integrity than making money.”

Throughout his career, Wrankle has represented himself with that same candor and rebellious edge, refusing to weigh profit above purpose or be swayed by trends.

Getting more attention from museums as of late has been gratifying; that’s where he feels his work really belongs. He contends that galleries are driven by profit, whereas museums are idea-motivated. 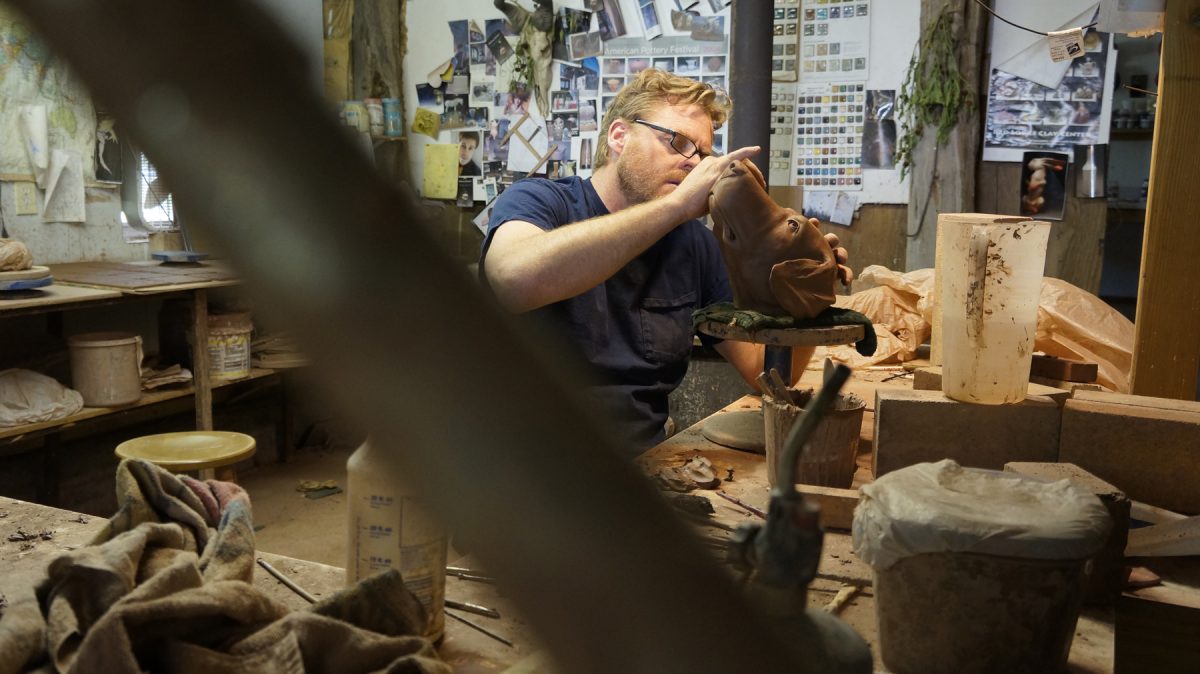 Wrankle joined the adjunct art faculty of Southern Utah University for the 2011-12 school year with plans to build his teaching portfolio and apply for jobs out of state, until a full-time assistant professor position opened up. He now teaches ceramics and sculpture with a focus on animal and human heads, mixed media, and 3D foundations. “My studio practice is one creative exploration, but teaching is another. Just the relationships that develop over time with students and seeing their growth and seeing the light turn on when they find their own voice and go down their own path, with a slight nudge from me, is very rewarding,” he says. “I get as much out of the students as I give.”

One of Wrankle’s students is going into an MFA program this fall, while another has gained a prestigious apprenticeship with Jun Kaneko in Omaha, Neb. Wrankle’s happy to share his connections with students, especially those who are willing to work hard and put themselves out there. He’s also realistic with them about the difficulty of making a name and a living as a professional artist. “There are a lot of low points in the art business. It’s a rollercoaster ride for sure,” he says. “Recently, I applied to be a presenter at a national symposium and didn’t get it, but the same day, two galleries asked me to exhibit with them. I tell my students that for every ‘yes,’ you have to live with a hundred ‘no’s.’”

Other sage advice for art majors? “Work your ass off,” he says. “Make what you believe in and try not to follow trends. Let the marketplace come to you. Oh, and work your ass off.”

Wrankle says he doesn’t feel that he has reached the pinnacle of his own career yet. In fact, at age 51, he’s more prolific than ever before. “I’ve picked up the pace,” he says. “I hear stories of people who begin a teaching career and they stop making work, and I don’t want to be that guy. Every once in a while I’ll be unenthused, but I always have ideas. I have more ideas than I’ll make in my lifetime.”

He doesn’t believe in artist’s block. Wrankle says that when he’s struggling to create a new piece, he goes into the studio anyway and just starts moving material around.
“When your hands are activated, it activates the mind,” he says. “Even if you don’t have an idea, my recommendation is to put that first line on your paper or put that first dab of paint on your brush, and an idea will come. I’m speaking for myself, but I think that people who have artist’s block just aren’t getting to work.”

His current project is a collection of masks that came to fruition through his 3D class. He made them to demonstrate the additive and subtractive process of sculpting. He’s able to produce them at a much faster rate—sometimes two or three per day—to keep ideas flowing. The masks represent his first foray into human-inspired faces.

Wrankle says that teaching has energized and inspired his work. He’ll introduce a media, idea, or artist in class, then return to the studio to explore how those topics and techniques might be implemented in future pieces.

Marionettes have recently piqued his interest, enough to make puppetry the focus of his mixed-media class for the upcoming spring semester. Wrankle says he’s been dabbling in the art form and has recruited an expert puppeteer from Ohio to assist with the course. “He’s really blossomed as a teacher, and he’s got some really nice ways of pulling good work out of the students and helping them challenge themselves in ways that will lead to their success,” SUU art Professor Susan Harris says. “I go to his class critiques and he comes to mine so there’s more dialogue about the students’ work, and it’s been terribly enriching. We don’t even always agree but it’s good for them to see that, because that’s important in art.”

Wrankle’s work has been shown at Colorado’s Arvada Center and the Hunterdon Art Museum in New Jersey so far in 2015. The dog series will be displayed during the “Go Figure” group show at Portland’s Eutectic Gallery from August 7 through September 26, and at an upcoming curated show in the Midwest. “I’m actually getting to the point where I can’t keep up and I’m going to have to start saying ‘no’ a little more,” he says. “I would love to be in everything, but my making process is pretty slow and I’m almost not able to meet all the deadlines. I guess it’s a good problem to have.”

Wrankle also sells his work through his website, russellwrankle.com, though most of the sculptures are presently spoken for. He doesn’t take commissions. “I’m not interested in making other people’s ideas,” he says. “I’m a lot more interested in my own voice and artistic narrative.”

“His art is honest above all, unapologetically honest,” says Ekker. “He will reach into his mind, into the deepest part, and bring out these pieces of art. It’s not a glimpse into what’s popular right now. It’s a glimpse into Russell himself.” 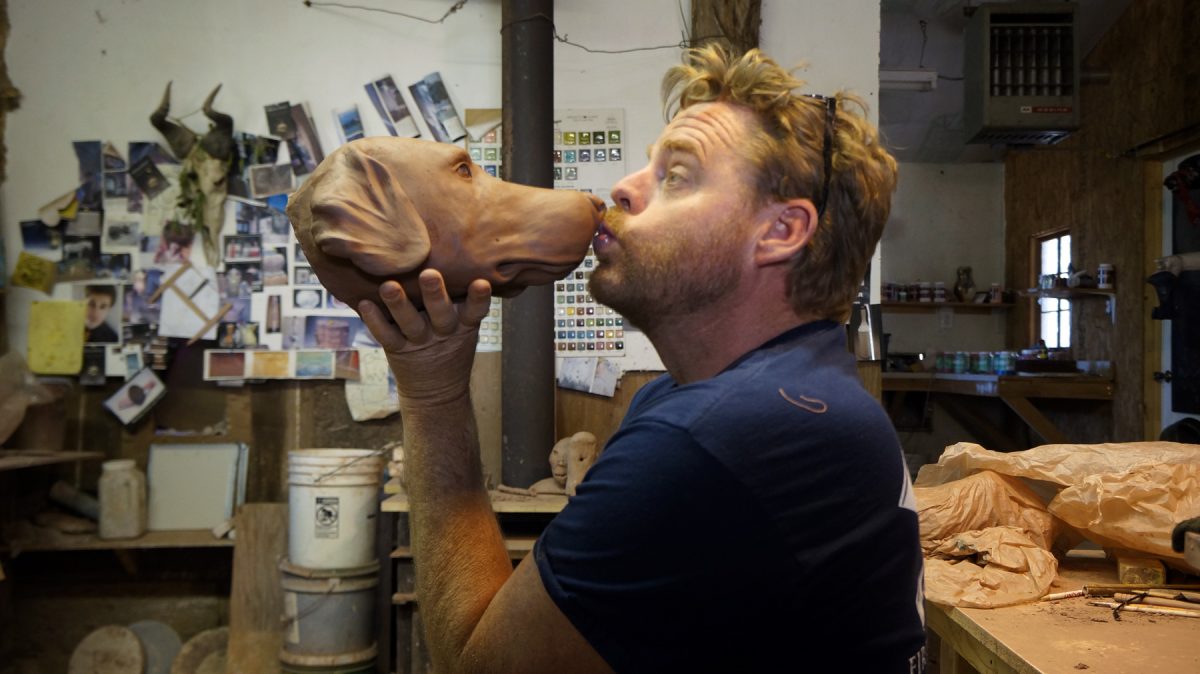