In 2013, Ruby Chacon was selected by 200 of her peers as one of “Utah’s 15 most influential artists.” The following profile appeared in Utah’s 15: The State’s Most Influential Artists, published by Artists of Utah in 2014. 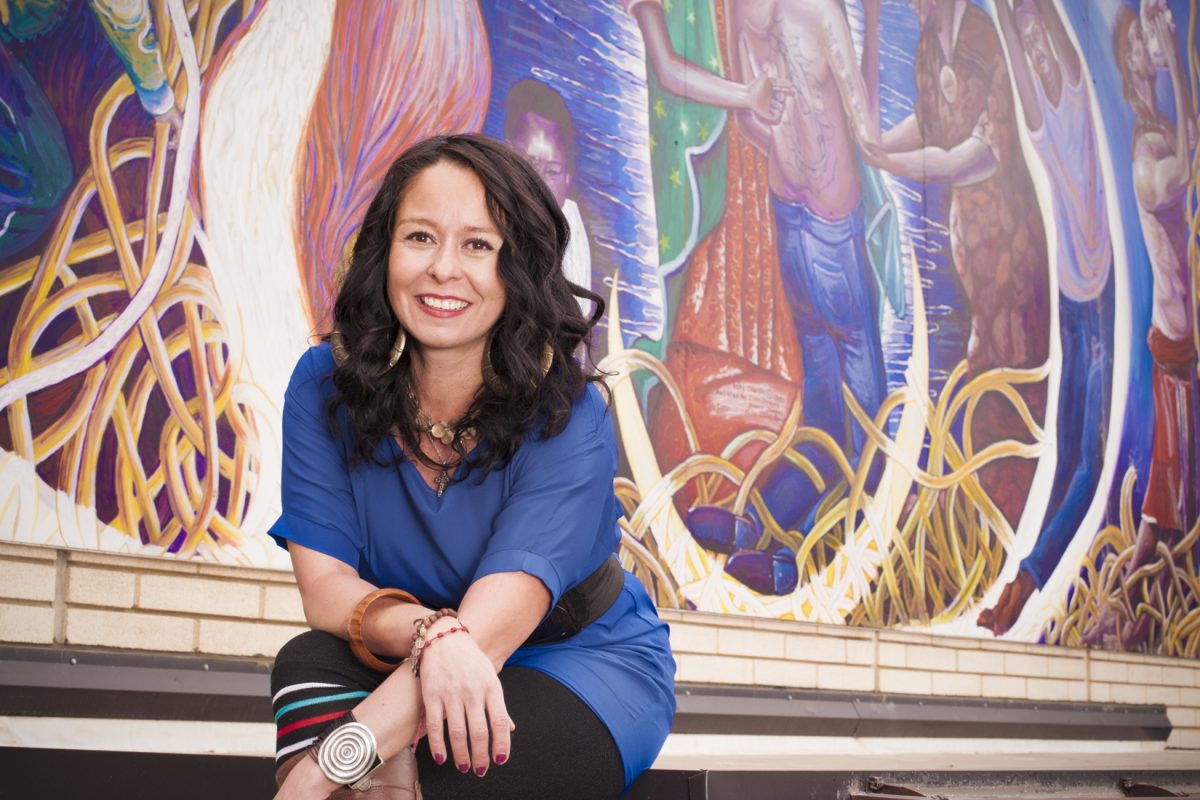 Ruby Chacón, visual artist, writer, community organizer, and co-founder of Mestizo Institute of Culture and Art (MICA), is, in addition to everything else, a storyteller. She tells the story of Peoples of Utah – her people – who were here centuries before the Mormon pioneers. That time when the American West was part of Mexico is a story too often left out of history books.

Even though she has been in Utah all her life, Chacón feels what it is like to be different; to come from a family that speaks a different language and celebrates different traditions. Perhaps that’s why she is drawn to the immigrant community on the west side of town. That is where she co-founded Mestizo, a place where Latinos and other immigrants can meet, share stories, learn to be community activists, and deal with the complexities of living and working in a different culture. In a sense, she’s like a choral director who brings a lot of different voices together, finding harmony in their distinctly different stories, giving them a voice and a platform to share their stories and be heard.

Chacón was the first in her family to graduate high school. Then she earned a fine arts degree from the University of Utah. She has served on numerous boards and committees, including the Salt Lake County Arts Acquisition Committee, Spy Hop, and Salt Lake City Public Library. In 2007, she was awarded the Salt Lake City Mayor’s Award for Visual Arts. And there have been many more honors and awards for her art and community service. In short, she has come a long way up the path from her ancestors who planted corn seed in northern New Mexico and scribbled stories on cliff walls for future generations.

Much of her art, whether gallery paintings or murals, fills the gaps in the history books with visual stories of family traditions, struggles, and survival. Chacón states that she wants to make sure that “the children of those who come in search of opportunity do not have to feel ashamed for their families’ struggle for survival, but can embrace their ability to persevere. They can embrace their ability to rejoice, create, overcome and succeed, knowing that the seeds of success lie in their own ancestral heritage.”

As a storyteller and artist, it’s no wonder Chacón is drawn to the human figure as subject matter. Chacón paints her heritage and the people who are part of her world today – friends, family, public figures, and herself. Her work is characterized by bright colors and pattern. At times it feels like a cross between Georges Seurat and Chuck Close. You have seen her work on murals around town: Horizonte, 1300 South Main; 500 North and 600 West; Northwest Multipurpose Center; Catholic Community Services, 200 South 745 East, just to name a few. Her paintings have been in solo and group shows at the Salt Lake City Airport, University of Utah Medical Center, Westminster College, Kimball Art Center in Park City, Art Access Gallery, and many others outside Utah and abroad.

With the help of other artists and apprentices, she most recently created a public art installation at the new TRAX station at 650 W. North Temple. It’s a true community collaboration derived from surveys and interviews with residents about how to best represent their sense of community through visual images, symbols, and poetry.

Chacón tells stories in words as well as pictures; beautiful stories, honoring the past and celebrating the present; painful stories in their raw honesty. She tells the story of her son, Orion: her surprise pregnancy at the age of 20, of living with her younger sister while her sister’s husband was in prison, and of Orion’s music, from singing “Twinkle, Twinkle, Little Star” before he could talk in full sentences, to his musical performances as a young man today. “I try to be as honest as I can in my work (whether through writing or painting) in order to express the essence of humanity,” she says. “I encouraged my son to do the same growing up. I feel like this serves two things: healing, and an honest piece of work.”

Chacón’s passion for working with youth has made her a valuable partner and collaborator for many different programs. In her work with youth – at Mestizo, Bad Dog Rediscovers America, and other programs – she tries to create a safe place where people feel comfortable sharing as much as they want. “A space of belonging and a safe space is the foundation for the ability to do this important work,” says Chacón. “Not everyone is ready to share personal things about themselves and that is also OK. Being vulnerable takes a lot of trust. I do it as an artist because it heals my soul and makes my work more real. I feel when I explore myself, I learn about humanity in general. In the end, we are all one.”

Debbie Rocha, currently assistant program director for Juvenile Justice Salt Lake Early Intervention Services, recalls inviting Chacón to speak to the girls at the Female Observation and Assessment Unit. “Her presentation and discussion with our girls, ranging from 13 to 17 years of age, made a great impact on them. They were able to relate to her stories and were inspired by her success and artwork. I also had her come and speak to the youth at Salt Lake Early Intervention. Both males and females, as well as staff, were impressed and energized by her artwork and how she became an artist.”

Rocha also served on the board of the nonprofit Mestizo Institute of Culture & Arts (MICA), which Chacón co-founded. “It was through this organization that I saw Ruby really reach out to the youth and provide them opportunities to work on art projects with her that would be displayed in the community,” says Rocha. “By providing these opportunities to the youth, it empowered them to stay in school and further their education.” Out of MICA, Mestizo Arts & Activism (MAA), a partnership with the University of Utah, was formed. Through this program, the University connects with the community and youth receive mentoring.

Maria Garciaz, Executive Director of NeighborWorks Salt Lake, has also drawn on Chacón’s expertise and passion for youth programs. “Ruby lived in the neighborhood and I was familiar with her work,” says Garciaz. “I invited her to serve as lead artist to work with neighborhood youth to design a mural for a store on 600 West and 500 North. Subsequently, she became involved in several additional mural projects and served as an instructor for our YouthWorks Arts program.” This led to Chacón working with more than 30 youths on other art projects, including the mural near the Northwest Recreation Center playground. Garciaz notes that Chacón “made sure youth from various schools and areas of Salt Lake were engaged; it was not restricted to one school or one part of the city.”

Despite her deep roots in Utah, Chacón felt she needed to get away, at least for a while. “Last year, I got divorced, lost my home and my friend, Matt. I needed to get away and heal,” she says. That opportunity came in late 2012 when a friend invited her to stay with her in Morocco and paint a mural on her ceiling. “It’s the best decision I have made,” says Chacón. She recalls something her mentor, artist Lorraine Garcia Nakata, told her:

“Imagine yourself as a drop of pigment, and a bucket of water as your community. If you are taking care of your center, that pigment is stronger, and when you drop it into the bucket of clear water, it reaches out brightly and has greater impact.”

Chacón knew she needed to heal her center. “Little did I know that years of neglect would bring out so much inside of me. I started grieving over the death of my sister and brother. My nephew, sister and brother all died between September 28 and October 13 (different years), so when October came last year I couldn’t keep up with the loss I felt inside.” In November, she bought her ticket to Morocco.

Chacón’s absence may be a loss for Utah now. But when she returns, whether for a visit or to stay, she will bring her restored spirit, her brighter pigment. At the same time, Morocco has found a place in her heart. “I will probably always come back to Morocco,” she says, “as it is the place that gave myself back. It has a spiritual power that cannot be explained.” 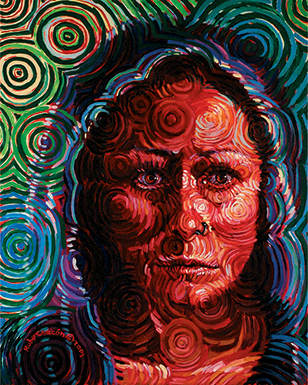 While in Morocco, in addition to the commission that took her there, she is painting and researching gallery representation. It’s not so easy to do, being a foreigner, but “a studio visit with a gallery in Casablanca is being arranged,” she says. She is also applying for public art jobs back in the United States, including Utah. “Where will I live? I don’t know,” she says. “I’m a gypsy for now” – a gypsy learning about humanity “from the inside out.”