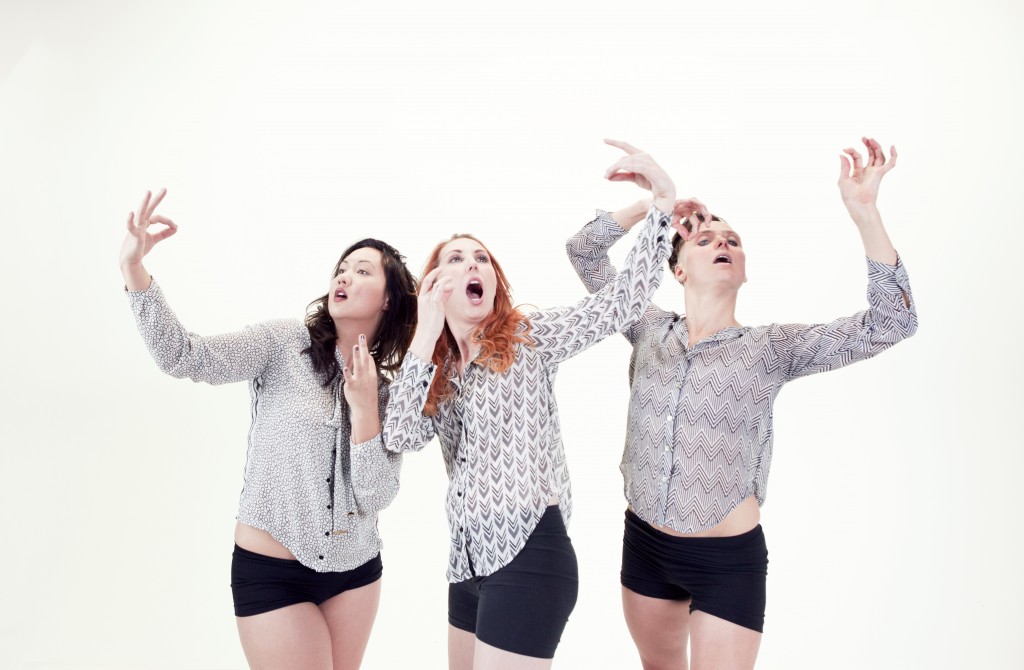 In Fall 2013, loveDANCEmore published a performance text by Rosie Trump, a Nevada- based choreographer. Since that time, the text has become fully realized as a performance, Fill in the Blank, to be presented at Sugar Space this month.

When asked to describe the performance text in context, Trump says the idea was to have a text that could function as a reading or as instructions for making a dance. After seeing the essay in publication, Trump says she “knew I had to make the dance myself, as well. I wanted the essay to be read and recorded and that that would be the sound score [read by Reno-based artist Dana Miller] for the dance. The viewer gets to both see and hear the dancers receiving the choreographic score as it’s happening. This creates a layering effect and gives the audience insider information of what will happen right before it happens.”

Trump knew she wanted to bring the work to Salt Lake City because of the thriving dance scene here that contrasts to the more isolated town of Reno where she’s working. While the work seeks to share the social and political pressures facing women at large, audiences can also look for nods to a more specific lineage of entertainment in the West (think showgirls).

28,000 years ago artistic achievements of the Gravettian period include the Venus figurines, statuettes of nude female figures with exaggerated abdomens, hips, breasts, thighs and vulvas.

2,800 years ago the first record of a solar eclipse, caused when the Sun and the Moon are in conjunction as seen from Earth, is made in China.

The moon has been cycling around the Earth for 4.527 billion years. When you divide the year up by Moons, you get 13 moons of 28 days each, plus one extra day.

CYCLE OF LIFE
Choreographic directive: List everything you have ever and will ever want.

The average menstrual cycle is 28 days long. A woman will spend approximately 2,800 days menstruating during her lifetime.

The fastest sperm will travel from the penis to a fallopian tube in 28 minutes. 28 days after conception the amniotic sac is forming and the fetus is smaller than a grain of rice. 28 weeks after conception fetus is 10 inches long, weighs 2 pounds and can open its eyes. In medical terminology, newborn refers to an infant in the first 28 days after birth.

AGE IS JUST A NUMBER
Choreographic directive: Make a dance for the ideal age.

Martha Graham was studying at the Denishawn School. She performed one of Ted Shawn’s Egyptian dances in a short silent film that attempted to synchronize a dance routine on film with a live orchestra.

Trisha Brown choreographed Target and Rulegame 5 as a member of the Judson Dance Theater.

Monica Bill Barnes choreographed From My Mother’s Tongue and Home.

Rosie Herrera was commissioned by the American Dance Festival to create Dining Alone for its 2011 season.

28 years ago, PLAN, the Pro-Life Action Network, proclaimed “a year of pain and fear” for anyone seeking or providing abortion. During a PLAN event at a motel in Appleton, Wisconsin, held to celebrate a wave of abortion clinic bombings and arsons, the motel’s marquee read, “Welcome Pro-Life Activists—Have a Blast.”

In 1985, 28 years ago, violent acts against abortion clinics included 2 bombings and 8 arsons.

28 days passed from when Texas Senate Bill 5 was created to when the bill was passed with a 96–49 margin, sending the measure to the Texas Senate on July 10, 2013. The bill places restrictions on abortion rights and will lead to the closing of all but five abortion clinics in the state. This will make it virtually impossible for an incredibly high number of women to obtain an abortion.

The Marching Dance: The SlutWalk protest marches began on April 3, 2011, in Toronto, and quickly spread to the United States and globally. Participants protested against explaining or excusing rape by referring to any aspect of a woman’s appearance and called for an end to rape culture.

The Flip Flop Dance: On Jan. 31, 2012, Susan G. Komen for the Cure, the world’s largest network of breast cancer activists, stopped funding Planned Parenthood. In the 24 hours after the news broke, Planned Parenthood received more than $400,000 from 6,000 donors. Four days later, following a massive outcry by supporters, Komen’s Board of Directors reversed the decision.

The Vocal Dance : In response to Missouri Rep. Todd Akin’s comments on Aug.19, 2012 about the female body’s ability to “shut that whole thing down” in the event of “legitimate rape,” the Renegade Raging Grannies write and perform “Legitimate Rape,” a three-verse protest song. It received nearly 500,000 views after just four days on YouTube.

The Standing Dance: On June 25, 2013, State Sen. Wendy Davis held a 10-hour-long filibuster to block Senate Bill 5, legislation that would have created new abortion regulations in Texas. She took no bathroom breaks, wore tennis shoes and a back brace (to keep her from the prohibited activity of leaning on anything.)

The Throwing Dance: On July 12, 2013, the confiscation of feminine hygiene products by Texas Capitol police from attendees entering the Texas Senate gallery was coined ”tampon-gate.“ However, individuals with concealed carry licenses were permitted to bring their guns into the Senate gallery that day.

This article appeared in the May 2016 edition of 15 Bytes.