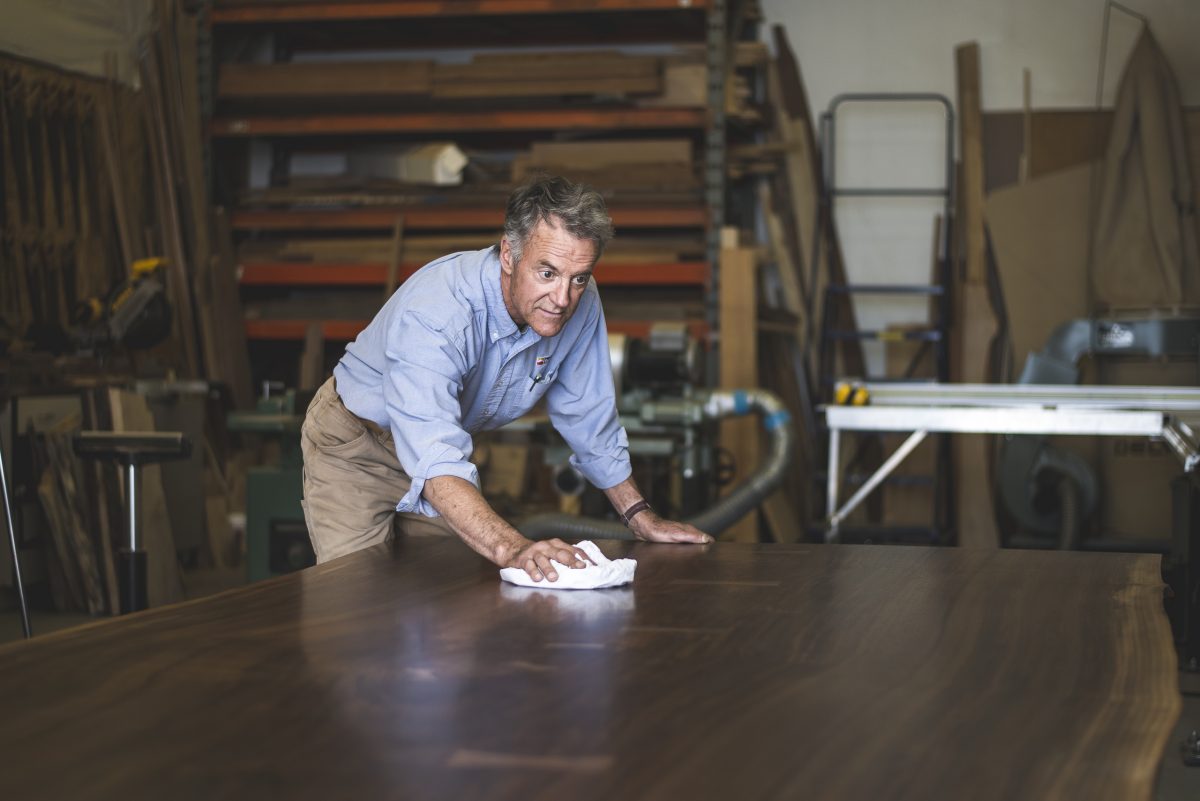 When historians scramble to find physical evidence for understanding a culture or period, they may consider utilitarian fine art as a harbinger of a new century, a reflection of a nation’s existential crisis, evidence of a major war, or proof of an economic recession; but, generally, crafts and decorative pieces are still treated as second-class creations compared to the “elevated” mediums of painting and sculpture. Because of this practice, we leave an important art history medium underutilized and understudied, somehow trusting painting as more than an object while dismissing a table as a feature of industrial design. Though perhaps we might not consider every handmade piece of furniture in the same vein as traditional fine art mediums established by the European academies, there is no denying that good furniture design comes with artistry, careful planning, and extreme precision. In fine woodworking, we can see the hand and heart of the artist as much as we do in any painting.

Ron Nolte is one such artist. A transplant to Utah, he came here after studying ceramics and anthropology at the University of California at Santa Barbara to continue his studies. He never finished his graduate work in ceramics — “I couldn’t ever quite figure out the leather hard and greenware stages in Utah,” he says. “In California, I could leave my pieces out and the next day they’d be perfect, ready to fire. Here, you leave it out and it dries too fast and cracks or the top is crumbly, or you wrap it and it gets crushed in the bag. It just didn’t seem to work.” — but he did stay, becoming interested in stained glass, construction, and carpentry. 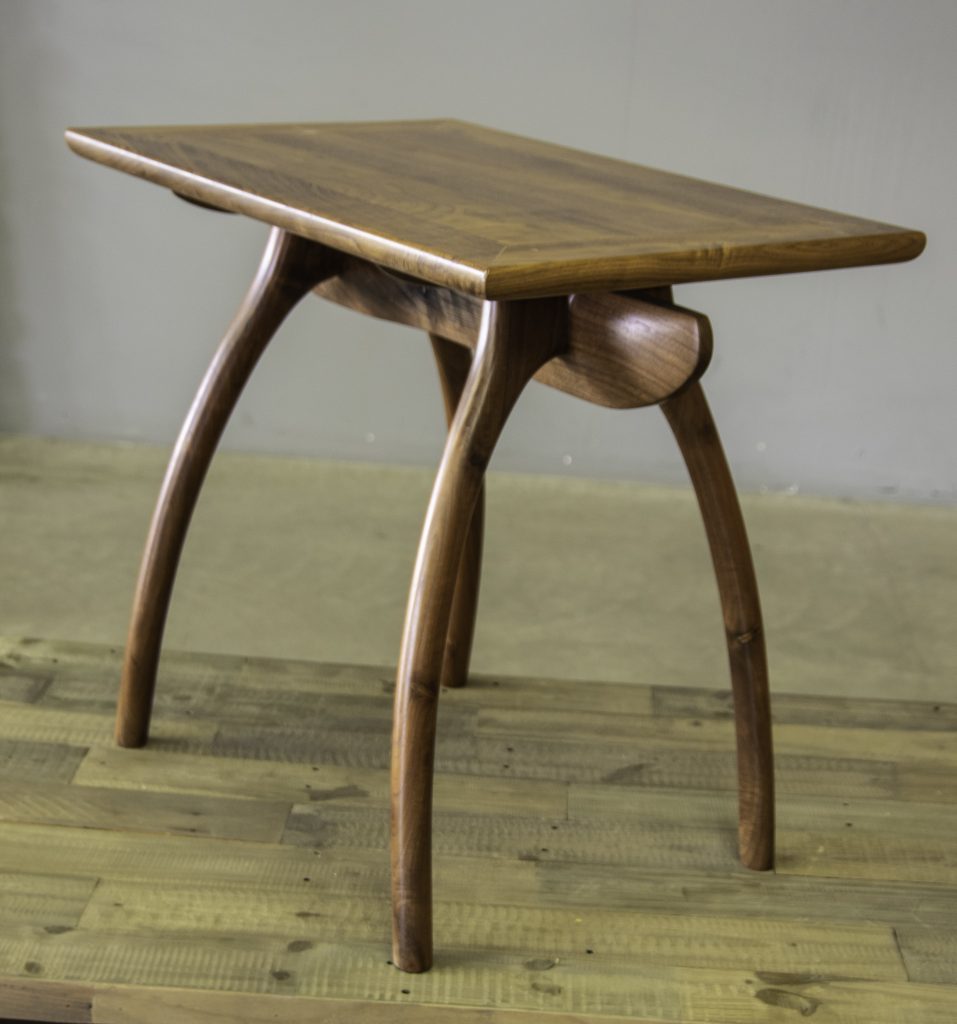 Nolte can best be described as a master craftsman. His understanding expands past the general understanding of woodworking and furniture making to a self-exploration of influences and experiences. Nolte’s work is particularly influenced by furniture from the Ming dynasty, which he was exposed to at an early age: a friend’s father had a collection of Ming dynasty furniture which created an interactive, museum-like atmosphere in their home, allowing Nolte to admire the furniture, but also to touch the objects and play with the drawers. He was struck by the flow of the Ming furniture, which is known for being both delicate and sturdy.

Like Ming dynasty furniture, Nolte’s work is primarily well-crafted and functional, with the added benefit of being incredibly balanced compositionally. In one of his pieces, created out of his workshop in Woods Cross, a small table is made out of vermillion padauk, a deep reddish- brown wood from Africa popular both for its rich color and for its stiffness and stability. The table is constructed with thin, arching legs and depends on two hidden dovetails for its sleek, scrolled top. When the scrolls are removed, neat slots appear where the dovetail would sit firmly in the tabletop. The table creates a pleasing curving shape, the legs creating a line to the tabletop, the scrolled decoration on either side of the table again pointing down into the legs. “I often focus on the flow of the piece,” Nolte explains. “Furniture can be clunky or boxy. Craftsmanship comes in building pieces that flow and feel unified.” 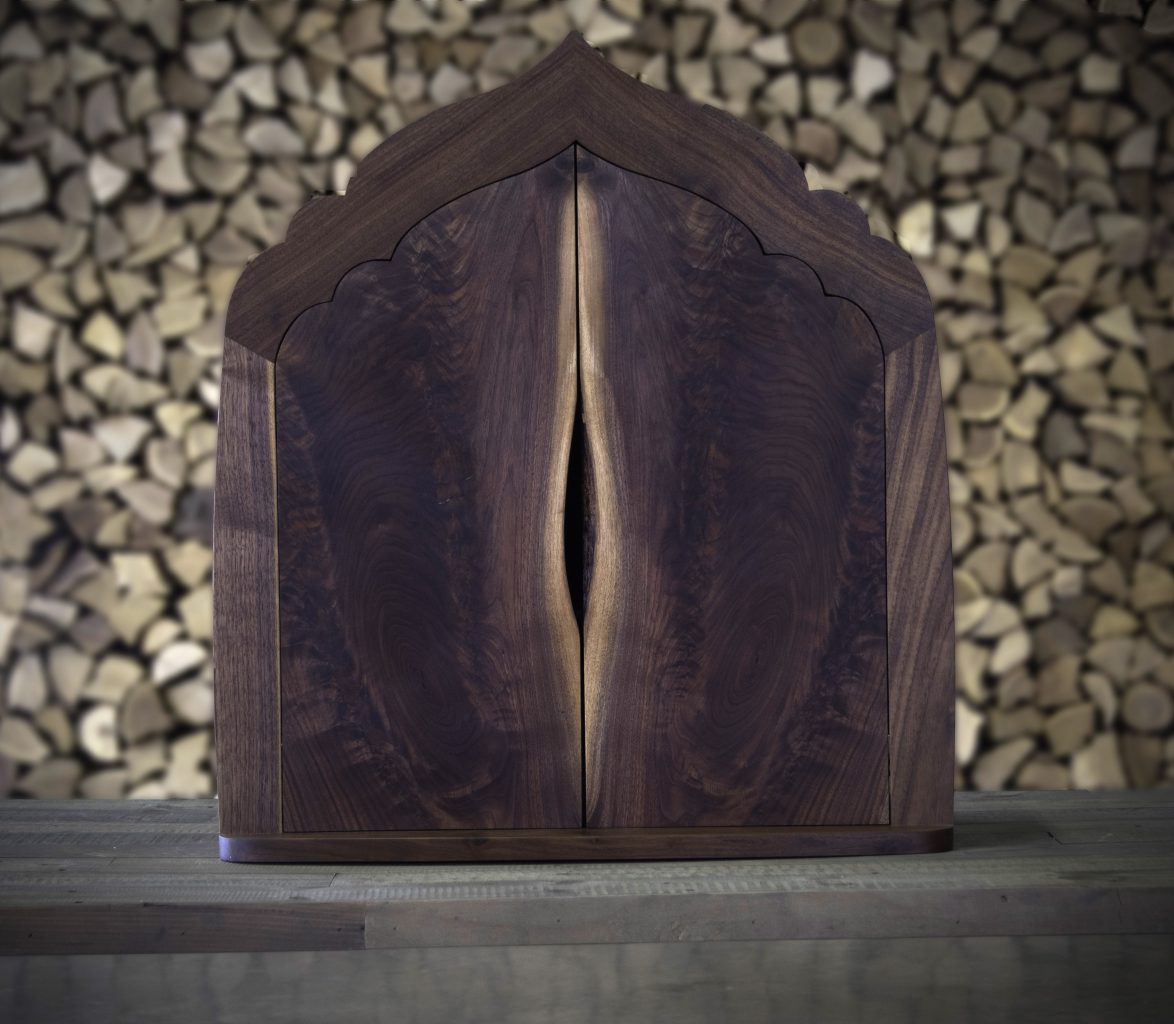 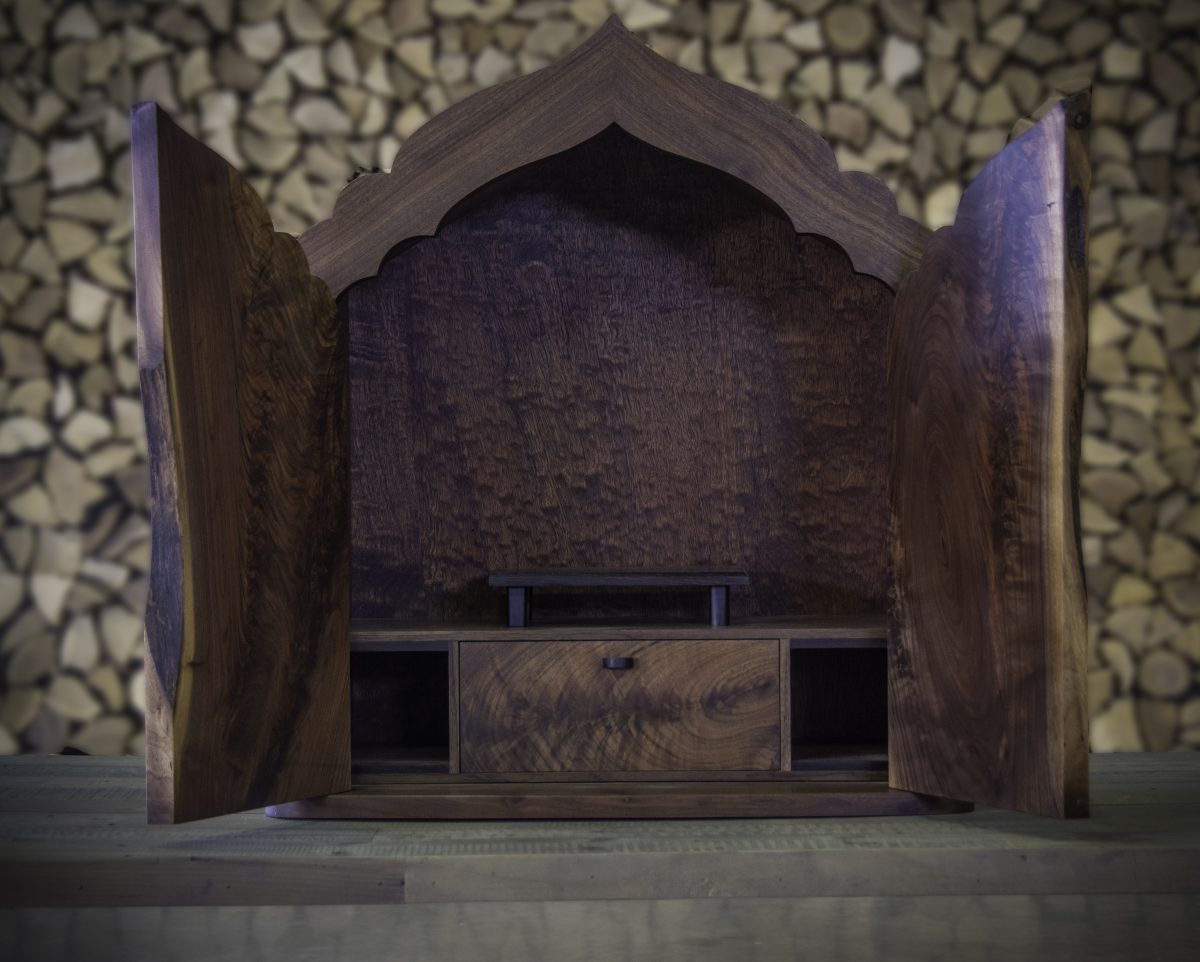 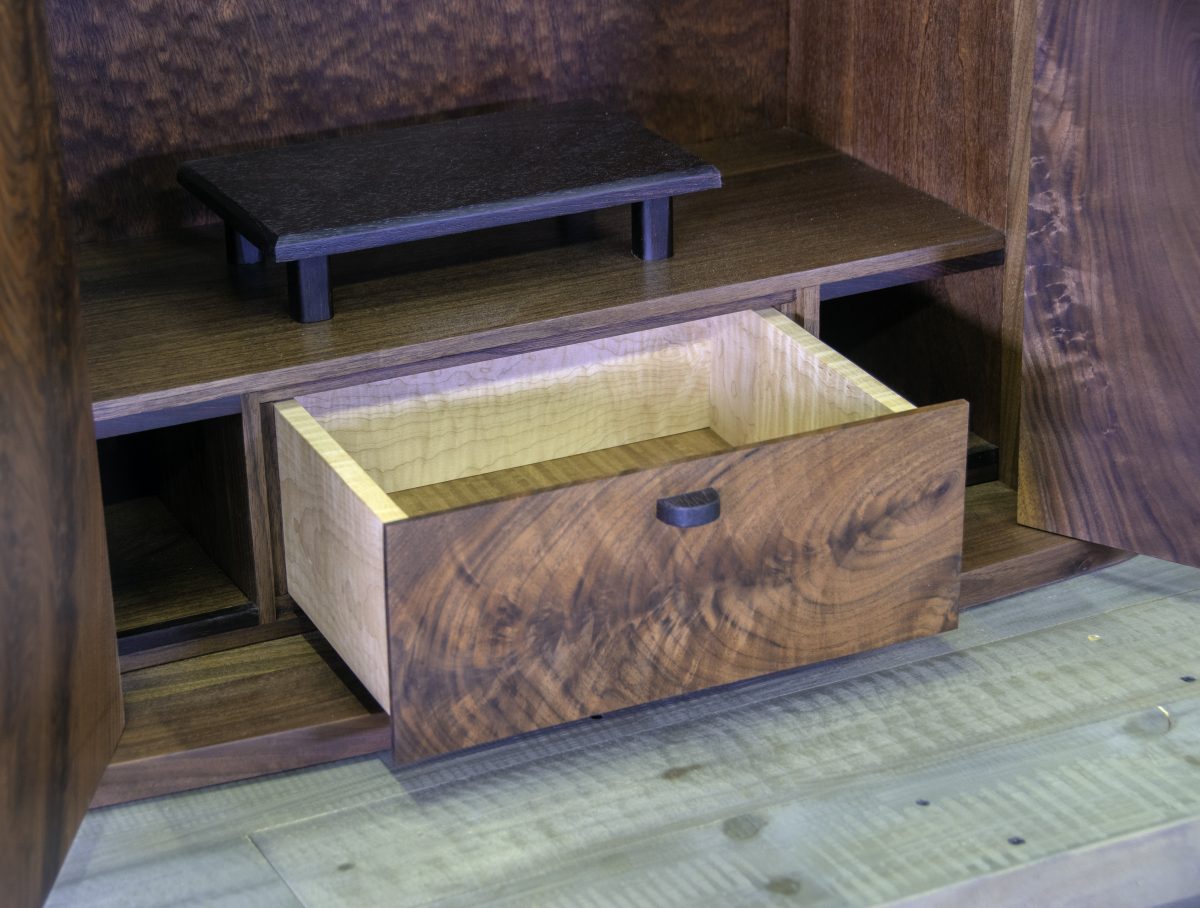 What is most striking about Nolte’s work is the unique personality each of his pieces encompasses. Nolte’s former neighbor, Carol Fulton, described the artistry she noticed in the pieces he crafted for his home. Her main wonder comes from “the sheer beauty and unusual functionality of his work. To me, it is sculpture.” Nolte’s home projects include cabinetry, rolling pins, and fascinating cabinets with dramatically slanted doors. In one piece, the cabinet’s front panels are made from two symmetrical pieces of wood cut from a tree whose trunk had grown over a branch. The branch panels, received from a local wood-cutter in Salem, sat in Nolte’s workshop for almost 10 years, until he finally figured out what to do with them.

Most often Nolte has an idea of what he wants to create before he buys the wood, but occasionally things do not go as planned. One important aspect of woodworking is letting the wood dry, either in a shed, allowing one year of drying per inch of wood thickness, or kiln drying, which can dry wood in a matter of days to months. If the wood is improperly dried, it has the chance of cracking or splitting. This was the case of a slab Nolte received from Oregon a few years ago which was about 5 by 12 feet. In transit, the slab split completely down the middle, leaving it cracked. Rather than be discouraged, Nolte used a series of butterfly joints — two dovetails connected together to form a bowtie-like shape — to fix the gap. 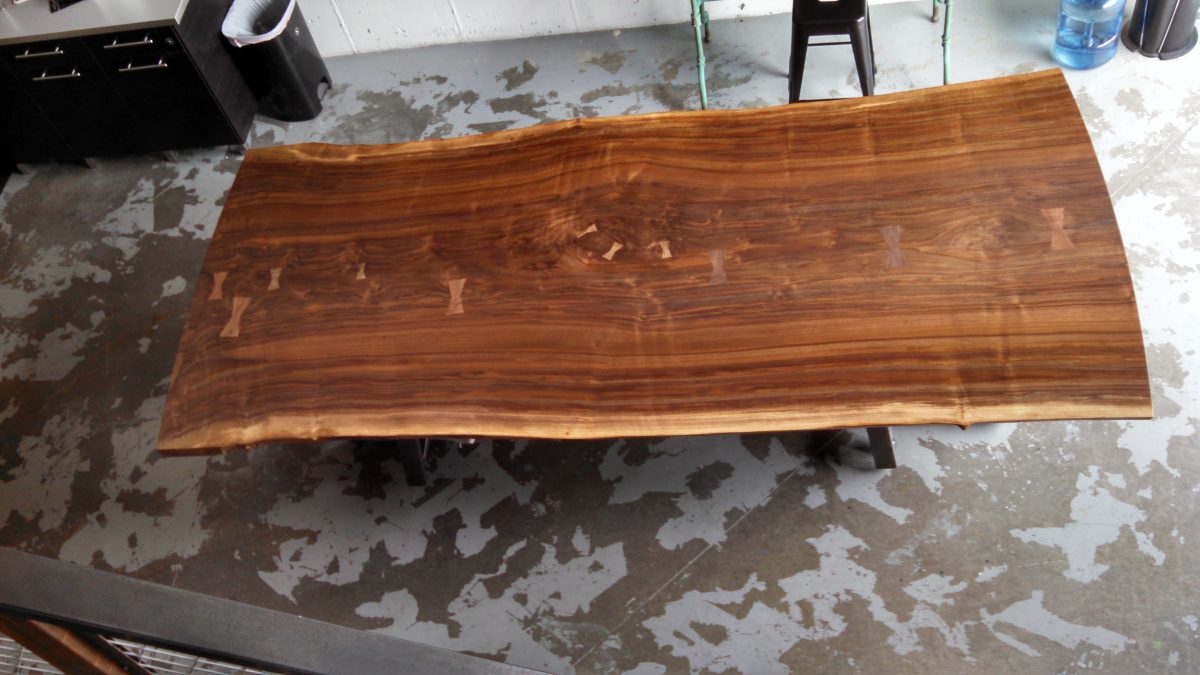 This type of inventive problem solving is essential for fine woodworking, even after a piece is finished. Nolte created a cherry cabinet in a classic Chinese style with double doors for one client, who soon after its creation moved to Sydney, Australia, taking the cabinet with him. After a few months, Nolte received a call that the wood was growing, the doors overlapping. “This is quite common when wood goes from one climate to another. It never really stops growing and changing, especially in a dramatically more humid or dry climate,” he explains. Since it was only temporarily in Australia, Nolte said he would have a look when the cabinet came back. After a year to reacclimatize the wood to dry Utah, Nolte took a look at the cabinet to assess damages. His initial construction was with loose splines, allowing for the wood to expand if necessary. After disassembling the pieces and gluing them back together again, the cabinet was almost back to new.

The biggest threat facing the handmade furniture industry, Nolte explains, is mass chains like IKEA that take popular ideas and shoddily mass reproduce them. “There’s nothing quite like the beauty and precision of handmade furniture. Those are the pieces meant to last, to keep for generations,” he expounds. One of the most important factors to appreciating woodwork, he explains, is to look for the artist’s hand and design style. Each piece has its own personality, each woodworker has their signature way of doing something. Even if it’s the same design, each piece will be perfectly and critically unique, Nolte asserts. 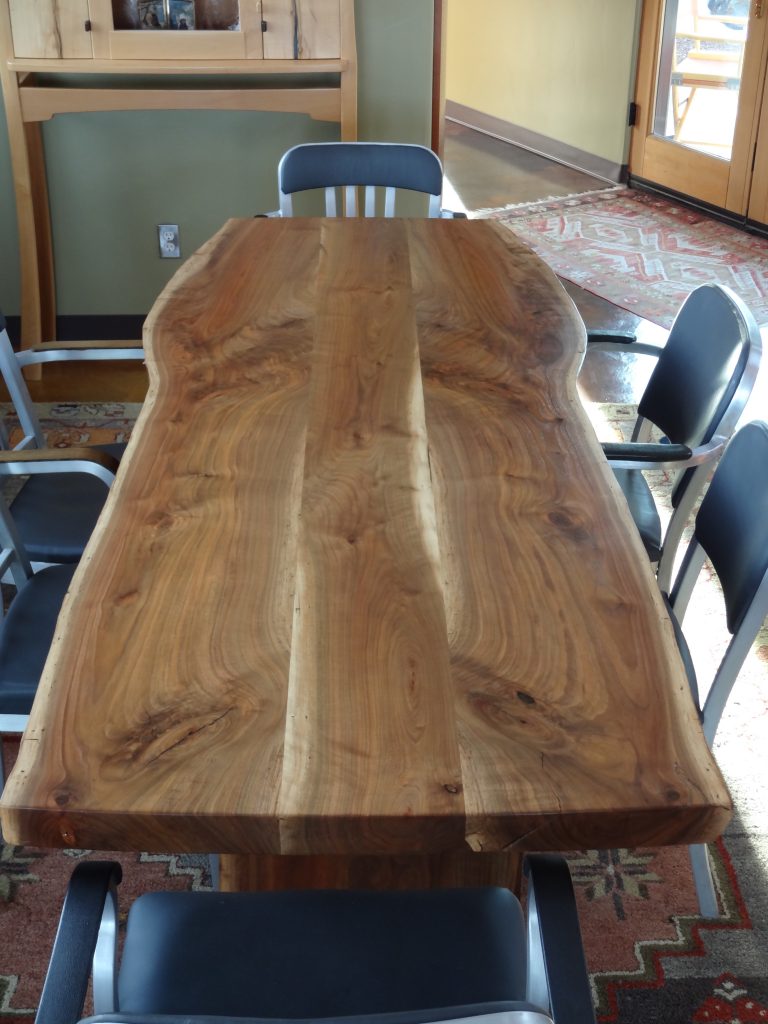 Ron Nolte is represented by Gallery 24 in Torrey. You can find more of his work at his website.