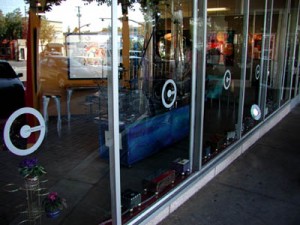 Daryll Erdmann’s CHROMA GALLERY provides the storefront for the Rockwood Art Studios in Sugarhouse. Located at 1064 East 2100 South, between the Bingham Gallery and the Maytag Store, the studios is home to over fifteen artists, Erdmann’s gallery, and Jill Davis’ frame shop. Almost all of the occupants have been in the studios since the beginning in 1999. The rents are very reasonable and most of the tenants expect the place will be viable in its present state at least for a few more years. Owner Dave Johnson (yes that Dave Johnson) is in such good favor among the artists that they have elected him most valuable patron of the arts.

At the entrance to the Rockwood Art Studios you will find j. davis frames. Jill Davis opened her frame shop when the Rockwood Studios opened in the Spring of 1999. Prior to opening up shop in Sugarhouse, Davis had been working out of her home after spending eight years framing for Phillips Gallery.

Davis studied art in New York before coming to Utah where she completed her degree at the University of Utah. She has foregone the possibly more lucrative job of framing posters and prints to concentrate on doing work for artists and collectors. She uses only museum quality products in her framing and provides a refreshing personal relationship to the experience. By our judgment, she frames for considerably less than most framing shops in town. And original art is always framed for 10% less.
Frame your art and still be able to pay the rent.