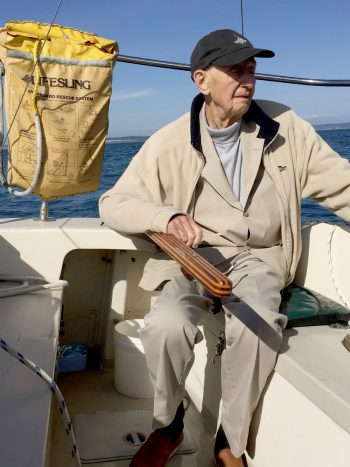 “Life is too short to eat bad food,” Robert Lewis Bliss, FAIA, always declared as he appreciatively dug a fork into a small plate of seared prawns in a Zürsun yellow split pea puree at Manoli’s fine Greek restaurant near Liberty Park; or when he hoisted a thin slice of gluten-free pizza from The Pie accompanied by a good Italian wine in his backyard along the U of U’s Fraternity Row. They loved him at Manoli’s – probably did anywhere; he was amiable and a consummate gentleman – and they’d somehow materialize a table for him there no matter how busy it was on a weekend night (he was a spontaneous diner and rarely thought to make a reservation).

The shortness of life, however good the food, caught up with Bliss on Friday, Nov. 2, 2018, when he died at age 97, after spending just a day in hospice care. He was still enjoying his season tickets to his beloved Utah Symphony, had recently ordered L.L. Bean shorts that will arrive in February and just last month leased a new VW Alltrack with a roof rack for his boat. (He’d been having a bit of mechanical bother with his signature silver VW bus of late and was finding clambering in and out of it more difficult with age.)

He was a fine artisan furniture maker who was frequently accepted into the Utah Design shows; an avid sailor (he hailed from Seattle where he was born on May 21, 1921); an eager gardener, both in- and out-of-doors; a tennis player who rose at 6 a.m. several days a week late into life to play the game in those L.L. Bean shorts; a lover of good prose (who would often have a student over to read poetry aloud while wife Anna perused a “spicy” mystery in a nearby chair) as well as of great music (classical or jazz, played over one of the first Bose systems this writer had ever encountered outside of a magazine ad); and owner of a television, though a tiny one that they would have to put on the living room floor so that they could watch tennis and “PBS Newshour” and, yes, “Mystery!” and then hide away — it didn’t mesh with the fine art with which they surrounded themselves.

Bliss always cut a dashing figure with his penetrating eyes and closely cropped white hair. In summer he looked ready to pick up a racket; in winter he invariably wore jackets appropriate for delivering a college lecture. He never failed to help you on with your coat — a gesture done in such a manner that it could never be less than appreciated. He was a pretty tolerant sort most of the time – had to be, living in that frat boy paradise and having previously been the founding dean of the Graduate School of the College of Architecture at the University of Utah, serving in that role from 1974-86. In 1963, Bob had agreed to head the U’s architecture department, which brought the Blisses to Utah from Minnesota. 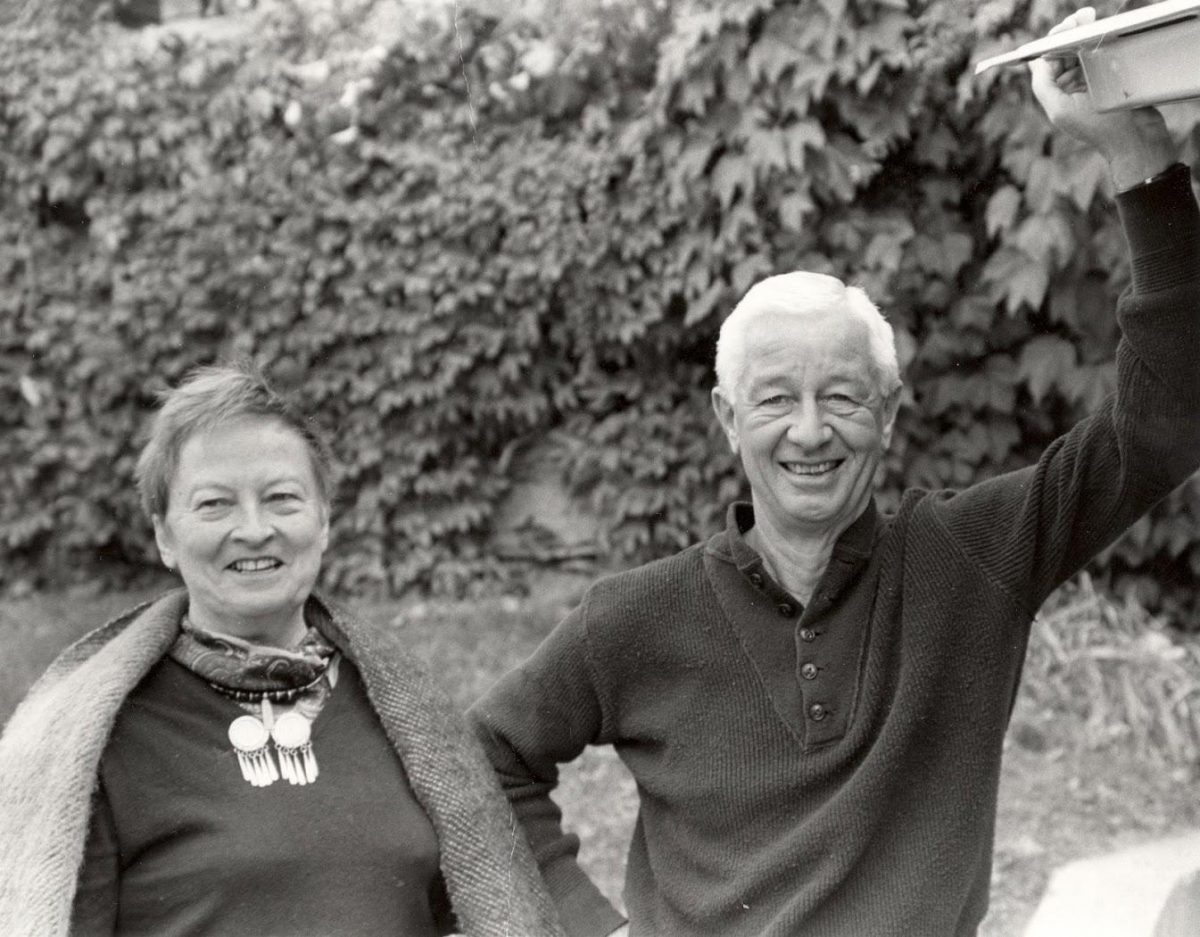 A man of undoubted brilliance, he had studied, beginning at age 17 or so, at the famed Black Mountain College in the Blue Ridge Mountains of North Carolina with Josef Albers, among many famous others (Cy Twombly and Robert Rauschenberg would later enroll there), and after the war he finished up at the MIT School of Architecture, where he met and married Anna Campbell, a force of nature if ever there was. She was at MIT’s Graduate School of Design and at Harvard and out on a date with Bliss’ roommate (who attended the Ivy League school with her) when they were introduced. “Bob and I went home together,” was the way Anna loved to tell it. “NOT!” thundered Bob, who insisted they just went back to the drafting room so she could put him to work. “And I was hooked,” he said. Whatever the truth, they bicycled around Europe, South America and Asia together studying architecture, were married, formed Bliss & Campbell, an architecture and design firm in 1955, and adored each other for 65 years.

The Blisses and Josef and Anni Albers would become close friends (Anna studied under Albers, too, some years after Bob) and Bob’s work would travel with the Albers’ in Black Mountain College: Shaping Craft + Design, a comprehensive traveling exhibition about the revolutionary experimental liberal arts school (1933-57). Since Anna was not a student there (Bob maintained her connection to the school was strictly “through marriage”) she was not included in the show, but when it opened at the Nora Eccles Harrison Museum of Art at Utah State University, director Katie Lee Koven saw to it that the Blisses had their own exhibit in the lobby – just the second time their work ever was shown together. Relational Forms: Robert Bliss & Anna Campbell Bliss highlighted several furniture pieces designed by Bob with a number of paintings and prints by his wife. In typical fashion, Bob said he was delighted that “Anna enhanced my furniture show with her art.” 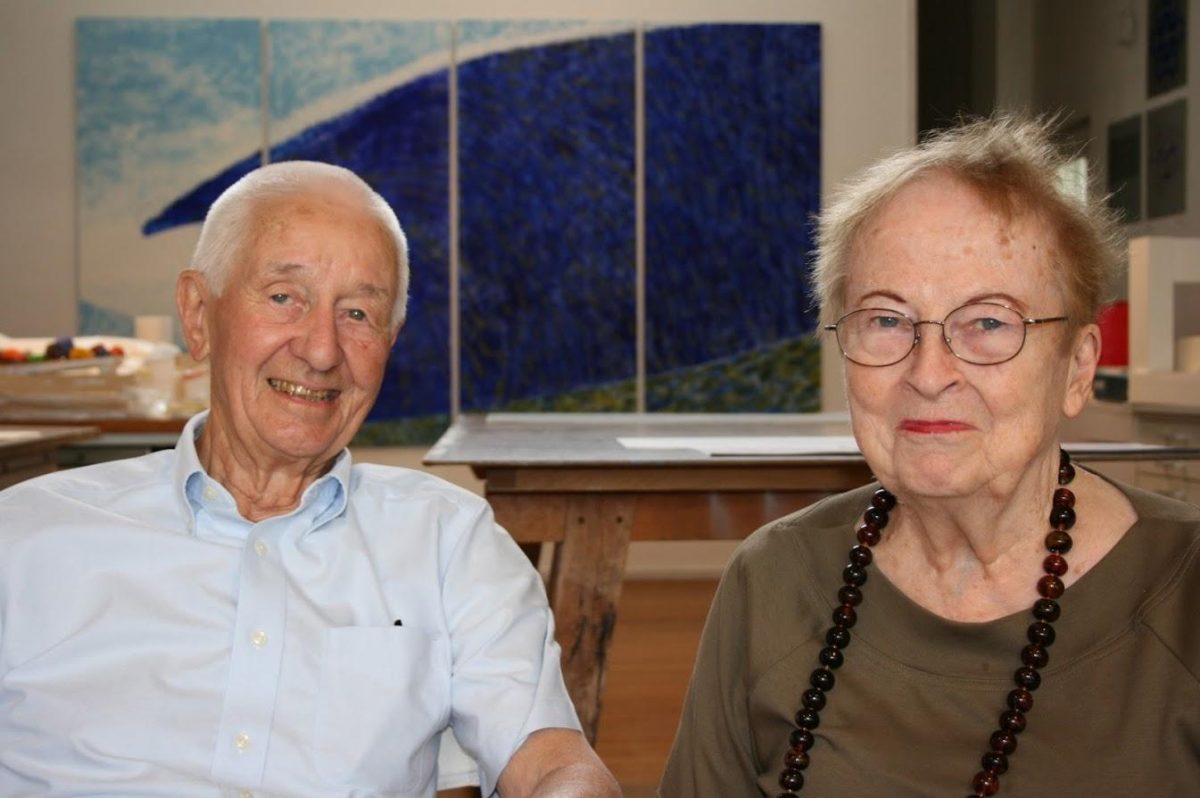 Other work by Robert Bliss was included in the Black Mountain show in the main gallery: one vital piece being “Lady Murasaki’s Fan,” (1993) an elegant fan chair (30 x 37 x 24 inches) replete with black suede cushions. It has 32 teak legs and only one bolt holding it together.

His arresting modern designs are intentionally practical as well as beautiful. A set of three aluminum cube tables (11 x 11 x 11 inches) begged to be used as well as looked at. One longed to stretch out on his Deep Cradle Rocker (1991) (1/4” aluminum & French Bridle Leather 12 x 26 x 84 inches) on a granite base, even though this one resides in the Smithsonian.

Bliss became interested in urban design while teaching at the University of Minnesota (1952-63), and would carry this to Utah where he would found the Salt Lake Community Design Center, the Second Century Plan (which led to the 1988 R/UDAT and Downtown Rising Plan). He was a founding board member of the Utah Heritage Foundation and later served as its director and president, board member of the Salt Lake Art Center, president of ASSIST (community design center), received a grant to study Joseph Smith’s Plat of Zion, spent six months of study and photographic work recording pre-Columbian sites in Peru, participated in the original Snowbird Ski Resort Masterplan (1970), was a member of the Historic Landmarks Committee for Salt Lake City, and adviser to the National Trust for Historic Preservation. He worked for many years restoring Gilgal Gardens in downtown Salt Lake City.

He was made Professor Emeritus at the U in 1989, received the Silver Medal Award, Western Mountain Region AIA in 1987, was an Honors in the Arts Program recipient from the Salt Lake Chamber (1983), and received the AIA Utah Lifetime Achievement Award (2008). 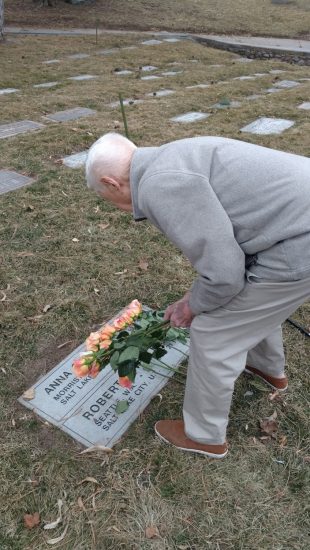 An avowed unbeliever, Bliss nonetheless faithfully drove Anna to Salt Lake City’s Cathedral of the Madeleine to attend Mass every Sunday morning when her eyes began to fail, then went home to prepare an elaborate breakfast (he did all the cooking later in their marriage and was superb at it) before picking her up again following the service to go home to eat. After Anna’s death in 2015, he began going to Mass weekly at the Cathedral in her honor. I don’t think he found God, but he surely found a community that valued Anna greatly.

Bob Bliss, some of his furniture, and the home he shared with Anna Campbell was recently featured in a short Radiowest Habitat video that’s not to be missed: https://films.radiowest.org/series/habitat that features one of the “Lady Murasaki’s Fan” chairs. A public celebration of his life will be held in the spring; details to be announced at a later date.