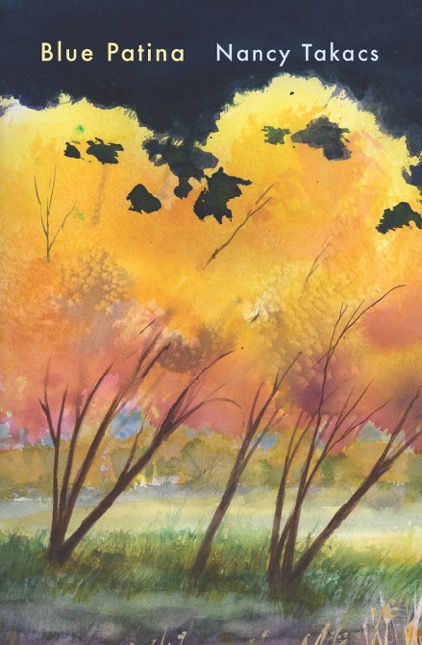 I have long been acquainted with Nancy Takacs’ poetry through her beautiful chapbooks. Thus, it was a pleasure to read so many of her poems in her latest collection, Blue Patina, published by Blue Begonia Press. In these poems, I continue to see how deeply the natural world is embedded in her language. The first poem “The Voices” acts as a “proem” or preliminary commentary to what we will encounter: myriad observations that contain an undertone of wonder found only by those who have wandered far enough to the edge of a Utah forest or into the center of a foxglove blossom to see what others can’t or won’t notice. In this poem, the speaker embodies two voices—one of the bee-blossom and one of a bicycle. There is a third voice—a night voice—that exists in its own realm (and shows up at length in a section titled “The Worrier”). But the bee-blossom voice and the bicycle voice invite the speaker (and the reader) to be open to whatever experience is encountered. The former is internal and “hums in the wrist” while the latter is external and becomes “the gold words of motion.” This blending of senses is exemplary of the linguistic mélange that occurs in other poems. As contrasting patterns emerge—of light and dark, heaviness vs.weightlessness, internal and external landscapes—the poems transform what is routine in nature to a ritual in the human world.

Blue Patina is divided into four sections. The first, also titled “The Voices,” captures an earlier generation’s style of absentee parenting when the orbits of children and adults rarely crossed paths. Summer nights in New Jersey of playing games with friends, riding bicycles, and discovering both a love and the power of words create childhood routines that are contrasted against the adult rituals of fathers spending time at the bar and mothers losing themselves to favorite television shows or attending church. There are several lines that indicate a restlessness and anticipation for something beyond the implied security of these routines. In “Night Game: School” Takacs writes, “We were finally off our gold or silver/Schwinns that had winged us through/humidity and heat…/Now we needed dark/to defy anyone to call us in.” In “Summer School” the speaker contrasts the adult rituals with one of her own: “My mother’s watching an old movie,/my father’s at the tavern/nursing a beer over a game,/my aunts are upstairs ironing/white blouses for tomorrow’s teaching, typing./I put the lined paper on the table, take out the pencils/I’ve filed to needlepoints, and place/their gold bodies as paperweights.” The pencils are described both accurately and metaphorically. This careful and transformative attention to what initially seems ordinary is another technique used throughout these poems and turns a routine action into ritual.

Four poems in this section explore a family dynamic that belies the suburban security of childhood routine. Takacs dates certain aspects of this time when she addresses a brother: “No one knew back then/what you and I know now: personality disorders, AA.” In these poems, Takacs does a masterful job of contrasting images of lightness vs. heaviness—sometimes within a single line such as when the father returns from a night of drinking: “…my father’s heavy steps/ sparkle on our skin. At the back door he calls me—Apple, I fell. I’m bloody. Come clean me up.” The daughter carries the weight of the father’s alcoholism; even her nickname, Apple, implies that the father is relying on her sweetness, her stability, to carry him through.

These poems are followed by “Rhinestone Pin.” Curiously placed, it is the only one in this section set in Utah. However, it sets the groundwork for patterns in later poems—now an adult, the speaker wanders near an irrigation canal in the desert and remembers an artifact, a rhinestone that takes her back to that past. The adult routines of her childhood repeat themselves in her mind, but this time they exist in the midst of a physical beauty that provides an emotional intimacy the parents could not offer. The desire to coincide one’s existence with the natural rhythms of the earth continues to create a spatial and temporal topography throughout the book—what is routine in nature becomes ritual beneath the speaker’s observant eye.

In two of the remaining sections, “Utah Map” and “Still,” the poems provide a sense of place—namely the rural area of Price. The vastness of the landscape as described in the poem “Utah Map” is contrasted against specific landmarks such as “an American flag/ time and wind ate except/ for a few withered stars” drilled into Balance Rock by “a woman from the town of Elmo” or an Anasazi granary near Escalante. One of the most intriguing sections is “The Worrier,” an amazing sequence of poems that reads as a series of questions and answers. The syntax in these poems is looser than in other sections and they read unpredictably, as if any answer will work for the questions. The surprising answers create some wonderful juxtaposition of lines, some of which correspond to each other as musical phrases: “What gardening things will you talk about? The coolness has kept the lobelia so blue this year./I’ve made two new winding paths with lake stones./The humming birds are swarming the bee balm.”

The central poem of this section, “The Body,” reads like a lovely aria. The questions span from asking about what is inside the sky, to the moon, stars, and Venus, to finally the lake. The answers curve away from the questions to create unique spaces such as in the following: “What is inside Venus?/ A hatred of enamel./The touch of minnows/at my ankle./What is inside your silence?/ An alcove of jackrabbits/A jeep door slamming/The flat landscape of a lip.” The answers are lyrical and strange as if the questions are pebbles thrown in a pond to stir not responses but ripples of linguistic rhythms. This is a different voice than the conversational one that writes “Tammy wears her juniper-berry necklaces/she sells at the checkout, spins around/with coffee, and roars her Joplin voice to On the Road Again and Willie’s ease.” But not so different from the voice in these lines about a foxglove “The blossom/freckles inside its bells,/skims the butterfly that grazes/the doorframes, rouses/one green humming bird.”

I realized as I read this book that I was entering into the mind of one who sees and hears many things and by doing so creates a ritual out of pocketing aspen leaves, driving a jeep through juniper, or of talking with townspeople at the local grocery store. The ritual involves community even when the speaker is solitary. In the final section of the book “Still,” the interrogatory voice of the Worrier is replaced by a contemplative yet exploratory voice. Here the meditative bee-blossom voice and the wandering bicycle voice from the first poem coincide in a balance between the human and natural world as is seen in first lines of “Lotus”: “I still want the day to swim/with blue bunting, my fence to cloud with hawkweed,/the greening field under it to rise/so the gate will not open.” This terrific poem continues as a mantra of desire but finally settles on one botanical word that describes best this multiplicity of sight and voices existing throughout the book—rhizome. The poem ends with the following lines: “I want…/to feel how the needles/of hemlock dissolve in a pond,/and know under the surface/how long the trail of rhizome/can be, for one blossom.” These last lines reveal Takacs’ own hidden poetics—a nod to the invisible, extensive roots that yield a poem or even a single word on the page. Yet, despite the hint of a complex source, the emergence of a linguistic landscape seems effortless. Thus, the gift of these poems: sight on the ground or in the sky–patient, observant, sensory, precise, and always, always exploring.

Nancy Takacs is the author three chapbooks, Pale Blue Wings, Juniper, and Wild Animals, and a full-length book, Preserves. She is a former creative writing professor and wilderness studies instructor at the College of Eastern Utah in Price, and has, for the past decade, worked with inmates, seniors, and children, for the Utah Arts Council’s Artists in Education program. A recipient of the 2013 Sherwin W. Howard Poetry Award from Weber: a Journal of the Contemporary West, the WFOP Kay Saunders New Poet Prize, several writing awards from the Utah Arts Council, and the Nation/Discovery Award, she holds an MFA from the University of Iowa. Originally from Bayonne, New Jersey, she lives in Wellington, Utah, and in Bayfield, Wisconsin, near Lake Superior, with her husband and two dogs.

Danielle Beazer Dubrasky is an associate professor of Creative Writing at Southern Utah University. “Ruin and Light” won the 2014 Anabiosis Press Chapbook Competition. Her poetry has also been published in Contrary Magazine, Sugar House Review, ECOllective, Tar River Poetry, Weber Studies, CityArts, and Petroglyph. She is also a two-time recipient of the Utah Arts Council first place award in poetry. She grew up in Charlottesville, Virginia, but has spent the last 20 years in southern Utah.