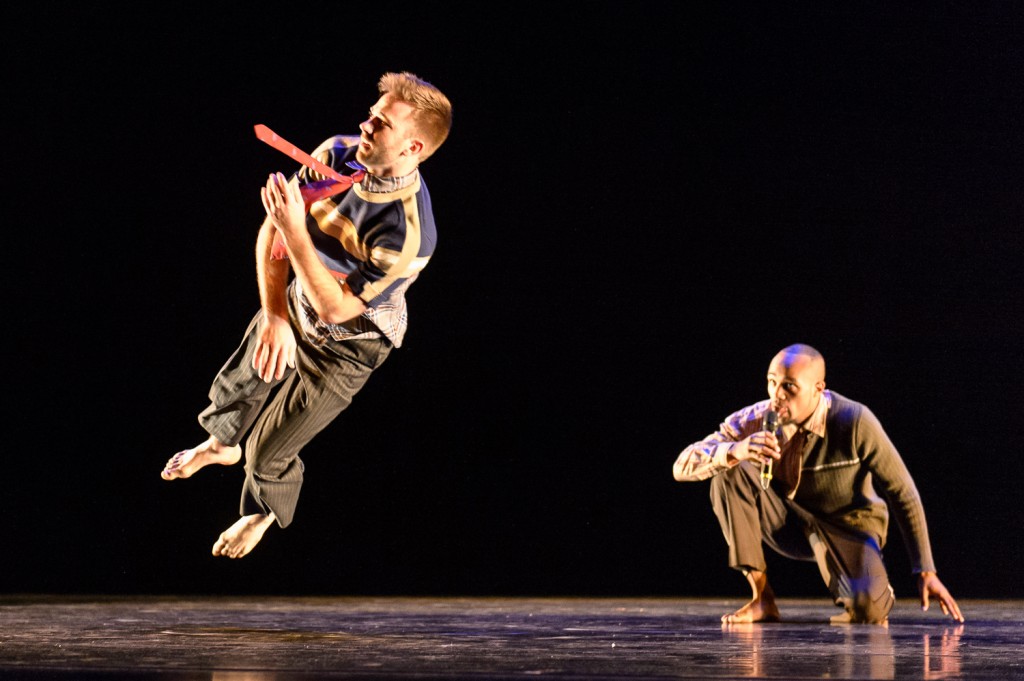 Featuring the work of three male choreographers, Ririe-Woodbury’s season opener had no particular through-line, except perhaps in its attempt to stake a claim for the group on being “contemporary.”

The strongest work in the evening, artistic director Daniel Charon’s, was arguably the least au courant, harkening toward solidly 20th-century modern dance traditions. “Storm” began with a rush of orchestral sound, a score by Michael Nyman. The entire company tumbled out onto the stage and continued to enter and exit rapidly in dazzling patterns of thick, athletic gusts. It was the sort of piece where the scale, both in time and space, seem to extend far beyond the arbitrary frames of proscenium and curtain cues. Recalling the lush ensembles of José Limón, Doug Varone or Carolyn Carlson, “Storm” felt like a kinesthetic extension of the score’s three movements. Its loud, cinematic grandeur had me thinking, “If Terrance Malick had made dances, they might have looked a lot like this.” The void of the theater felt charged, like a sliver of a long expanse of flat land cut by a setting sun. It seemed that the six company members were dancing in a much larger space than that circumscribed by the building we occupied.

The entire ensemble participated, but the work seemed to hinge on the company’s men: Yebel Gallegos, Brad Beaks and Bashaun Williams. All three were shown off for their ballon, but also engaged in intimate duets and musical, self-elaborating solos. There were a few little details amiss, such as costumes that didn’t quite fit the movement, but as a vehicle for ecstatic dancing, Charon’s work was a great success. He is very lucky to have inherited this iteration of Ririe-Woodbury, which even after the departure last year of company dancer Tara McArthur seems to have maintained a unique sense of palpable friendship. New dancer Melissa Younker held her own throughout and looked like she’d been with them for years.

Where Charon successfully channeled the efforts of his company, the out-of-towner offerings felt like they left the dancers squandered. Jonah Bokaer’s “fragments” looked like a composition class conducted in the middle of a light sculpture (there was a large triangle made of halogen bulbs on the floor and mirrors hanging in a patchwork pattern throughout the space). Many of the performers had intriguing passages of movement, but the moments of true visual pleasure — such as Mary Lyn Graves seeming to lose her feet when she stepped into the dark center of the triangle — felt accidental and were all too infrequent. “fragments” was almost worth watching for Alex Bradshaw’s rich, internal solo, but ultimately had nothing to say.

“one hundred thousand” by German choreographer Johannes Wieland, was equally lacking in direction, though somewhat more playful. Yebel Gallegos’ comic timing as he sang in a blonde wig almost saved the work from its ponderousness. It’s interesting to note that while all of this is repeatedly referred to as “contemporary dance” in advertising, it’s the work of three males largely reiterating modern dance traditions of which they are contemporary exponents. At this, Charon was very successful. Bokaer (who’s past is Cunningham) and Wieland (who refers to Western European dance theatre) seem less sure of how to carry on the torch.