Ririe-Woodbury Looks to Fill the Void

Ririe-Woodbury’s Fill In The Blank on Thursday, January 27, was a wild ride of dance, throwbacks, and emotional tension.

The show opened with the premiere of jo Blake’s “coincidences, when we meet up.”  Blake is the only Utah-based choreographer in the program, but it’s nice to see Ririe-Woodbury reaching out to the Salt Lake Community for choreographers. In Blake’s dance, the first thing I noticed was I could see all the dancers’ feet planting into the floor. The space was so close and intimate, those finesse movements were a new aspect of Ririe-Woodbury that is usually lost in the grandness of the Rose Wagner Theatre. The closeness was an important aspect for the first work, as the textures and energy of the movement were gentle and tender. The dancers weaved in and out of each other using both gentle brushes of contact as well as firm supportive lifting. It was virtuosic and totally androgynous. I felt as though I was watching energy carving and weaving through space. It was a wash of satisfying technical skill as well as a familiar energetic ride. The gentleness of the piece was a grounding experience that gave me time to settle in for the wildness of the dances that followed. 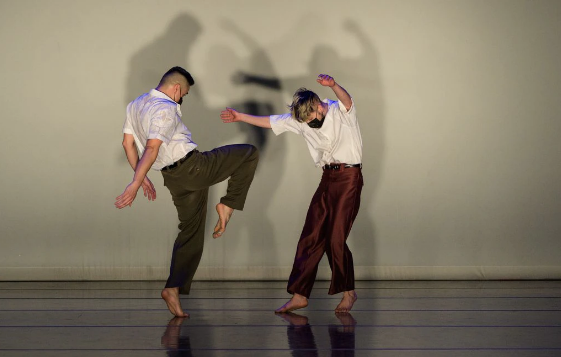 Fausto Rivera, left, and Nicholas Jurica dance to choreographer Andrea Miller’s “I Can See Myself in Your Pupil,” photo by Stuart Ruckman

“I Can See Myself in Your Pupil” was the most vivid case of deja vu I had ever experienced. It wasn’t until about a quarter of the way through the piece that I realized: this was the first contemporary dance work I ever saw. This is the dance that made me think: “I have to dance.” I saw this work as a teenager when Gallim Dance visited my home city and I’ve never been able to remember the title, the choreographer, or even the year I saw it. Now, at the Regent Street Blackbox of Salt Lake City in 2022, it all came rushing back to me. My discovery of the limitlessness of dance, my first time learning repertoire, the memory of being told my body was full of glitter and to dance is to shake it up. It was a wild ride to compare this real dance experience to the dream-like memory from my adolescence. It was a confusing experience of being excited and also acknowledging how far I’ve grown since then. The dance itself started the same way I remembered it on that fateful day, when they all came out one by one, shaking and giving wild fleeting facial expressions. To see Ririe-Woodbury do it was thrilling, like running into an old friend unexpectedly. As the dance went on, I started noticing some things that my naive eyes had not. The dance moves to a solo performed by Megan McCarthy, and it may be the bendiest thing I’ve ever seen in dance. I witnessed tension and physical anomaly followed by a powerful trio of men. The dance flowed through a duet with both humor and discomfort, and then to a trio fighting for the spotlight. The dance ended with powerful group choreography full of facial expressions that were wild and constantly changing. As it kept going, their power kept growing. The dance ended abruptly, and I was left stunned. “I can see myself in your pupil” checked every box.

“Look Who’s Coming to Dinner” is a dance by Stefanie Batten Bland based on the film Guess Who’s Coming To Dinner by Stanley Kramer. It opened with the dancers entering the stage masked, and they dropped their masks to reveal plastic-looking smiles framed with overly-posed hand gestures. The dance began with theatrics of the dancers in nervous introductions, setting tables and chairs, being ignored and pressuring others to join. As the theatrics began to blend with more conventional contemporary dance, the tables began to literally change roles. The dancers moved them through the stage so the three tables were stacked on ends. Personally, this was my favorite part of the dance, when the tables turned into doors which everyone had a turn knocking on. They slid apart to reveal the person on the other side, and they slid through the space to hide others again. The movement of the tables settled on a magnificent solo performed by Alexander Pham. His interactions with this table-door continued to build on itself and defy gravity. It was exciting to see the support and power of the stabilizing dancers as Pham floated along the top, and leaned in with his whole body weight. The scene began to shift again until the tables formed a wall through the center of the space and the spotlight shifted to Miche’ Smith. Her solo was a tangible expression of anxiety and working up the courage to speak. Her theatrical performance heightened the intensity of the entire work. As she was plucked from the ground and set down behind the wall out of sight, the spotlight kept shifting among the rest of the dancer as each one physicalized their own experiences of anxiety about owning ones own identity. The last to have a feature was Corrine Lohner. She was surrounded by the other dancers as they moved around her, sometimes framing her and sometimes enveloping her. As the intensity grew the movement became slower and more controlled. The dancers found themselves huddled together in the downstage corner, and they all knocked on the unseen yet understood door between the audience and the stage. Lohner raised her hand in a wave and said “Hi.” And with that, the show ended.

All in all, Fill in the Blank by Ririe-Woodbury Dance Company was a fun night of concert dance. It was lovely to attend a show in person and feel generally safe about it, as upon entry they checked Covid vaccination cards and identification. It was fun to sit around other people and hear them exclaim about the parts they liked. One audience member whispered, “Look at her toes!” during a slow-motion walk from Megan McCarthy. It was endearing to witness the young audience members in awe of the technical prowess and the roller coaster of energy throughout the evening. I hope to see Ririe-Woodbury in such intimate spaces in the future, and I hope they continue to commission other local choreographers.