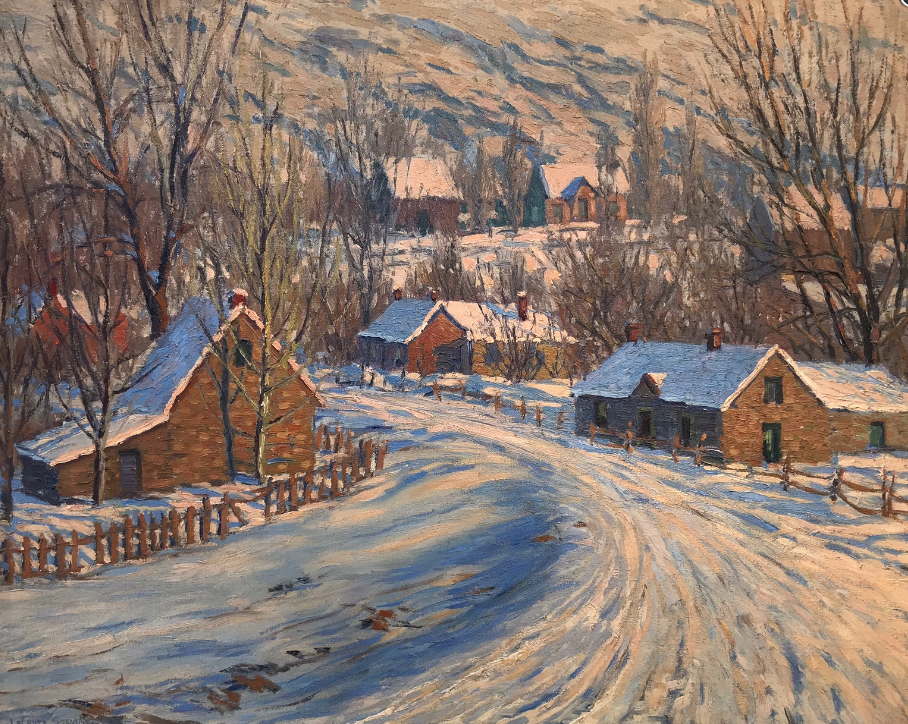 By unanimous vote, the Logan City School District Board of Education finalized the sale of 10 paintings in the district’s collection purchased with the milk money of elementary students in the 1930s that became worth a good deal: in this instance $435,061.

While David Ericson, the Salt Lake City art dealer who handled the sealed-bid auction, says it was agreed that per-item prices would be undisclosed and buyers would remain anonymous, the prices were read aloud at the board meeting and several later reported by the Logan Herald Journal: “Farmington Winter” (1924) by LeConte Stewart sold for $126,000 (Ericson had estimated it would go for $80,000-$100,000); J.T. Harwood’s “Gleaners after Millet” for $68,500 and Henri Moser’s “Aspens” for $10,650. “The auction included 11 paintings, but Minerva Teichert’s ‘The Spinner’ did not receive bids above the appraisal value and was not sold,” according to the newspaper.

Ericson says that while he had 32 bids from outside the state, many of those from the East Coast, the eventual buyers were all private and from Utah (two from Logan), with the exception of one who is from California but lives at Sundance.

The works will be seen again in the state, says Ericson. “All these buyers are people who would be willing to lend them to an exhibition. They didn’t buy them to bury them,” he says.

Ericson believes the school is glad to still have the Tiechert in their collection. “The important thing is that they use the funds to restore the works they have left – there’s a great B.F. Larsen, about 4 foot by 3 foot, but with a crack over the whole surface because the paint is so thick – and spend some of the endowment funds on new work to fill in the gaps and keep the collection alive, fresh, and interesting.”

District Superintendent Frank Schofield told us that the intention is to use the funds to produce giclées of the auctioned art for display in the schools; to gradually clean and restore the remaining pieces of art so they can be appropriately displayed; and to create an endowment to provide supplemental education and cultural experiences for students who otherwise would be unable to access them.