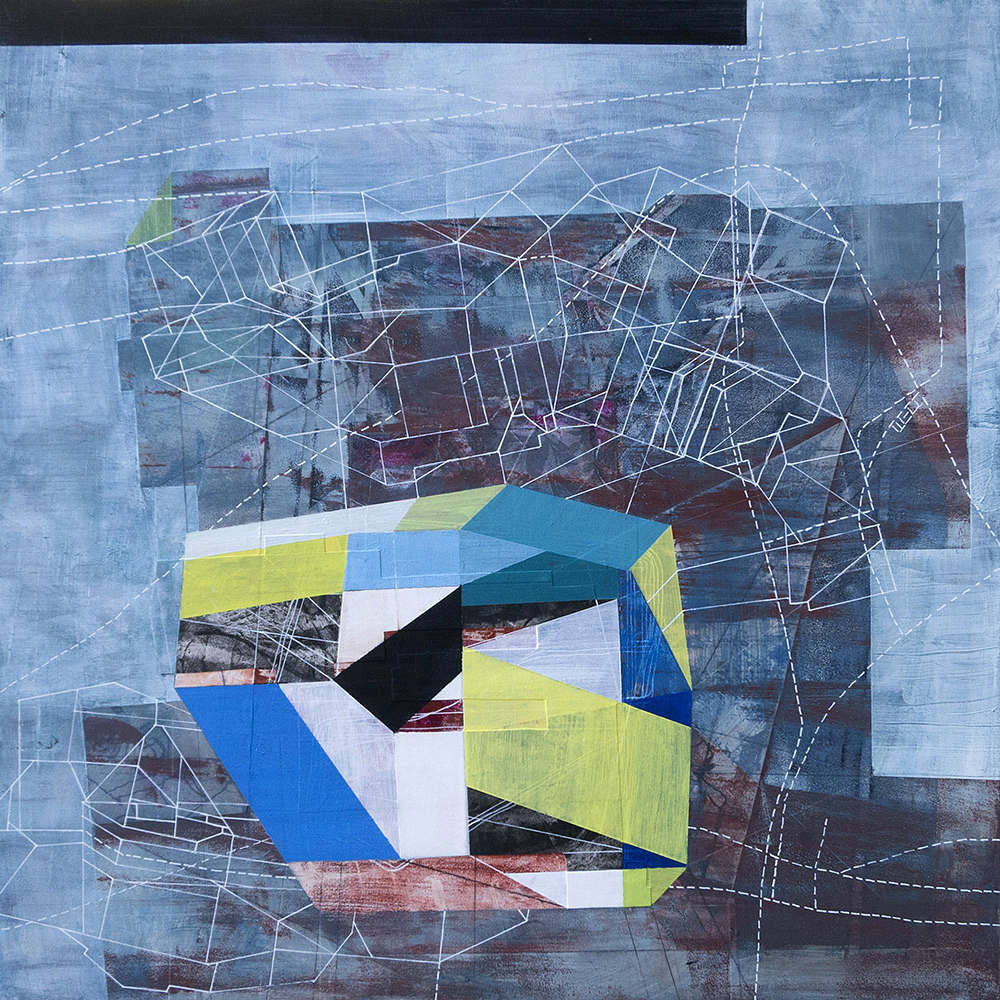 Linnie Brown’s approximately two dozen pieces in her show Retrace at A Gallery, with titles like “Often Requires Additional Building,” “Need Only to Reattach,” and “The Line Between Now and Then,” make you think of nothing more than — what if all these paintings, with their flanges and tabs and connecting lines and outlined flat, mostly boxy, shapes, could become three-dimensional?

These would be the mobiles of all mobiles, dangling in this very (indoor) courtyard in A Gallery where they are now displayed.

The artist seems to have picked up the lament of The Lost Draftsman, the architect who once manned a drafting table but mainly now presses buttons on computers; The Lost Seamstress, the woman who once put tissue-paper patterns of her choice on fabric of her choice on a long cutting table to make a garment, but now listlessly yanks at rows of hangers in a store.

Drifting through these, too, is the tune of the Lost Japanese, in a kimono: through all the pieces here is the splendor and mixture of almost silken colors and sanded multifarious textures and patterns the Japanese kimonos bear.

The cutting table for a new kimono must have held, like these paintings, many almost purely rectangular pieces, to be basically one border attached to another then drawn in by a sash. In Brown’s work there are a great deal of ribbon-like narrow lines, often filled with pattern; these suggest, even, the kimono sash, or fabric strips left over from pattern pieces.

Is this art that longs for a project, and perhaps its beauty is the longing, rather than the completion? Or is this art that is, per Brown’s artist statement, “the mapping of place and memory,” i.e., a collecting of impressions from places/experiences already happened, being preserved? 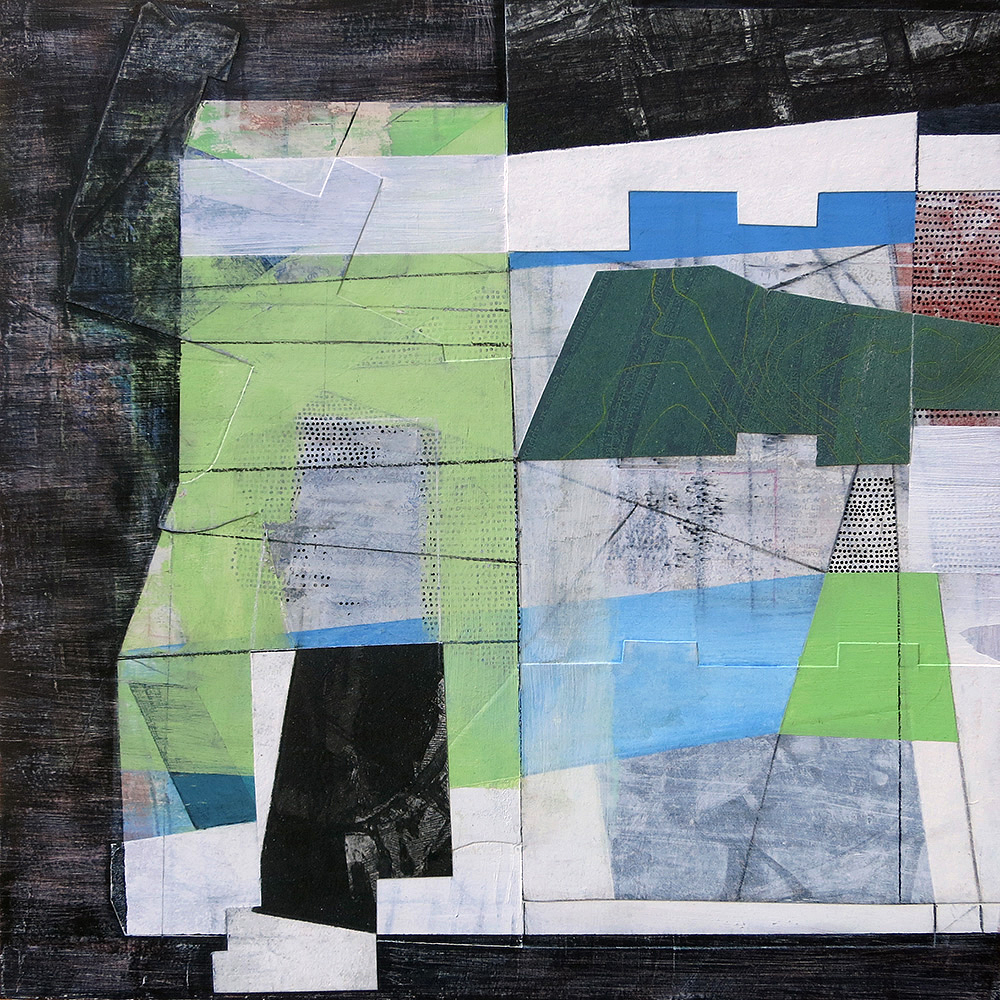 In truth they would be strange mobiles: many pieces reaching out for a waiting, comforting, symmetrical side, and finding only a gap or a distant surprise shape, gaps that would spell doom for a trapeze artist reaching out and not finding the hoped-for, waiting rung. Mobiles asymmetric in countless ways.

Change/joy brought about by successful project completion seems eminent in many paintings’ titles: “To Eliminate Possible Loss,” “Twice Around a Resistant Detail,” “Carry the Heaviest Walls,” and “The Position to Fit Around.” Carry on, these titles seem to say: complete the project.

All include whites (translucent, mottled whites, like rice-powdered women’s faces in Japan, or pale tissue-paper of patterns); and always, blacks (suggesting the black of Japanese hair or the even blacker shiny long hairpins seen in Japanese women’s upbound hair in old paintings and drawings? Or the dark underside of the drafting table, the dark underside of the dressmaker’s cutting table, even the darkness of our brains, where memory is kept?) Again, argument between the past and the constructs of future. 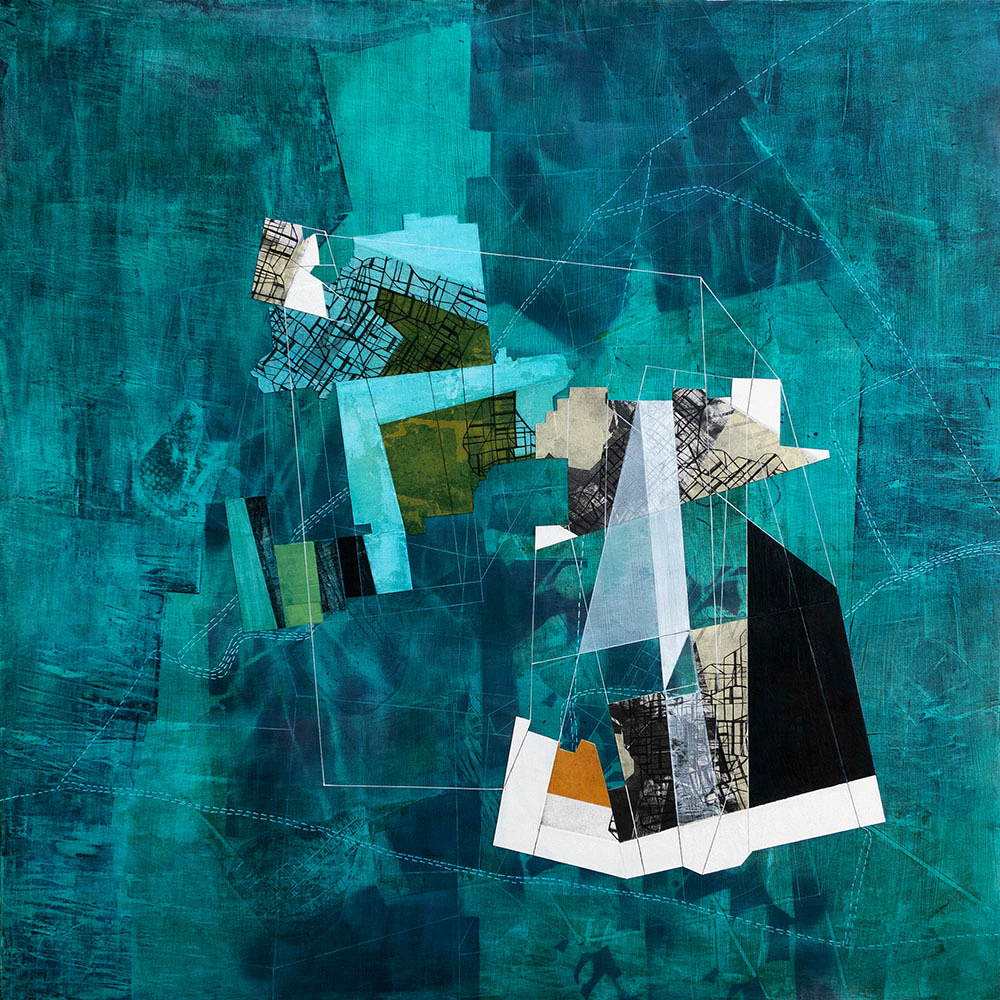 Most of these pieces are on custom-made wooden panels, with a rich pale sanded birch-like grain; a set of them are on thick, immaculate and creamy-white paper, framed in ebony-black frames, behind glass. A stitching motif runs through many; in some, the stitches are drawn or painted; in others, the stitching is by hand, by the artist, with real thread.

Two large works in particular stand out, because of color: one because of its rich ultra-aquamarine-ness (“Begin with Existing Surfaces”) — in contrast to Brown’s more ubiquitous denimy blue, which permeates most of the work, either as a denim-blue sky background or as an almost oceanic surge of darker denim blue, as in “To Mark a Boundary.” 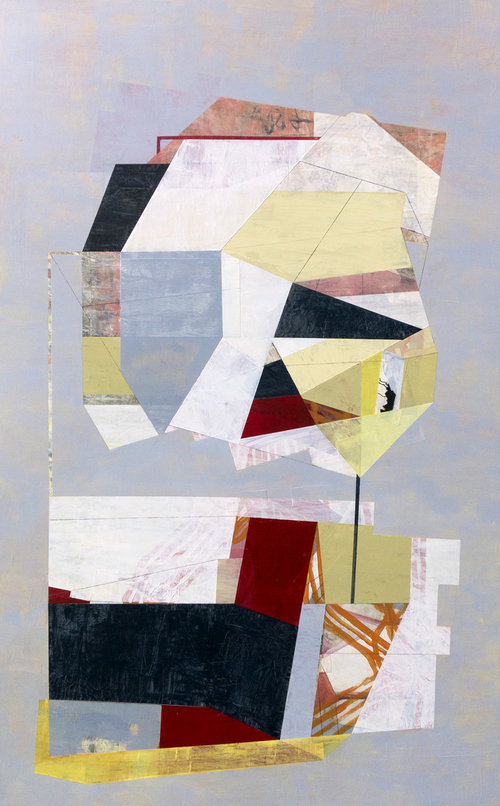 The other color-outstanding large piece, “Not Structurally Sound,” is one of the very few with red: this red of such clearness and signaling quality you immediately think of flags. Flags, with their almost childish simplicity of shape and color, simple to recognize clearly at a distance, are surely, at least at first glance, considerably simpler than Brown’s paintings. Yet, deep down, flags are complex: they super-contain opposing currents: backward and forward patterns of arguments and histories and future hopes: all happening in the actual puzzle-piece land-pattern each owns.

At last, this painting with red, suggesting flags’ reds, solves it; Linnie Brown’s paintings are perhaps equally about past and future projects. As in a flag, in Brown’s paintings, there are crosscurrents, of both future and past, histories in progress and projects going forward: dying and living and remembering, clothes and fabric and the buildings and ships, countries and flags — all a project, all the same.

Tagged as: "A" Gallery, Linnie Brown