Resistance, Memory, and Play at SUMA 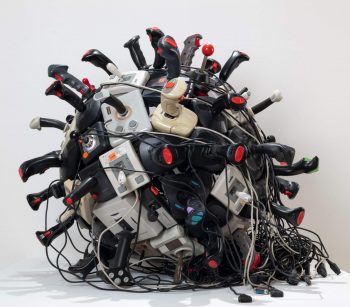 Resistance, Memory, and Play highlights the work of Joseph DeLappe, who has been working with electronic and new media since 1983. He has exhibited his artwork, which includes online gaming performances and sculpture, in Australia, the United Kingdom, China, Germany, Spain, Belgium, the Netherlands, Mexico, Italy, Peru, Sweden, and Canada. A recipient of the 2017 Guggenheim Fellowship, DeLappe’s work examines relationships between art, technology, and social issues. Through multimedia, including video games, paintings, and sculpture, he confronts audiences with his perspective on relevant current issues, such as gun violence, drone warfare, and the complicated relationship between humans and technology.

Previously on display at the Fred Jones Jr. Museum of Art at the University of Oklahoma, this exhibition will open at SUMA in October 2022. Special thanks to Pete Froslie, Dr. Robert Bailey, Thomas Smith, and Brad Stevens for their help organizing this second iteration of the exhibition.