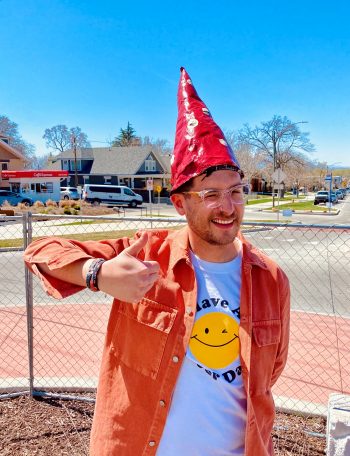 Renato Olmedo-González is a proud queer immigrant who is passionate about the arts and social change. Born and raised in Guadalajara, México, Renato came to the United States as an undocumented immigrant when he was 15 years old. While still a student at the University of Utah, he began his professional career with Artes de México en Utah and Mestizo Institute of Culture and Arts, where he created community-based art projects throughout the state, in addition to curating more than a dozen visual art exhibitions exploring issues of race, gender, personal identity, and cultural citizenship.

Shortly after receiving his green card and earning dual bachelor’s degrees in art history and Latin American studies, Renato joined the Consulate of Mexico in Salt Lake City as Head of the Community Affairs Department. In this role, he implemented community-based initiatives designed to empower Latinx immigrant populations throughout Utah and western Wyoming. Renato returned to the arts and cultural field when he joined the Utah Museum of Fine Arts (UMFA) as Manager of Annual Giving. At the UMFA, he led the Museum’s annual fund efforts, managed key relationships with a diverse portfolio of individual donors, and oversaw the UMFA Art Lovers, the Museum’s signature society for individual annual giving. Currently, Renato serves as the Public Art Program Manager for the Salt Lake City Arts Council. In this role, Renato is lead curator for public art projects located throughout Salt Lake City and his responsibilities include managing and implementing all aspects of the City’s Percent-for-Art Program.

Keeping up with Out of the Blue on Twitter via @LuluTheWhale and @9thand9thWhale, Luisgé Martín’s Cien noches, lots and lots of artist commission contracts, Luis Castañeda’s Spectacular Mexico: Design, Propaganda, and the 1968 Olympics, a manuscript of a chapter my friend Alonso Reyna-Rivarola recently wrote on being queer, Latino, and undocumented in student affairs, Mariana Enríquez’s Los peligros de fumar en la cama, and whatever my friend Ricky Cheney recommends. 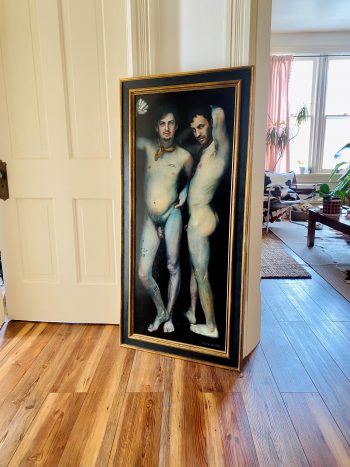 I wish I owned a house and I wished this house I owned had a mantle. But I am currently figuring out where to place “FULL HOG ACCESS,” an incredible self-portrait I recently acquired by local artists (and cutest friends!) Tucker White and Jason Dickerson. It would look very good above a mantel. “FULL HOG ACCESS,” is as much a conceptual work as it is a painting as it was a performance. Back in the fall of 2020, not long after finishing their piece, the artists organized a full access event for the unveiling of their hogs in which I had the honor of offering a critique in front of a small, intimate audience. My interpretation of their 🍆’s was rooted in Leo Steinberg’s The Sexuality of Christ in Renaissance Art and in Modern Oblivion, which acknowledges Christ’s own 🍆 as its central thesis.

Another object I’d place above my pretend mantel is my boyfriend Andy’s “Le Papillon Barbie,” a 1999 limited-edition of the iconic doll designed by none other than Bob Mackie, who is best known amongst us queers for his flamboyant creations for Cher. He’s kind of like the inventor of the image of the bedazzled pop diva we the gays flock to. Anyways, although Andy mostly collects Bratz dolls, “Le Papillon Barbie” may as well be the final boss of the collection. She would look wonderful above this pretend mantel.

Is there a piece of art in your house growing up that sticks in your mind?

There is one piece from my grandparent’s house that I always looked forward to seeing while growing up. It is a poster advertising a corrida featuring my grandpa’s name in it, as if he were one of the bullfighters. Don Toño loved bullfighting, so I grew up thinking he had once been in a corrida, as a pro, and this was the poster to prove it. Besides thinking it was cool to have a bullfighter grandpa, I was captivated by the exuberance of the bullfighter within the image and—✨🏳️‍🌈naturally🏳️‍🌈✨—the campy outfit. Years later, as a grown up, I found out how my Papá Toño’s name ended up on the poster: it was a gift from one of his good friends who had recently traveled to Spain. When I visited Madrid as an adult, I noticed similar types of customized posters being sold to tourists outside Plaza Mayor. After my Papá Toño passed away, my dad (after I got my grandma’s blessing, of course) let me take the poster back to the U.S. with me. It now hangs near my entrance.

If you could choose one person to paint or sculpt your portrait who would it be?

Juan Soriano during the period in which he became romantically involved with Diego de Mesa. I love the portraits he made during this time. 💔

What is the most memorable exhibit/performance you’ve seen recently?

My answer to this question is more related to being in a performance rather than seeing one. I recently participated in Jorge Rojas’s Wish you were here, a piece he did for the Salt Lake City Public Library’s 9th Annual Performance Art Festival, and it was a joyful, ecstatic experience. However, being part of tether, a more somber performance he did in December 2020 for The Immigrant Artist Biennial, was incredibly memorable to me. Jorge’s tether beautifully captures the complicated emotions that stem from the immigrant experience — something deeply personal to all the performers who were part of the piece. I consider Jorge a dear mentor and friend of mine and I am, above all, one of the most ardent admirers of his performance work.

What is the last artistic thing you created yourself?

Does bringing Out of the Blue to a roundabout near you count? 🔥🐋🔥

This is our chance to check in with members of Utah’s art community to see what they’ve been reading, seeing, doing.