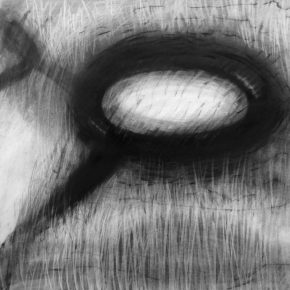 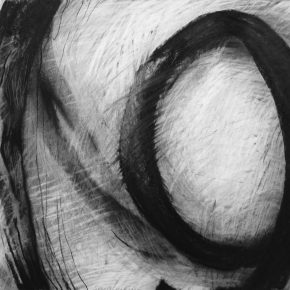 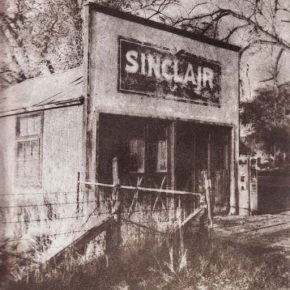 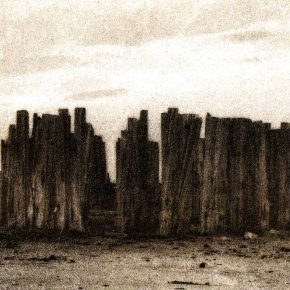 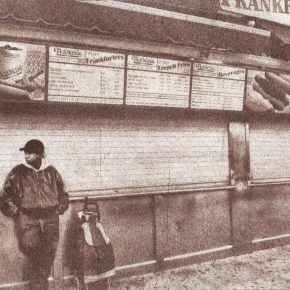 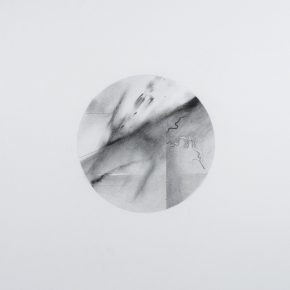 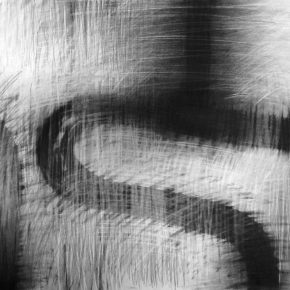 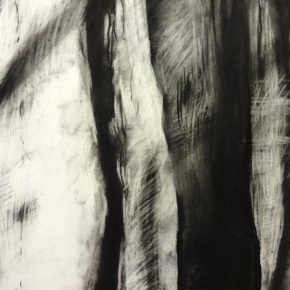 Group shows often come about when several like-minded artists approach a gallery and propose one. Or a commercial gallery may decide to hang several members of its stable they feel might appeal to each other’s enthusiasts. The staff of Finch Lane, on the other hand, has an admirable strategy of creating what might be called meta-group shows, by selecting exhibits for their three galleries that resonate with one another. In Remapping the Natural World in Black and White, not only do the three artists chosen by curator Kandace Steadman—Elise LaJeunesse, Nancy Steele-Makasci, and Matt Kruback—form a thought-provoking cross section of contemporary strategies for image-making, but they resonate with the contrasting works of Jena Schmidt in the adjoining room.

Probably the most familiar of the three is Elise LaJeunesse, whose bromoil photographs are related to hand-tinted photos, yet visually and conceptually at odds with them. Rooted in the academic technique of modeling light and shade monochromatically (known as grisaille), then overlaying transparent glazes to add color, tinted photos emerged in the 19th century, when most photography was otherwise limited to black and white. Hand-tinters kept the original photographic print, with all its sharp detail, but overlaid color much like Ted Turner’s computer colorizing of black-and-white movies. Once color photography became available in the 20th century, hand tinting largely disappeared, until it was revived near the end of the century as an artistic medium.

In LaJeunesse’s bromoils, on the other hand, silver is extracted from the original print by bleaching then manually replaced with lithographic ink. Detail is softened but monochromatic tonality is preserved, in an antique look that proclaims its reliance on traditional manual skills. Through careful selection of her subjects, LaJeunesse aligns subject matter and technique to produce new images that sensually evoke vintage photographs. To complete the nostalgic effect, she exhibits the finished, unique images in salvaged antique frames. This results in a kind of ‘stealth art’ one can imagine hanging alone or among other works in a home or office, easily misread as a collectable photograph, when in reality it’s a complex time machine: a 2-D Tardis tardis that’s a lot bigger on the inside of the frame than it is outside. Whether it’s the “Ruins of St. Mary’s” or “Winchester Cathedral Nave,” one an authentic medieval ruin and the other a still-functioning church, we see them as they are today but projected back more than a century, to the late Romanticism of Frederick Evans, whose images of similar subjects in England and France showed the potential of photographs to determine how we see something. Parallel American subjects, like the “Criterion Dance Hall and Saloon,” or “Barber – C Hoffman, Proprietor,” offer anything but simple experiences about the interpenetration of past and future as seen from the present. In the best examples, here including “Great Salt Lake Oil Jetty,” which calls to mind much older structures, such as the Neolithic Stonehenge, the visual analogues are as rich as any in art.

In use, the camera works like those composing frames en plein air painters use to preview a possible subject: it slices the world into fragmentary views. Its invention transformed painting by encouraging the likes of Edgar Degas to replace paintings that looked like stage settings with ones that implied and imagined what lay outside their frames. Nancy Steele-Makasci is to Degas what Elise LaJeunesse is to Frederick Evans; her abstract symbols that evoke numerals or circuit boards or maps—diagrams of some sort, anyway—have been further abstracted by being cut out of larger patterns as if to forestall recognition. This documentary effect may go down either to the impact of another group of photographers—Walker Evans among them, who shot old posters in the act of peeling apart, thereby simultaneously presenting and withholding their contents—or to Steele-Makasci’s willingness to stop inventing at the edge of the image, leaving her as much in the dark about what lies beyond as her viewers. True or not, that impression has everything to do with how the drawings create analogies to our experience: that feeling we all have of being expected to proceed on the basis of incomplete data, or the frustration of coming to the edge of the map and wondering what lies beyond, in a real world that neither folds nor has borders.

Close up, Steele-Makasci’s drawings undergo shifts as significant as the moment when a historical scene or portrait dissolves into so much paint pushed around on a wall. First of all, her elaborate working of its surface turns each seemingly hard-edged design into a cloud of values, undermining not only certainty as to which is figure, which ground, but asking whether any distinction can be made. Thus she implicates nature, a physical reality rather than an ideal image, wherein a living thing cannot be separated from its environment. Important work can then be done by the titles: “Arborescent,” “Thicket,” two drawings of trees labeled “Single” and “Pair”: these in turn alert the viewer to unexpected implications of “Ancestor,” “Character,” “Dialogue,” and “Nidus” (a site of origin like a nest, or a focus of infection). We’ve at least one foot back in nature after all, with both the scale of viewing and the artist’s intention become critical. Late in his life—before, if the latest evidence is correct, he was murdered by an avant-garde teenage gang—Vincent van Gogh became obsessed with analogizing the cellular composition of his subjects in the texture of his marks. Nancy Steele-Makasci has something similar going on in the ambiguity between the role of her marks in building an independent impression and what those scribbles suggest.

Among many, but still a finite number of means of production, the raw material for images can be clipped from the visual world with a camera, massaged from the imagination with a pencil, or generated from memory in response to a challenge, like an empty circle in the center of a blank page. The circle, which Matt Kruback employs frequently in colorful painted capsules of sublime nature, is more challenging than it may seem initially. First of all, the silhouette compresses whatever is placed inside, creating a sense of drama the actual work may fail to live up to. Then there is the ancient prejudice that the circle itself presents too perfectly, without orientation and so intrinsically boring. Even with great painters, their tondos are listed among their minor works. Yet for Kruback, who self-consciously seeks to close the rift between the central role of nature and the distracting, centrifugal impact of culture, the circle performs both symbolic and structural functions. Standing alternately for the self, for core values, or for the essential source of knowledge, the circle forms a gateway, perhaps most distinctively in full-color paintings that seem viewed through a window. But at Finch Lane, graphite and charcoal assault fully half of the circumferences, turning the surrounding membrane into space and what lies behind into a spherical surface. Compare “Projection A & B,” wherein crosshairs and plotted lines float near the surface, while contours and membranes retire into the imaginary distance, with “Projection E,” a beveled disk that rises in its own mist to hover against gravity. In “Projection D” or “Projection G,” even more complex events recommend themselves. The journey from specific citation toward generalized reference opens possibilities that leave viewers searching their memories for the precise antecedents encountered here.

One of the key questions art plays with at the present moment can be implied to the five-word phrase it is and it isn’t. Most traditional works of art unambiguously intend viewers to see just what they pretend to be: a visage, a human figure, a moment from life. Kandace Steadman pulled three artists from Finch Lane’s slush pile, the stack of proposals every gallery (like every publisher, whence the term is borrowed) draws from, and juxtaposed them to call attention to three relatively new forms of this ambiguity. How can a photograph not be contemporaneous with its subject? Isn’t that the very essence of its reality? How close do you need to get to plants before what distinguishes them from numerical models evaporates? And since when do the manipulations performed by artists diminish the closer the eye approaches? Like a substantial proportion of Utah artists, these three show that neither the natural world, nor the eye that contemplates them, has yet been exhausted.