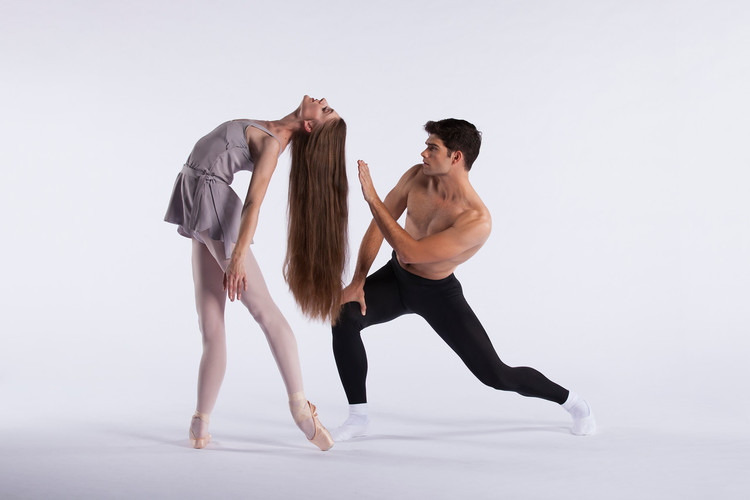 While introducing “The Nijinsky Revolution,” Ballet West artistic director Adam Sklute recalled the riotous shock with which much of Vaslav Nijinksy’s work was met. Sklute described the boundary-pushing nature of Nijinsky’s movement and libretti, inviting the modern audience seated in the Capitol Theater on opening night to see if they, like their historical counterparts, are scandalized by the three ballets offered. Jerome Robbins’ Afternoon of a Faun, Helen Pickett’s Games and Nicolo Fonte’s The Rite of Spring are reimaginings of three of Nijinsky’s four choreographic works. They are presented as contemporary continuations of Nijinsky’s ideas. It seems appropriate to view them in that context, albeit with varying degrees of success. Robbins’ Afternoon of a Faun is a masterpiece in its own right and Pickett’s Games is an energetic rendition of one of Nijinsky’s lesser-known ballets, simultaneously dense and flippant. Fonte’s The Rite of Spring, however, misses the mark having little of the revolutionary zeal found in Stravinsky’s still shocking masterpiece.

As the first languid notes of Debussy’s score, beautifully conducted by Jared Oaks, drift through the theater, the curtain opens onto a hazy, sunlit scrim, beckoning the audience into a dream world inhabited solely by two dancers and their elusive courting ritual. Robbins is a master at creating a world on the stage and Afternoon of a Faun is no exception. The entire ballet takes place in a bright, softly illuminated studio against a sky-blue backdrop. The audience voyeuristically occupies the place of the studio’s mirror. Throughout this short poem of a work, the gazes of the dancers are constantly directed toward that mirror, piquing the audience’s curiosity without inviting them in. This outward gaze directly contrasts the Nijinsky original, which echoes a Grecian frieze in its two dimensionality and stillness.  As Adrian Fry and Emily Adams look out toward the audience with subtle curiosity, boredom, vanity, and shyness, the audience grows more deeply interested in the dancers’ exploration of each other and themselves and the unspoken rituals of courtship they are enacting through ballet’s familiar forms. Adams and Fry cautiously approach one another, Fry mesmerized by the quietly bold Adams. I relished Adams’ glamorous and confident interpretation of the female character. Nijinsky’s Faun featured nymphs that spend the majority of their time running away in fear and modesty; Adams, however, directs the scene, drawing the eyes of the faun as she sensuously combs her dark hair and luxuriously extends her limbs as if basking in the warmth of afternoon sun. As Adams’ withdraws from the gossamer studio leaving Fry to recline in reverie, you wonder if the sweet, dreamy interaction was even real.

Robbins’ purposeful choreographic contrasts to Nijinsky’s Faun and occasional references to the iconic movement were particularly satisfying. A flexed wrist and pointed hand, picturesque moments of suspended pause, the dripping veil of Adams’ hair and Fry’s mystified fixation upon it. Of the evening’s three works, Robbins’ Afternoon of a Faun is most successful at reaching beyond the revolutionary ideas of Nijinsky precisely because it has a solid and full understanding of the original.

The second piece, Helen Pickett’s Games, opens with dancers Allison DeBona, Arolyn Williams, and Christopher Ruud standing isolated in pools of light against the hint of an urban office building. This is the last moment of pause before the nonstop energy and exertion of the dancers’ flirtatious romp begins. Throughout, the dancing is quick-witted and sharp. Each dancer engages the other two with a solo that can’t decide if it is trying to entice one or the other or neither. DeBona’s biting sparkle was a delicious counterpoint to Williams’ bright and enchanting girlishness, an especially seductive combination.  The score— another by Debussy—and the dancing are incredibly dense, changing tempo and theme almost constantly without ever letting up energetically.

Nijinsky’s original, entitled Jeux, used the trappings of a tennis game to explore a romantic tryst between a triad of dancers, two women and one man.  Pickett does away with the sports metaphor, placing the story in a modern-day office.  Cautions against office romance (especially office threesomes) aside, the removal of the tennis metaphor doesn’t serve the ballet: though the sexual draw among the three dancers is more openly acknowledged, it is not more openly expressed, save a few kisses near the end.  The action of the ballet hints at scandalous behavior without ever fully exploring or displaying either the behavior or its consequences. Largely light and playful, it is largely devoid of actual game-playing. The dancers flirted and giggled but exhibited no jealousy or any other ill feeling, guaranteed emotions in such a romantic arrangement. Games is short, however; perhaps it would have been too much to fully explore the emotional landscape of polyamory in its brisk 20 minutes. Or maybe that’s reading too much into an unusual but frivolous one-night stand.

The opening oboe solo of The Rite of Spring is undoubtedly iconic. It signals the beginning of one of the most revolutionary musical scores of the 20th century, one which caused a near-riot at its premiere in 1913 and continues to challenge audiences today. Instruments pierce through wild discordance, blossoming into musical themes that are equal parts unsettling and captivating. Rhythms and harmonies interweave into a chaotic system that seems incomprehensible.  Stravinsky’s score is a celebration of creation and the inescapable destruction that accompanies it, a hymn to the bloody, violent, cyclical process of artistic birth. In Nicolo Fonte’s interpretation of this musical masterpiece, the stage is dominated by rusted metal monoliths and spider-like dancers clad in black leather and rhinestone leotards. There is little of messy spring in the scenery, much less the choreography. Fonte’s interpretation is menacing and fierce like the score but it does not sweep you up. The ballet is filled with hyperextended legs, arched backs, splayed ribs and hands. There are unclear references to a narrative but little investment in its development. However, there is a pervasive sense of something being at stake—though it’s not clear what. Though the choreography is uneventful, the dancers perform it beautifully. They are sinewy and sensual in acrobatic twists and contortions, lending the movement intensity with their arresting gaze. But one wishes they had been given something more substantial to work with.