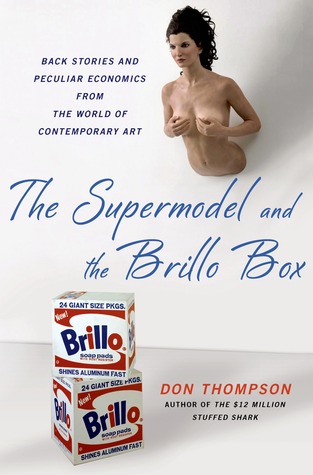 Suggestively titled critical studies of contemporary art, books like Thomas McEvilley’s Art and Discontent, Donald Kuspit’s The End of Art, and Dave Hickey’s Air Guitar, to name just three, share in common the implication that all is not well in the world of art and they are about to spill the beans. But criticism in the twenty-first century is part of the gargantuan promotional mechanism that supports the art market regardless its content, and no matter what the title promises, no ambitious critic can afford to bite the hand that controls access to the wealthy celebrities at the top. Art Danto’s title, The Transfiguration of the Commonplace, could describe the job of the critic as well as what Danto thinks art actually does, for if the artist transfigures leaden matter into aesthetic gold, the critic’s job is to make even the most mundane art, untested by the judgment of time, somehow seem worth the billions of dollars it brings in annually in auctions and art fairs around the world. When he announced his recent retirement, Dave Hickey hastened to point out that he wasn’t leaving on account of disenchantment; in fact, he gushed, there is so much great art out there he hates to walk away from it. In the face of such pulled punches, one longs for the late Robert Hughes, whose Nothing If Not Critical and earlier The Shock of the New argued at the end of the 20th century that the emperor can be both emperor and naked at the same time. Here, then, for those who might wish to see Hughes’ skeptical vision brought up to date, are two recent authors who, while clearly caring about the state of art, still manage to view it with a gimlet eye.

The odds are that few art enthusiasts will dive into Don Thompson’s The Supermodel and the Brillo Box: Back Stories and Peculiar Economics From the World of Contemporary Art, which limits its primary focus to ‘the world of the top 1 percent—and in most cases, the one-hundredth of 1 percent’ of the art market. Thompson promises “themes that swirl around the top of the art market: about collectors, artists, auction houses and dealers, and prices” — a list that conspicuously omits the only polarity that a lot of us would argue really matters in art: the work of art and its audience. Yet an argument can be made that few with an interest in contemporary art can completely resist being influenced by what happens in the rarefied domain of New York and London auction houses. After all, we were all raised on stories of reactionary resistance to new art, and who wants to be the present-day incarnation of historical opposition to the future of human awareness? To such fears, however, Thompson is positioned to offer some reassurance:

In thinking about prices, remember that the operative part of the word contemporary is “temporary.” Half the galleries advertising in a 15-year-old copy of Artforum are no longer around. Three quarters of the artists mentioned in the magazine are no longer represented in a mainstream gallery. Of the thousand artists who had serious gallery shows in New York and London during the 1990s, no more than 25 were offered in evening auctions at Christie’s or Sotheby’s in 2013. Half the artists offered in these evening sales in the 1990s no longer appear in their current evening sales. Half the works purchased at auction in 2013 will likely never again resell at their hammer price.

Furthermore, The Supermodel and the Brillo Box is one of the more informed, as opposed to merely opinionated, books on present-day contemporary art (defined here as art made since 1970). That Thompson confines himself to the facts does not prevent the marshaling of all that information from building a revealing, if self-evident, argument against the claim that there is any continuity, or even resemblance, between the art market of today and the historical processes by which art works achieved notoriety. Thompson’s introductory remark, that “beautiful or not, the central characteristic of twenty-first-century contemporary art is that traditional artist skills of composition and coloration have become secondary . . .” may sound obvious and unremarkable, but when he goes on: “. . . to originality, innovation, and shock—however achieved,” his quiet, detached observation suggests an antagonism between aesthetics and sensation few critics would comfortably draw. Sometimes all it takes to restore a sense of balance to the discourse is to tone down the rhetoric. Or the sales pitch. 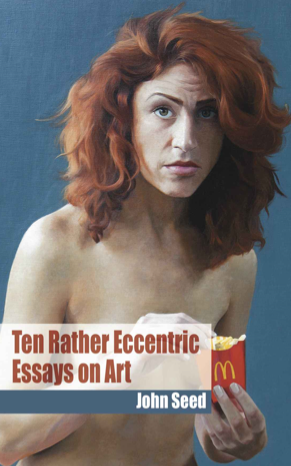 The one theoretically reliable place worth looking for criticism that keeps its promise to ask tough questions is online. Of course the dilemma of supply-and-demand in the information age still applies: there are seemingly limitless worthless opinions to be sorted through on the way to the good stuff. Fortunately, the Huffington Post has done the hard work of locating and promoting John Seed, a painter, curator, and professor of art and art history at Mt. San Jacinto College in Southern California, whose appearances on the Huffington site potentially redirect readers to his website: http://www.johnseed.com. They also promote his timely, if paradoxical experiment in information age commercialism: Ten Rather Eccentric Essays on Art: Reflections on Damien Hirst, postmodernism, the art market, food in art and more . . . , which reprints essays already available for free from at least two archives, in a slender volume available in print or digital form for purchase by those who want a hard copy or just believe that a large enough number of small contributions can keep worthwhile reading matter coming.

As for what matters—the writing—Seed alternates the succinct, compressed, and evocative prose of the best arts writers with straight, first-person journalism intended to demystify the art and make participation in the contemporary scene less intimidating. In this, his blog resembles what 15 Bytes strives to present. As for substance, he clearly spends a lot of his time looking at art that is accessible to everyone, which he generally strives to connect with worthwhile efforts by big names he feels are doing good work in spite of their star status. An example that should make sense in Utah came about in response to the latest work of a would-be star whose efforts include streaking — yes, that still means running naked through — other artists’ exhibitions while having himself videotaped:

OK, that looks like a lot of fun but it got me thinking about a paradox. MOCA has now become a place where you just might see a live naked person but it is very unlikely that you might see a painting of a naked person there, especially one executed with real skill. Marina Abramovic’s live human centerpieces have been seen there . . . but Odd Nerdrum’s masterful paintings of human figures have not.

Since it opened in 1983 MOCA has certainly shown representational paintings — Suzanne Caporeal had a nice mini-show in the summer of 1985 — but an invisible art world line has screened out whole genres of painting, most notably realism and other approaches that have their foundations in skillful drawing and rendering. In true country club style MOCA’s curators must have been quietly rationalizing this exclusion:“The other museums can show those artists…and they aren’t contemporary…” In the comments at the end of this blog would someone please explain to me why, for example, a great living realist like Antonio López García can’t be shown in a contemporary museum?

There are many advantages for a writer like Seed, who apparently can afford to give his words away, and most of them apply equally to his readers. Not only are his essays readily available for free, but archiving them means that a reference in one to another can be followed up immediately: an advantage not available to one of Don Thompson’s readers who becomes curious about his previous book, The $12 Million Stuffed Shark. One virtue of online publication that is still evolving makes a quantum leap on Seed’s blog. Illustrations are expensive, and a book like The Supermodel and the Brillo Box is likely to send readers to Google or risk leaving them unsatisfied. On Seed’s blog, by comparison, a number of posted illustrations are backed by links to hundreds more: to entire web pages on the artists he discusses.

Of course some readers will already have made a choice. Thompson is an economist, not an art critic, and for many Seed’s sensitive feel for the nuances of contemporary art will carry the day. But the corresponding virtues of the economists take should not be so quickly dismissed. He is also a member of the art audience, with as much right to an opinion as any human being, and arguably better informed. In an anecdote comparing art and artists to dogs and cats, and in any number of peculiarly alert comments on specific works by specific artists, he shows that sometimes the economist knows not only the price of everything, but its value, too.