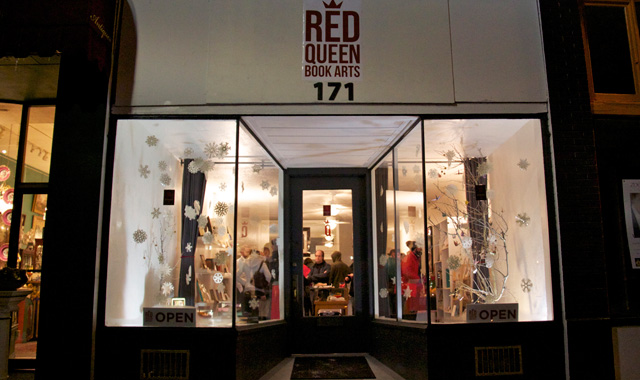 Throughout history, advancements in technology have brought about significant changes for the book. In the 15th century the printing presses began making the written word available to the masses and today a person can tote around an entire library on a Kindle. The full impact of the information age on the book has yet to be seen, and forums like the Massachusetts Institute of Technology’s (MIT) 2012 symposium “Unbound: Speculations on the Future of the Book” demonstrate that even some of the greatest minds can only speculate about the future of books. While many are predicting the disappearance of books as we know them, other people see arrival of the ebook as an opportunity. Melissa Sanders, owner of Red Queen Book Arts, the first book arts gallery in Salt Lake City, sees an analogy to the arrival of photography. “Photography came along and freed painting from the need to be representational.” Electronic books are having a similar effect on books she believes, and “the result, to me, is all of this playful stuff we have going on in the artist’s book world.”

Visitors who step through the door of Red Queen Book Arts, which held its grand opening on January 19, will find themselves in a showroom of creative work that may illustrate the future of books: books as art. Sanders is drawn to the art form, in part, because of its ability to pose questions to the viewer and challenge him or her to redefine exactly what a book is. “You talk to someone and ask, ‘What’s an artist’s book or what are the book arts?’ and you’re going to get individual answers from everyone, which I love. It’s kind of like a Venn diagram where everybody falls a little differently where their overlaps are. Is it a book if it doesn’t have pages but it does have text? — I have a scroll snake book over there; I would call that a book but maybe somebody else wouldn’t –versus what if it has pages but no text, is that a book?” Sanders asks.

The scroll snake book by Sara Press is a paper snake coiled inside an egg. After opening the egg and lifting the snake out, one reads text on spirals of paper. “There is a current evolutionary theory that one of the reasons we have such good peripheral vision is because we coevolved with lethal threats like snakes. This book is meant to bring that up as a theory and both visually and viscerally suggest maybe that’s true,” Sanders says. Another example of a book that challenges traditional form is I, Robot. The small piece could be mistaken for a child’s action figure, when its message is actually more profound. An accordion of pages can be pulled gently from the robot’s back, and an origin story is told. “It’s a little book explaining that, with all due respect to Isaac Asimov who wrote the three laws of robotics and became pretty well known for that, the guy who coined the term robot was actually a Czech man named Karel Čapek.”

Sanders first came across I, Robot at the Seattle Book Fair in 2007 when the Miniature Book Society of America’s meeting coincided with the annual fair. She was charmed by the piece, which was one of the catalysts for her love of art books. The daughter of renowned antiquarian book dealer Ken Sanders, she discovered her general love of books at a much younger age.

“My dad used to take us in to Utah Book and Magazine on Main Street. We would wander the stacks and he would buy us any used books. We’d both come home with not just a bag of books, but one or two paper grocery bags full of books,” she says. When Sanders was a teenager, her father asked her to help him at book fairs where he would sell and acquire antiquarian books. She traveled the country and recalls seeing the first American edition of Charles Darwin’s famous work, “On the Origin of Species,” and viewing books signed by Albert Einstein. “That pretty much ruined me for any other kind of employment,” she says. Sanders worked for her father full-time, only taking enough time off to earn an English degree from University of California, Berkeley. As she became more interested in the book arts, she found herself wanting a unique space to display her finds. “I really wanted to be able to showcase them in the way I felt they deserved, and to spend more time with them,” Sanders says.

She has found a space for that showcase on Salt Lake’s Broadway, right around the corner from her father’s iconic shop. Her years of employment there didn’t entirely prepare her for the new venture. “I knew it would be mentally and physically exhausting but without the support that I had from my husband and my friends and relatives, I couldn’t have done it,” she says. But with a strong support network, she has been able to open the doors to Red Queen Book Arts. Her collection focuses on book arts from eras that she is particularly drawn to including Art Nouveau, Art Deco, and American Arts and Crafts.

Sanders also has a fondness for Lewis Carroll and several shelves are dedicated to work by or inspired by the famous author. “I’m a huge fan of illustrated books. I love that he has stayed so current in pop culture throughout the years.” She notes how many young people use phrases, like chortle, without knowing Carroll coined them. His words and the tales themselves remain compelling. “Because he’s captured so many people’s imaginations he’s been constantly visually reinterpreted, and the best of them bring something new to the story.”

Just as Carroll is constantly being reinterpreted, so is the role of the book and Red Queen Book Arts is open to show people a new chapter of possibilities. “My hope is that people walk away with maybe a little more knowledge of what book arts are and that they walk away realizing that the world of books is maybe a little wider than what they thought it was when they walked in. That’s exactly why we decided to have a showroom instead of an office with a locked door, because with this kind of material, no matter how many pictures you see of it, it’s so physical. And we really wanted people here locally to have that experience of being able to see these things. The other reason behind that is a lot of the books I have here are one-of-a-kind, or one of only 5 copies in the world, or the next closest copy is 3,000 miles away. It is important for me to be able to do that kind of education and outreach,” she says.

In the coming year, she hopes to educate people by bringing in work by local artists as well as a showcase of the tradition of papermaking. Sanders is also hoping to show the work of Jim Croft, a book artist who lives in Idaho. He makes his own paper, uses a stamp mill powered by the spring run off, and crafts book covers from the wood he takes off felled trees on his property. But even with the exotic displays, Sanders wants to stress that at her store she has something for everyone. The books at Red Queen sell for as little as $5 or for thousands of dollars. “I really like people to come here and meet the books. So I want to encourage people to come here and browse. Part of my mission here is education and outreach, so I’m not always trying to sell something; I just want to share what these books are about,” she says.

Perhaps one thing book art is about is not only a demonstration of how technology has shaped books, but also how books have defied technology. “When was the last time you tried to read a floppy disk on your computer? But if you went to the Marriott Library or BYU and asked to see a book from 1500, they have them and you can still read those,” Sanders says. While the Kindle may go the way of the 8-track tape, and experts at MIT can only venture guesses about the future, there is one certainty: in one form or another books will endure. 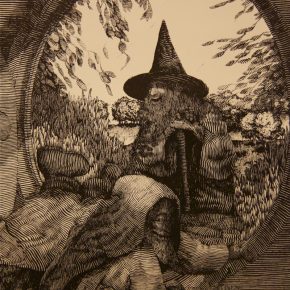 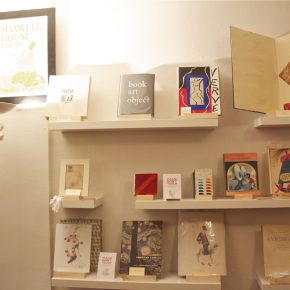 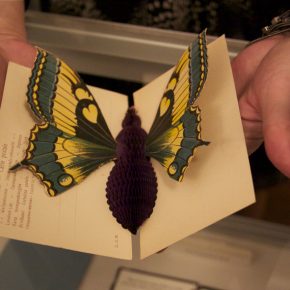 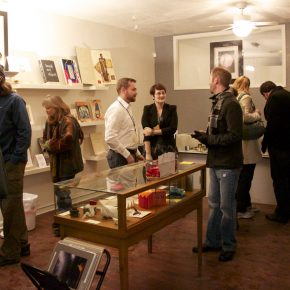 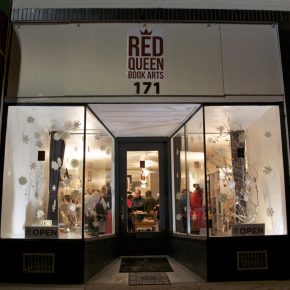 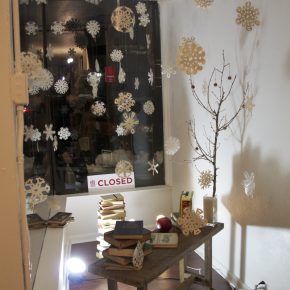 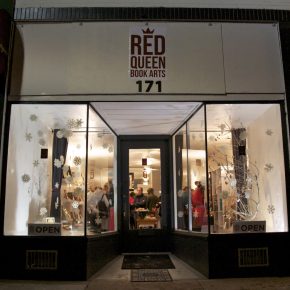 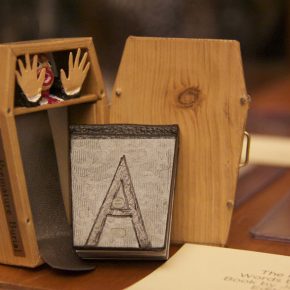 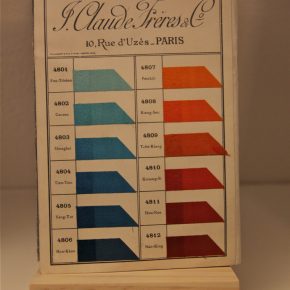 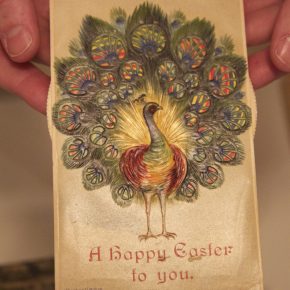 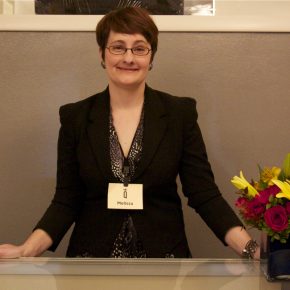 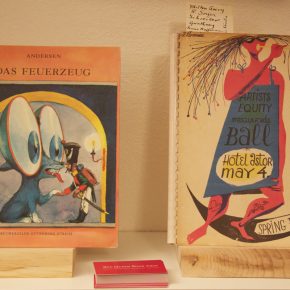