Red Desert Showcases the Future of Music at Westminster College 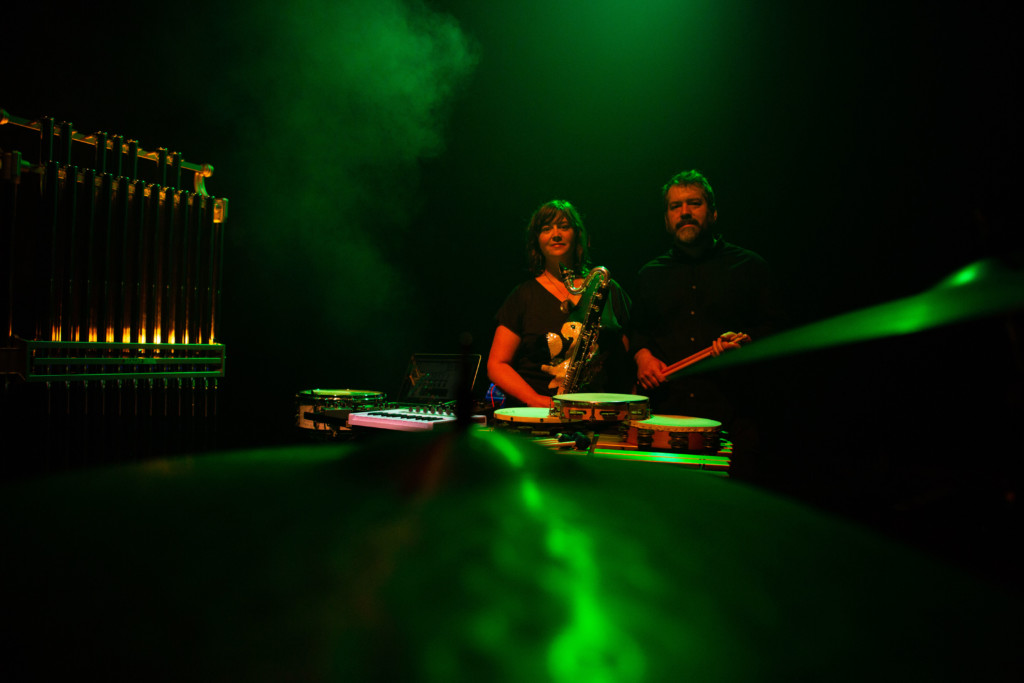 Fresh off of a tour around the American west, the New Music duo (and current Westminster College artists-in-residence) Red Desert Ensemble brought their set of (almost) brand-new commissions back to Salt Lake City for a night of exploratory, revelatory music. Future Music showcased the work of seven contemporary composers, with all but one piece (Tim Parkinson’s “Drum Piece” from 2011) coming from commissions made within the last year. In realizing these works, Katie Porter (clarinets) and Devin Maxwell (percussion and electronics) propped up a carnival of experimental approaches to composition. This portrait of music’s future eschewed cohesion and stylistic unity, instead shining in its breadth of vision and rejection of any form of musical convention.

Future Music began with Teodora Stepančić’s solo clarinet piece “Clarinet No.6 (*Katie).” The piece’s stillness jarred the room into a stupor, with Porter balancing held tones and multiphonics across tightropes of sound and tense gaps of silence. Porter’s control of her tone and dynamics kickstarted the night with a breathtaking blend of technical awe and musical profundity. Each note hung in the air well after its release, outlining a single melody over the course of its runtime. This musical patience froze time, drawing listeners’ focus away from reflecting on what’s passed or anticipating what’s to come. Instead, each tone formed a moment unto itself, resonant and stately.

Maxwell joined Porter on vibraphone for the following piece, J.P.A Falzone’s “Two-Body Problem.” Falzone’s composition pitted the duo against each other more than it melded their sounds — a chunk of the piece delivered lilting call-and-response figures, with the musicians performing a dense dance around each other that avoided overlap or collision. While never cohering to a strict rhythmic pattern, the mix of quasi-modal clarinet melodies and cheery vibraphone motifs did recall a distant connection to a sort of song-and-dance performance. Each member would step in or sit out at various points, passing by and acknowledging each other’s presence without ever crossing paths.

That piece’s titular reference to mechanics aside, Future Music did expose a shared interest in the physical and natural qualities of sound among these seven composers. The works shared a thread of exploiting phenomena such as beat frequencies and reverberation, as well as a focus on subtle, poignant deviations from the allure of pulse. Tim Parkinson’s “Drum Piece” embarked on an exhaustive exploration of the solo snare drum, showcasing this collective draw toward an instrument’s topographic timbral qualities. Maxwell pulled a long line of characters out of this series of technical exercises and auditory illusions: He lifted out the barely perceptible pitch differences throughout the drum head for a mini chorale, he toyed with the snare position and he pushed both extremes of the instrument’s dynamic range for moments of sonic novelty.

After this study in instrumental limits, Carolyn Chen’s “Whether the Fish Are Friendly” barreled through with all manner of rhythmic jokes, half-melodies and false starts. The piece’s overt humor and technical showmanship marked it against the patient music of the surrounding program. Much of the piece sprinted through a series of avant-slapstick gags and black-and-white contrasts, throwing in staggered added notes and a host of sound effects (xylophone sweeps and a number of clarinet utterances on either bookend of the instrument’s range) at every turn and roundabout.

After a brief intermission, Future Music’s second half opened with William Lang’s “A Song for a Desert.” Porter made her first of two switches to the bass clarinet, declaring herself and her new sound with rapid low-end growls. Countered by a driving, repeated-note melody on Maxwell’s vibraphone, this short piece bridged the absurdity of Chen’s “Whether the Fish are Friendly” with the program’s two concluding numbers. Maxwell’s own “Bonneville Park 3” paired Porter’s clarinet with a series of electronic harmonies. In part due to its monopoly on the heft of synthesized sounds, “Bonneville Park 3” stood out as one of the program’s singular moments of grandiosity. As Porter cycled through variations on a melodic lament, Maxwell’s harmonies swelled along and underneath her sound. The eventual introduction of a grounding bass tone led the piece toward a chrome-laden digital replication of religious ecstasy.

The concert concluded with an excerpt from André Cormier’s “Émeraude. Platine. Hémérocalles.” The full piece comprises twenty movements, each one representing one year that the composer has known the members of Red Desert. The duo performed four movements (“Tableau 2000–Tableau 2003”), with each exploring a variation on a single idea: tom pulses and singing clarinet melodies. The overall tone hovered around meditation and recollection, with Porter’s bass clarinet tunes filling the concert hall with a nostalgic sorrow. The sudden and subtle shifts in Maxwell’s speed, intensity and volume within movements provided a narrative companion to the melodies, a guide to the formal structures in each.

Red Desert’s Future Music appeared as a single being with seven heads, each one glimpsing ahead with a different tone and outlook on the next step in art: a soft-spoken poet with synesthetic tendencies (Stepančić); an exacting mathematician (Falzone); a brash athlete with a penchant for marksmanship and showmanship (Parkinson); a jester who forges humor through equal parts Fluxus and Tati (Chen); a breathless adolescent trying to breathe in as much as possible at once (Lang); a studied sound chemist (Maxwell); and an oral historian rewriting the past in light of what lies around the corner (Cormier). Which (if any) heads will wither or flourish is anyone’s guess, but each possible future represented here drew an optimistic roadmap down which any quantity of great music could thrive.