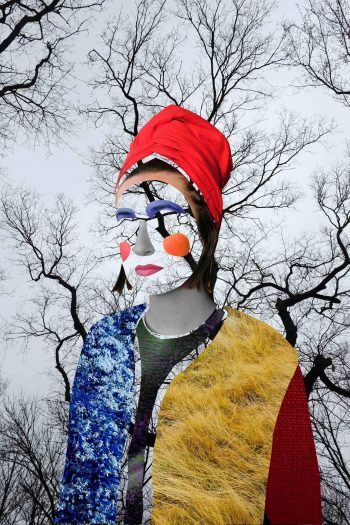 Reclaiming Agency: Ukrainian Women Photographers Today presents works by ten Ukrainian female photographers, who have all been active in the decades following Ukraine’s independence from the Soviet Union in 1991. During the Soviet period, photography was not approved by the communist regime as an official artistic medium. Although underground artists in Soviet Russia rarely worked with photography, a group working in Kharkiv, Ukraine utilized this medium exclusively. This collective, whose members were predominantly male, came to be known as the Kharkiv School of Photography. What these Soviet-era underground artistic milieus shared—both in Russia and Ukraine—was a scarcity of female artists and an absence of female photographers. In Ukraine, this situation continued beyond the Soviet period into the 21st century; it was only in the late 2000s that the number of women artist-photographers began to grow. More and more women have joined men in taking private courses in photography despite the continued dearth of university-level programs in the medium. This exhibition gives a platform to these groundbreaking voices and a new audience for their singular visions.

The work of the ten women photographers presented here, encompassing photographs as well as artist photobooks, displays an array of motivations, working practices, subject matter, and styles. A frequent motif that appears in these works is average people—their singular lives, complex identities, and relations with others. These portraits vary from poignant to humorous, but each reflects both a unique identity and a relatable humanity. Ukraine’s Soviet past and Russia’s present military aggression—extending from the 2014 annexation of Crimea to the ongoing invasion of the Ukrainian nation—surface in visual stories about people and their environments.

Although the cultural, political, and military conflicts of the past and present are conveyed in documentary or metaphorical ways by some of these women artists, these various upheavals have caused havoc in the lives of all of them. Amidst chaos and despair, photography has allowed these women to reclaim agency over the rich and diverse narratives of their lives, their communities, and their country. These photographs show their worlds as viewed through their unique lenses.