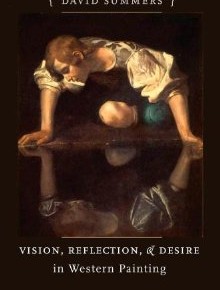 If the crass commercialism of the holiday season has you down, if the increasingly sophisticated and invasive methods of appealing to your innate narcissism as a means to convince you to purchase more gadgets and gizmos has you considering canceling Christmas next year, then you just might have Leon Battista Alberti to blame. Or so David Summers implies in his recently published book Vision, Reflection, & Desire in Western Painting

Summers, William R. Kenan Jr. Professor of Art History at the University of Virginia, contends that the study of optics that fascinated Alberti and his fellow painters of the Renaissance resulted in a seismic shift in the Western philosophical paradigm, the shock waves of which still resonate today. The study and use of optical devices, and the formulation of the geometry of reflection, Summers demonstrates in this book, placed an emphasis on the “point of view” of the individual. This inaugurated an era of subjectivity unique to Western culture. The concept of perspective and point of view developed by these artists has so permeated our culture that the original idea has “overflowed its cultural banks.” “Alberti could hardly have foreseen narcissism as a condition of Western modernity, as the psychological basis for effective strategies in the vast institutions of consumer societies, or as the diagnostic basis for the criticism of these same institutions,” Summers writes. “Still, whether or not we are psychoanalysts, we have a pretty good idea of what is meant, for example, when someone says we all live in a ‘culture of narcissism,’ and Alberti – and the new painting of point of view and personal expression he helped initiate – may be legitimately paced near the beginnings of this new historical reality.”

The title for Summer’s book, Vision, Reflection, & Desire in Western Painting, implying as it seems to a historical survey of artworks treating the three themes mentioned, is misleading. For Summers delineates his arguments not with the wide-angle view of a Flemish landscape painter, but through a narrowly focused lens, concentrating on a few key characters in very specific moments in Western art.

In the first of four chapters, Summers examines the beginning of naturalism in Western art as it developed in ancient Greece. The development of Greek naturalism, characterized by the abstract principles of defining “the visible in terms of light, dark, and color and the geometric economy of light,” coincided with the civilization’s interest in optics.

In the next chapters, Summers’ examination leaps forward almost two millennia, to the early Renaissance, when a renewed interest in Greek art was combined with new developments in optics. The unique conditions of the European artist in the early Renaissance allowed them to participate in what the author calls a “common specialist culture” so that an artist’s knowledge and interest spanned a variety of fields, including optics, geometry, cartography and chemistry.

Though Summers’ examination touches on a number of Renaissance artists and their relationship to the study of optics, he focuses his attention on Alberti and his Flemish contemporary, Jan van Eyck. Both, Summers contends, were part of this “common specialist culture,” and their interest in painting was part of a larger investigation ino optics. Alberti, a painter who also wrote a treatise on the art of painting, gave famous visual “demonstrations” which, through the use of mirrors and a stationary position, gave illusions of “cartographic scale.” Distance and light were so accurate that sailors were said to be able to determine the time of day and distance of a ship depicted in one of Alberti’s demonstrations. Alberti’s painting, according to Summers, with its emphasis on a unique point of view, becomes a metaphor for our own subjectivity.

Like Alberti, van Eyck had an interest in using the optical to map the real world. With the oil painting he was crucial in developing, the artist devised a style of landscape painting in which actual distances were considered to be decipherable from the painting itself. The translucency of oil paints allowed van Eyck to think in terms of the painting as a reflective surface, similar to a mirror. The emphasis on reflection became an emphasis on self-reflection and implied a point of view. Van Eyck created altarpieces in such a way that their installation were taken into consideration and the particular light revealed in the oil paints reflected the actual source of light of the cathedral niche they occupied.

Though northern (van Eyck) and Italian (Alberti) Renaissance painting might have arisen along different lines, Summers’ concludes that their common interest in reflection “absolutely locates or implies the location of a viewer. Both reflection and the geometry of reflection establish (or imply) point of view, and in this respect the two traditions are both close and early modern.”

This book originated in a series of Rand Lectures originally titled “Light in Western Painting from Antiquity to Cubism,” though, as the author notes in the Preface, the last lecture on the moderns fell by the wayside as “earlier art-historical issues demanded clarification and explanation.” Thankfully, the book provides images of almost all the works discussed by Summers so that references to these clarifications and explanations are quick at hand. Unfortunately, the majority of images are in black and white and frequently of inadequate size for clear verification. Summers’ prose is fluid, his insights into individual paintings fascinating, and his generous littering of anecdotal art-historical asides entertaining; but the book’s early incarnation as a series of lectures for specialists becomes evident when the relatively rapid read seems to shift gears and at times become mired in explanations of geometry and physics, or with the parsing out of all components of a scholarly argument in order to establish the author’s point.

Stripped of some of its technical discussions and art historical debates, this book would  serve well as the first few chapters of what could prove to be a fascinating cultural read of more general cultural interest and one that might prove more true to what is promised in the title. This larger volume is only hinted at in the book’s Afterword. After four chapters and 150 pages of carefully laying out his argument about the relation of optics to Western art, in a frustratingly short ten pages Summers touches on the historical importance of this relation. Summers contends that contrary to arguments currently in vogue that hold perspective to be an arbitrary Western representational code or an “ominous manifestation of modern instrumental reason and panopticism . . . painter’s perspective is a special case of the long tradition of geometric and physical optics,” and the basis for philosophical discussions of the subject that have evolved to our present day.   This argument, in the hands of such a perceptive and persuasive analyst would make, with a slight edit in the title, for a fascinating read: Vision, Reflection & Desire in Western Culture.

When you use the link above to purchase this book or other items at amazon.com you are helping to financially support this website.