Taking a Spin with Existentialism: The suggestive work of Rebecca Pletsch

The Alice Gallery opens Portrait as Narrative and Narrative as Portrait this month, an exhibit featuring three Utah artists, though visitors would be forgiven if they mistook it for the work of four. Rebecca Pletsch makes her impact felt in two distinct mediums, painterly oils and photographic collages. Full of opposing tensions – contradiction and agreement, aggression and harmony, rejection and embrace – the works nevertheless manage to galvanize into cohesive wholes. Her emotive paintings and narrative collages unearth tremendous meanderings of meaning, where the world of truth and the immensity and nature of reality are introduced as one and the same. This is thanks to the efforts of a very contemplative oeuvre that takes existentialism for a test drive and opens many doors, leaving the viewer bedazzled and amazed by the possibilities of existence.

Pletsch’s paintings are monochromatic, purposely stripped of one of painting’s more emotive qualities: color; yet they are expressive of tense emotional moments. These moments are revealed, in lush forms, but not explicated. In “Melancholy,” an angel painted in Baroque swirls places her left hand on her right bosom as if communing with her own soul. This might be seen as the aftermath of an experience like the one we witness in Bernini’s very baroque “the Ecstasy of Saint Teresa,” where the nun is pierced by the “pure love of God,” recoiling into her own being upon an intense experience of extravagant emotion. Ostensibly, this angel too has experienced something very powerful. She seems as if in an exhausted state, gathering an immensity of emotion into her core to find a calm and a peace. Yet this is all surmise, as we are left to write upon it our own narrative.

In “Penitent Angel in Black and White,” a second angel is captured in another pensive, ambiguous state. Her body is held tight, her teeth clenched, her eyes fixed in a gaze cast vacuously and slightly downward as if to avert all eyes from hers while at the same time revealing introspection. With eyes so mute and a body so poised, she brims with emotion. Is she perhaps experiencing a harsh reality check? The human mind, attuned to the slightest shifts in posture and facial gesture, and filled with the pathos of shared experience, yearns to unlock the story suggested by this figure.

We may find this human pursuit of understanding exemplified in a third painting. Here, a charming woman with a milky white complexion is seen in profile against a dark background. Her lips poised, her eyes shut and lowered with a somber air, her shoulders and neck bare, and her hair cropped in the “bob” of the painting’s title, she clumsily holds an assortment of roses. It seems as if she has just stepped from some trauma or has been overcome by some joy or life-altering event, and is using her utmost energy to remain stable and compose herself. The mind races with possible associations. Perhaps when given less the mind compensates with more.

The second half of Pletsch’s oeuvre is a body of collage works that share a monochromatic palette with the paintings, but their calmness and linear design make them strange companions to the artist’s emotive paintings. They appeal to the mind more than the heart, ask for logos rather than pathos for their interpretation. In contrast to the personal narratives of the paintings, Pletsch’s collages are germane to larger, more conceptually abstract ideas and ideals, with universal leanings.

“Over the River and Through the Woods” reads from left to right, and shows a calm countryside, perhaps in England. Atop this sits a transparent gray form, into which three windows have been cut. They call to mind a train carriage, an association further emphasized by what beneath it appears to be a train track and station. Contrasting this scene, to the right, in a brighter, sepia-tone, we see the fragment of an exotic image, camels with riders at a pool of water against one of the Great Pyramids at Giza. The images seem to be in stark contrast but also call to mind various associations – the colonial relationship between England and Egypt, for instance, or the drastic influence of industrialization and globalization – so forcefully symbolized by the train – on idyllic landscapes.

“Journey Through Night” is another collage of contrasts. In the center, the night scene of a great city, perhaps Chicago in the 1950s, is lit up by beams of light that shoot from every corner. It is flanked on either side by an image from a dramatically different place and time: on the left a wagon train crosses the plains, and on the right a rider on horseback appears to be observing the train as both pursue the American idea of Manifest Destiny. The value of the city and the effect on the natural landscape is an existential question left up to the individual.

“Two,” has a slightly different approach, more disorderly and less finished. A black and white magazine article has been smothered by several sheets of chalk-scrawled, coarse paper. Atop this sits the image of a cloud, and the torn piece of paper featuring a dove holding a scroll in its mouth that reads “be mine.” This intimate note is juxtaposed against the 1920s black and white images below that show masses of people with their backs to the viewers. Is the work about the difference between the intimacy of love and the anonymity of the crowd? Or does the magazine, suggesting time, call into question the Valentine, referring to the transience of love, fading from existence like the masses captured in the photographs?

While collage is perhaps the most commonly used artistic medium today, Pletsch’s work is not the general body of replicated imagery with standard visual appeal, but a sensitively pensive, inventively articulated, and abundantly intelligent, meaningful collage that is ripe with visual signifiers. They stimulate the human mind to create universal and relevant thoughts from scraps of waste paper.

Both Pletsch’s collages and her paintings explore the human ability and tendency to create meaning and structure. Whether exploring possible causes for deeply private realities, or suggesting larger, universal truths about society and history, they are testaments to the mind’s ability to connect, deduce and ponder, to the human need to create narratives of understanding. 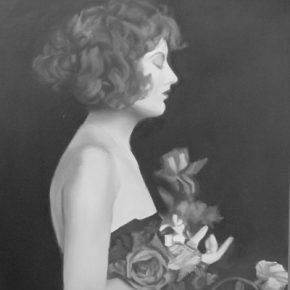 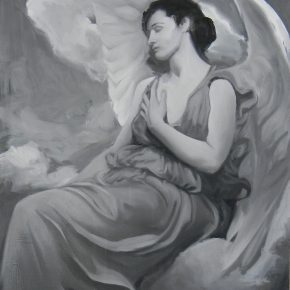 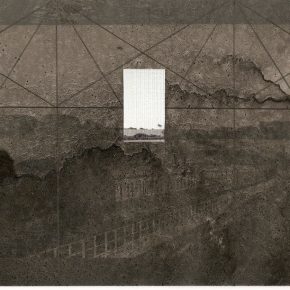 “Over the River and Through the Woods” collage 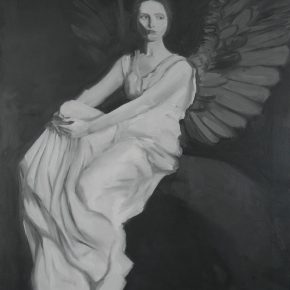 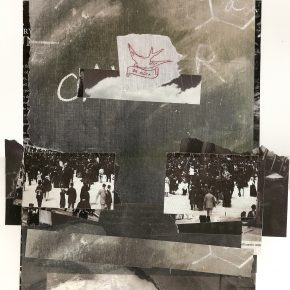 Portrait as Narrative and Narrative as Portrait, featuring the work of Jethro Gillespie, Andrew Ballsteadt and Rebecca Pletsch opens at Utah Arts & Museum’s Alice Galleryin Salt Lake on February 15 and continues through March 30. You can view more of Rebecca Pletsch’s work at rebeccapletsch.com. An article featuring Andrew Ballstaedt appeared in the January 2013 edition of 15 Bytes.