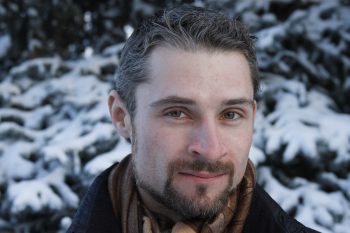 A fixture in the local theater scene and beyond, Bennett is currently working on a new play from which we excerpt here a monologue.

We go back to her musty basement apartment and she apologizes for the ankle-deep elm leaves on her porch as I crunch through them. She drops her cigarette in a Mason jar and sweeps the leaves aside with her boots and tells me about the time she saw an ethereal black mist in her bedroom in the summer of 2011. How the radio on her window sill cranked up to volume 10 by itself and she sprinted out of her parents’ house. I can hear coughing inside and when we walk in her roommate Marcella and eight friends are smoking a glass bhang with “Sugar” written on the tube part in a permanent green cursive. Amberlie does the introductions and everyone seems to nod at me suspiciously under their beanies. I’d smelled pot before but never breathed it. I panic inside, wondering if Amberlie wants to join in and Marcella says they can “load another bowl.” But Amberlie declines.

“Come on,” she says, leading me by the hand to a bedroom, her palm impossibly soft against mine. I never lotion.

She shuts the door. Stuffs a towel across the bottom.

“Sorry ’bout that.” I shrug. She drops her backpack and syncs her smartphone with a speaker that’s a neon yellow cat head, a cartoon one, and then I can hear fingers on guitar strings, sliding, slow. I don’t know the singer… I don’t know anything about music, but in four measures, I know Amberlie Short is more complicated than I ever thought.

Humbly, I look up and down her long narrow bedroom with painted-white paneling. She’s way more feminine than me, that’s for sure. On a chest of drawers is like a million tubes of lipstick, lined up from cherry red to Voodoo; there’s a filigreed standing mirror leaning against the wall, sticky with hairspray at the top; on a shelf sits a statuette of an Egyptian goddess, curvy and wingèd and unashamed; there’s a closet bulging with halter-tops and sassy dresses and a sheer nightgown, sea-foam green; she has a coffee-table book called Women in Science; she has a quote from Marie Curie tacked to the wall: “Have no fear of perfection; you’ll never reach it”; she has a purple vibrator and lube on the bed-stand, half-wrapped in a towel—which makes me study the glow-in-dark stars on the ceiling and Cassiopeia.

“Cop a squat,” she says and pats the bedspread. I put down my book bag and sit next to her.

I ask her, “What if your parents came by right now?”

“What if they did?” she smiles crookedly.

“Would they care? About your roommates?” I ask her.

Amberlie snorts: “I caught my parents smoking ‘Js’ in the garage when I was in pigtails. If my dad swung by, he’d probably join them and play his fucking drums.”

I blink at her. “Was that hard? Your mom and dad doing drugs?”

She smooshes her glossy lips together: “Never thought about it.”

I process that as Amberlie scoots back and spreads out on her bed. I’ve never sat on a bed with a friend, or lain on one, and I wonder what the etiquette is. I stay upright.

She laughs. “Are you,” she twinkles at me, and I get this upwell of anger—despite myself. ‘Cause even with my issues, even though I’d auctioned off my virginity on a couch out of wedlock, a part of me still needs this future where I marry Bradley Hess in the temple and have three plucky children and Stain-Master carpet and kneel together for prayer and read Luke on Christmas Eve. So I say to her, almost seething, “Yes, I am.”

She goes, “OK. Your path is your path—as long as you want to be on it.” I tell her thanks, too forcefully. But she only stretches, exposing her midriff unselfconsciously, and watches me.

I gaze over at the Egyptian goddess. “Do you pray to her?”

She ponders awhile. “I don’t literally believe there’s a deity somewhere whose name has two syllables and we somehow know them and they’re ‘Isis.’ It’s more like…I believe in a feminine power that runs through creation. And a masculine power. I guess a Mormon would call them ‘Heavenly Parents’? Except I don’t think they’re people.”

I say, “You believe in gods but you don’t think they’re people?”

I study the statuette. The long copper-colored legs. “What do you think they are? What do you mean by ‘powers’?”

Amberlie yawns. “I mean, we’re made up of other stuff, yeah? The statue comes from clay and we come from clay. Our cells come from chemicals in the soil and they’re filled with rain and salt. All the plants breathe out oxygen, we breathe it in. The electrons, pew pew pew in our brains, they come from outside. The photons!—released from reactions in our muscles—come from the sun.” She wriggles over and takes my hand. She puts it—gently—on her breastbone, watching for the tiniest change in my expression. But my face freezes. I think. I leave my hand where she puts it. “You feel that?” she says. “The heat? That’s the sun. Ultimately. It’s only me for a very short time. So there’s us, and the stuff of the universe, which we borrow. I think the God and Goddess are the stuff.”

As she says that I feel the U-shape notch at the base of her throat. She lets me.