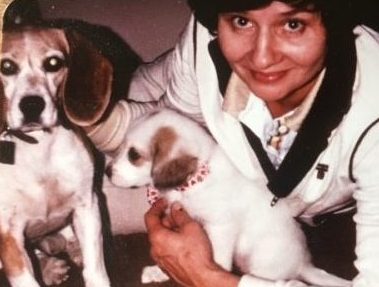 Jeri Parker: Looking for Whippet in 1989

READ LOCAL SUNDAY is your glimpse into the working minds and hearts of Utah’s literary writers. 15 Bytes regularly offers works-in-progress and/or recently published work by some of the state’s most celebrated and promising writers of fiction, poetry, literary nonfiction and memoir.

Today we feature Salt Lake City-based Jeri Parker. Winner of last year’s 15 Bytes Book Award for her novel Unmoored, Jeri is an artist as well as a writer. She has paintings in private and public collections in Paris, Athens, Frankfurt, Istanbul, London, Sydney, and more than half of the states. She is presently co-owner of Wildflowers Bed and Breakfast and … an avid dog lover. A contributor to the newly released Dharma of Dogs, edited by Tami Simon, Jeri’s essay “Lost Dog” is excerpted below.

excerpt from “Lost Dog”
in The Dharma of Dogs (Sounds True Publishing, 2017)
by Jeri Parker

Dogs, I think. I wonder when they appeared. They would have roamed these mountains in wild packs thousands of years ago.

I brought Whippit here to my cabin from the city and a fenced back yard. I introduced her to wildness, to danger. And bliss. But I’d failed to keep her from harm’s way. My sense of responsibility for her safety, for her life, falls over me like a second skin. I fly back to my feet and I run hard now, calling, creating a grid in my mind. I work the upper acres and then drop down.

I’m expecting her to pop up every minute. I’m startled that she doesn’t come, and I scan near, far out, and suddenly I’m inside-out with fear.

“I’ll find you,” I murmur as the trees go by. “I’ll find you, Whippet,” and I know I’ll never stop looking. I see in my mind what a wolf can do to a dog and I run back to Pat’s. “Could I borrow your truck?” I ask, flat out, a note of desperation in my voice.
“Come on,” she says, “let’s drive around and look for her. I know we’ll see her right off.”

This wispy dog is my access to calm and I try to get back to that calm as we drive along Stamp Meadows Road, the old logging route. I call her spirit to me, see myself up on the high bed with her, and I’m calling and calling and she doesn’t come. I think of the joy in her and I miss it. I have those two things about me all the time when I’m with her—the calmness of the Whippet and the joy in her. I know suddenly how long it will be before my own heart leaps up in joy if she stays out there in the forest—part of the food chain herself now, unequipped since I’d taken away her independence. I’d made her subservient to my judgment. I hadn’t ever thought that that’s what we’re doing with our household pets.

That’s when the bargaining started. Great Spirit, let me have her back, I murmur. I’ll understand my part in it—let me have her again. And I see her coming back, tired, relieved, and me lifting her to the bed. And she curls along my back and I’m able to sleep.

I stretched out on the bed for a minute when I get back to the cabin. I woke hours later with a start. It was dark and I was crying and I’m back to walking the pitch black forest, calling out “Whippet, I’m sorry. Whippet, come home.”

I call my friend Cill the next morning. “Can you come up early?” I ask. My voice catches. She’s a nurse, she can’t just walk off the job. But she does manage it; she’ll be up right away, she tells me. I go outside and do my Indian prayer—arms outstretched. I feel in a different way what I have to be grateful for.

It’s a five-hour drive for Cill. I walk in the forest the whole five hours. I think Whippet is close—just mixed up. When I come back to the cabin, Cill’s big Plymouth van is in the driveway. Okay, we say, let’s make a plan. We get out a map. I pencil in where I’ve been. “Let’s go to places you’ve taken her,” Cill says. We drive for hours, putting up rudimentary posters I’d made. Pat agrees to be the command post—she’s the one with a phone.

Stamp Meadows Road is a dustbowl now. The trucks and fishermen have gone up and down it all summer and they’ve left about five inches of powder on it. We go back out there over and over and stop whenever we see anyone. “She chased a white one-ton,” one of the sawyers tells me. Cill’s truck is white and Wippet is well acquainted with it. My throat catches. I feel light headed.

We look until the dark obliterates everything. We go into Island Park Lodge for a late dinner. The waitress tells me she’d lost her husband and then she’d lost her dog and there was no difference in the emptiness. This bridge between us comforts me profoundly.

The third day is indistinguishable from the second. On the fourth day, a kind of peace falls over me. Whippet isn’t hating every minute, I say to myself. She’s stopping by the creek, lying down, feeling the cool breeze stir her fur. She looks up at Sawtell at sunset. If she dies out there, Sawtell is a tombstone to make the pharaohs jealous. I relax.

“We’ll have to be careful not to make her a folk dog when we find her,” I tell Cill in the morning. And I go on, thinking aloud. “There’s a certain comfort in knowing she isn’t doing to herself what we’re doing—she isn’t going through the reasoning why. Maybe we shouldn’t be trying to second guess her. There doesn’t seem to be any pattern.” I think that over. “Unless—you know, it looks like she’s gone to all the places I took her. Why didn’t I see that.

Day one—Bart sees her on that first little dip in the road leading away from the mill and back to the highway. Next sighting—she’s continuing on that road, she’s traveled two or three miles. Next sighting, it’s Friday, she’s in there on the logging roads at 9:00 and at 11:30. And that’s where she is at 6:00. That’s where the loggers offered her a peanut butter sandwich. That area accounts for the second, third, fourth, fifth, and sixth sighting.

We’d been back to that spot fifty times. The guys that were stripping out lodge poles in there knew us by name now. That’s where we got the weak on her legs report. She was further up the road at 6:15 that third evening. Then she was back closer to the mill when Bart saw her at 3:30 Friday. The beginning of the wild and furious Labor Day weekend. Then she was over by Island Park Lodge Saturday evening and Sunday at 8:00, 8:30, 10:00. Then she went to Lee Swaner’s cabin on the North Fork—we walked in there all the time. That same day she went up the hill—she’d have to be crossing the highway constantly—and she went to Janet’s cabin. I’d taken her there the week before.

Cill says “And Sunday she went to church.”

“That’s right,” I laugh. She was at the church on Sunday. Had I had her there? And then we didn’t hear anything for a while.

I can’t let myself think how often she darted across that highway with its restless tourists driving too fast.

“This is the story of a lost dog,” I say to Cill. “It goes like most lost dog stories. They saw her but we didn’t then they saw her again but we didn’t. Then no one saw her for quite a while and we thought she was gone. Then they saw her again but we didn’t.”
This went on for five days—not a very long time really, but it involves 120 hours—each with more minutes in it that than the one before. Half of them are unlit by daylight—simple physics but hard on the heart. It extended to twenty-two sightings—the most interesting of which went like this. “Where were you yesterday, Parker. I tried to call you for three hours. Your dog went over to that sign you put up at the church and laid down under it just like she could read.” She was the only dog I ever had who could have learned to read.

I’d had dogs from the time I was born. I always think of myself as a serious dog lover, not a slacker, but I’ve crossed over this time. And I sit out on the deck in the sun and think of my dogs: Mike, the Springer Spaniel I had as a little girl. Ginger, our beautiful golden Chesapeake—there’s a dog who got lost too. Blackie, the dog my father abandoned on a country road, the hardest to remember. Tami, the dog I drove to Montreal, packed in ice to keep cool. Mouse, who ate the shoes off my boyfriends when I had them distracted. And Sadie, the little beagle, the delight of my first days in Utah. And then Whippet. They’d all offered unconditional love, trained me in what it was to have their companionship, gave me access to how they understood day, night, summer, winter—nature itself. As well as the human heart.
“Let’s go fishing,” I say to Cill on the last day. We go to Coffee Pot. I’ve finally got so I’m not scanning every square inch of forest. We stand in the cool water and cast our lines and a little sense of normalcy returns. It’s such a beautiful world. When we get back to the cabin, I tell Cill I’m through looking. If someone called and said they had her right now, I wouldn’t go after her.

The phone rang. “We’ve got her. She’s at Island Park Lodge.”

We grab the car keys. We don’t take jackets or purses or anything. We know how fast this dog moves. When we get there I run into the lodge. “My dog…?”

“She’s right up there on that hill, hon,” the waitress says. She’s seen us in here often for breakfast. She’s the one who told me I lost my son and then I lost my dog and it was the same emptiness.

I run out to tell Cill, and I see her up on the hill. She’s kneeling and that crazy white dog, the white Whippet is in her arms. I run as though she might disappear again and then I have her bony little body in my arms and I put my face down in that dusty fur and think of the trees and the river and the roads and the gentle people and I love having this little shaman, this dog. 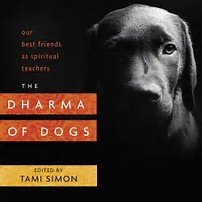 Jeri Parker grew up in southeast Idaho, spending summers with her grandparents at a sawmill that was a few mills from Yellowstone National Park. She later returned to this spot in the Centennial Mountains and built her own cabin of foraged materials. She still returns for part of the year, writing at an old desk beside a window in the loft. She is the author of Unmoored; she is the author of the nonfiction work A Thousand Voices. In addition to her winning the 15 Bytes Book Award in 2016 she has won first-place prizes from the Utah Arts Council and the Henry’s Fork Foundation in Idaho.