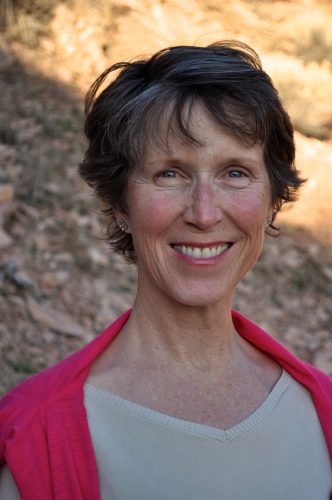 For today’s installment of READ LOCAL SUNDAY we feature Kamas-based author and editor Barbara Richardson, winner  of the 15 Bytes inaugural Book Award in fiction for her novel Tributary. Most recently the editor of a collection of essays by environmental writers on the subject of “dirt,” she returns here to fiction with this excerpt from her latest project, a novel manuscript titled “Innermountain” which follows the lives of students and staff at the now-shuttered Intermountain Indian School during the 1970-71 school year.

from “Innermountain,” by Barbara Richardson

There was a secret behind Royetta Yazzie’s smile. A secret no one knew. The fuel for her courage and success at Intermountain Indian School. In Diné, Intermountain means “inside the mountain.” She had imagined the worst back home. She’d been crying for a week when her parents put her on the bus north. She could not sleep wondering how she or anyone could study inside a mountain. Too cold, too dark, too solid, no air, no sun. Terrified by the time she arrived, Royetta felt a shock of relief seeing the boarding school campus stretch out broad and green. Having the mountain at her shoulder and sunshine all around. She felt gratitude running its trails, walking the long paths between classes, coming and going in the town of Brigham City as she pleased. Royetta expanded. She advanced. She excelled at everything. She smiled because she was not locked inside a mountain like a beetle or a snake. It was true, it took some actual world-shaking event to bring that smile on in full. But her inner smile produced a half-smile on the outside. The mysterious smile that turned Eddie Clah’s willpower into goo.

Royetta’s dorm dad, one of the few male attendants, bragged all over campus when she sewed her own prom dress. Like he knew good stitching. But on the night of the first fall dance, that dress was a lemon chiffon wonder. Eddie watched it flow down the stairs and into the gymnasium and forgot all about everyone else. Royetta moved like one of the Supremes.

“She’s a good guy,” his friend Leroy said, and laughed, sharp as a blade. Sharp and sour. “Get an eye full,” he said. “This is the only time you’ll ever see Roy out of that old corduroy jacket or her gym shorts.”

Royetta’s neck, that bare neck under a full French twist with every strand of black hair swept up in one curve, made Eddie dizzy. He managed to lean against the crepe papered gym bleachers without tearing the whole place down just to watch Royetta move around the echoing gym.

All the boys kept to the corners. A few girls danced with other girls. The vast floor stood empty because Navajos who were not married and didn’t share a clan could not touch. It was forbidden. The rez covered 27,000 square miles. You were lucky to know a half-dozen kids at Innermountain who belonged to your clan. Of course, in private, plenty of hanky panky went on. But public hanky panky would not fly. The coaches, oblivious to Diné social codes, had lined the students up in gym class—boys across from girls—paired them up and called the shots. Square dance. Fox trot. Two step. “Now, take your partner’s hand.” But it didn’t happen. No matter how hard they tried.

Which made this crowded prom an anti-dance. With music and lots of glitter. Until Royetta in her lemon dress walked over to Gilbert, Gilbert Nez, non-athletic Gilbert, Gilbert who never once ever mentioned a girl, doe-eyed Gil, and took his hand and they took the floor. Took Eddie’s breath away. Took the stares of every person standing on the hardwood floor. The smiles of the administrators and teachers. The gratitude of the white DJ who played Sam Cooke’s “That’s Where It’s At.”

Royetta didn’t let Gil embrace her. Not that he tried. She led him in a weird in-and-out sashay sort of movement with her hands. Like boats on an ocean rocking. Sleepy, anchored boats. Gil would not move his feet. His arms seemed willing to explore the possibilities. He kept his big eyes cast down like he was listening intently.

The spotlight carved them in electric silhouette. Eddie saw a hundred white blades surrounding them.

No one moved in that room except Royetta and Gil. She shook her hair until a hank came loose. She sank into her knees and smoothed that one-two-three all over the tiny space they occupied in time together.

Eddie spent the weirdest two minutes and thirty-eight seconds of his life in abject confusion. “With someone you love so—” How could she love Gilbert? She even had tears in her eyes when the music stopped.

But Royetta did not love his friend Gilbert. Royetta Yazzie loved moving to music. No matter who was watching. No matter which adults wanted what. And she could dance with Gilbert. Her cousin Gil had ridden sheep with her, playing rodeo, taking spills, when no adults could see them and tell them to stop, up on Lukachukai Mountain. The towering ch’ó  tore the sky as they fell into the dirt laughing. The sheep only moved a few feet off and waited for their next try. She could touch Gil. She could rely on him to try and try again. They’d cleaned their dirty hands and faces at the springs where Changing Woman danced with the livers of every slain foe her son Monster Slayer had killed. Springs emerged wherever they touched. When Royetta danced to Sam Cooke, she felt the cool springs in her arms. She smelled pink dust. She saw the limbs of the tall, free ch’ó reaching over her. Their gentling shadows. Stiff needles and gnarled trunks.

Which made her cry. And long for home. And exit the echoing auditorium to find freedom in the black, October night.

Royetta ran. Yellow dress forgotten. Pointy shoes clopping. She ducked through a breach in the bushes surrounding the cemetery northeast of school. She leaned against her shade tree. Kicked her shoes away. Shook out her hair. The ch’ó were smaller here. Trim and strangely blue, planted by settlers. Settlers who had not displaced The People but some people—the Ute? the Shoshone?—in order to take this land. To die in this spot. To lie among pines and spruces with a hushed mountain guarding the eastern sky. What star was rising up over that mountain? She did not know it.

Royetta let spill all her tears, and the tears throbbed with questions. Who are you when you aren’t where you belong? What is my family doing right now? How can they abandon me to this?

She felt marooned, bereft, unable to recognize herself, a wash whose willows have all been stripped away by flood. The Bilagáanas called it homesickness. She was never sick at home—at home her parents instructed her. The sun knew her, the red cactus bloomed in the yard, the scrub jays and chickadees and sparrows sang while her sisters ground corn in the shade of the tamarisks. It was here at Innermountain that the bleak, sick fears took hold. Royetta could choose. She could trade life with her beloved family for friends thrown together by schedules and schemes for advancement, one above the rest. She could get a job. She might find a way to college. But climbing a rickety ladder into space—it could not come to much. It would not feed her spirit deeply or serve her people as her parents had said it would. That’s what tore her heart. Who better than dead Bilagáanas to receive her sorrow? At least their ladders were all down. 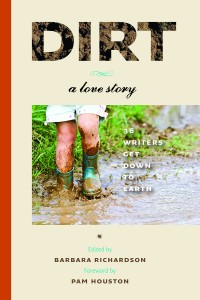 Barbara Richardson has an MFA in poetry and a deep devotion to novel writing. Her second novel, Tributary, winner of the 15 Bytes Book Award, also won the 2013 Utah Book Award in Fiction. Her anthology Dirt: A Love Story, with original essays by Linda Hogan, Peter Heller, and Pam Houston, won a 2016 Silver Nautilus Award. Richardson writes and edits in the Wasatch Back.