RDT’s Emerge Brings New Works by the Company and Others 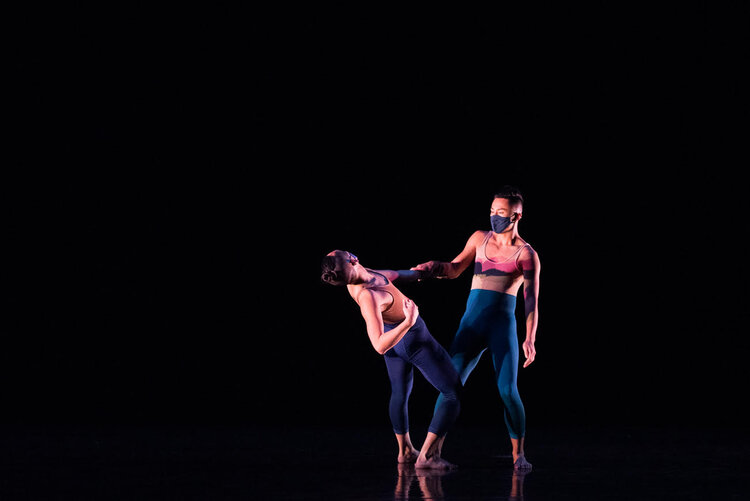 Jon Kim and Daniel Do, photo by Sharon Kain

A stunning opening to the evening was Odes, choreographed by Rebecca Aneloski. The original sound score composed by Michael Wall had a pulsating meditative drive throughout the work. On a minimally-lit stage, the piece developed seamlessly, shifting between solos and duets performed by the dancers. The first duet between Daniel Do and Jonathan Kim exhibited beautifully intricate partner work. In a delicate yet captivatingly powerful manner, their bodies appeared to weave between and around one another hypnotically. This duet transitioned into an enthralling and powerful solo performed by Do which swiftly led to a dynamic solo from Kim. After another mesmerizing duet performance by Kim and Ursula Perry, the piece finished with a solo danced by Perry, accompanied by an instrumental version of “America the Beautiful.” This suddenly gave the piece an entirely different meaning for me, one that was slightly ominous.  I couldn’t help but notice the chilling connotation attached to the song in light of the current political moment.

Solace was a duet choreographed by Lauren Curley and featured more beautiful partner work between Do and Kim.  The piece begins with a subtle golden light illuminating the dark stage, which looks like a black void when viewing the piece through a screen. Slowly, the lights brighten to reveal more of the surrounding space.  The camera angle shifts throughout the piece, offering new perspectives of the human architecture morphing and transmuting on stage.  Do and Kim danced with stunning strength and compatibility. Their connection was palpable.

The moving camera angles continued to offer unique perspectives of Dusk Fades, a solo choreographed by Kim and performed by guest dancer Kerry McCrackin. The sound score begins with exciting string music and is accompanied by frenzied arm tosses and giant strides across the stage.  The music transitions into a mediative soundscape punctuated by the sound of ocean waves. The dancing takes on a suppler quality. This shift in sound and movement quality is paralleled by the shift in the lighting design from bright oranges and reds to deep purples and blues. All of these components culminate in the emulation of a sunset. 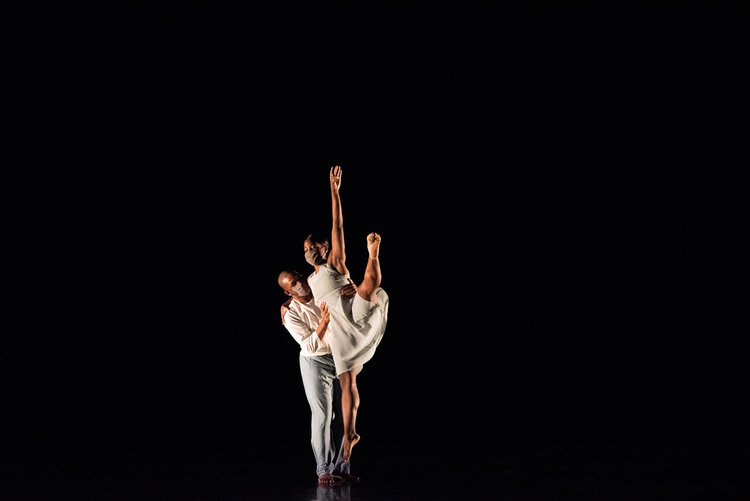 One By One was a series of seven solos created for each company member by Jaclyn Brown. Carefully crafted with the dancers’ individuality in mind, the solos take us on a journey revealing the unique qualities possessed by each of the dancers. The solos were performed to live accompaniment by musical artist Nate Anderson, who played a variety of exciting electronic music.

Knowhere was choreographed by company member Dan Higgins and danced by Ursula Perry, Kareem Lewis, and Elle Johansen.  The partnerships were in a constant state of flux throughout the work. The trio morphed seamlessly into separate duets, solos and reassembled again as a trio.  The soundscape mimicked atmospheric/space sounds that appeared to be embodied by the orbiting pathways taken by the dancers.  I couldn’t help but wonder whether the title of the work was reflecting upon these cosmic themes.

Space in Sonder was a duet choreographed by Daniel Do and Edromar Undag. The performers Jaclyn Brown and Ursula Perry have danced together as company members since 2014. The longevity of their relationship as fellow dancers showed in their unwavering synchronicity. The partner work in this piece was beautifully balanced and powerful.

Nicholas Cendese, artistic associate and development director of RDT, was the choreographer of the final piece, Another Day in Quarantine.  The four-part theatrical work included a solo, trio, duet, and group dance all performed to songs by Dorris Day.  Each segment reflected in some manner upon the experiences of Americans in self-isolation over this past year. The piece was a fun and light-hearted end to the show.

Despite the turbulent year all performing artists and audiences have experienced, the silver lining of it all is perhaps the novel ways in which art is being dispersed and consumed. Though nothing will quite beat the live experience of concert dance, virtual performances, I’d argue, do have their perks. As a viewer, you are provided with an entirely new perspective of the action unfolding on stage. The point of view offered by the camera in this year’s presentation of Emerge shifts continuously, offering insights into the performance that were never available before.

Tickets to Emerge are still available on RDT’s website. Ticketholders are granted access to the performance via a personalized link that expires within a week.