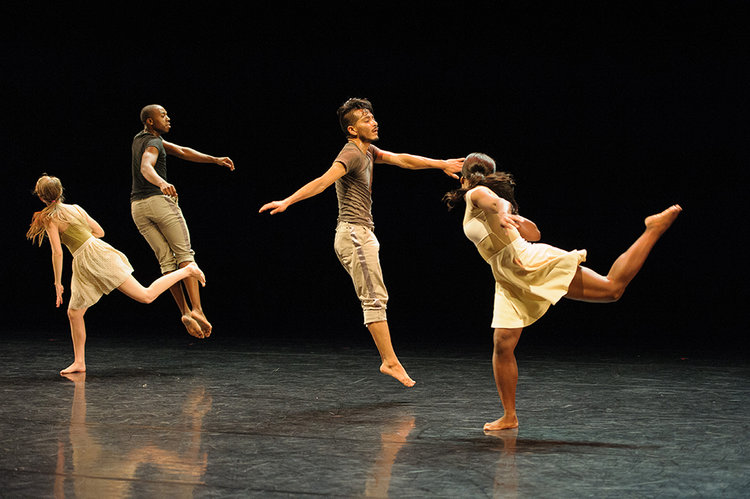 “By the Snake” courtesy RDT

Repertory Dance Theatre’s season opener, Élan, was an eclectic evening of dance which opened with “Handsfree,” a piece commissioned for Britain’s National Youth Orchestra in 2012. The piece tasks performers with creating rhythms by clapping, stamping, singing and beat-boxing, and RDT’s version draws on the talents of both the company dancers and Utah Youth Orchestras, as directed by Barbara Scowcroft. RDT has a rich history of both serving and bridging community, and in this piece it is endearing to see the young people in our valley up on the big stage. To see RDT moving among untrained bodies highlights just how much is both trained in, and trained out, of a modern dancer. New personalities were revealed on the stage, ranging from the shy and indifferent to those charged with megawatts of passion and zeal. While this piece was markedly different from the rest of the program, it surely exposed new audiences to both the company and the practice of modern dance, and it was uplifting to see young people working together to create something memorable.

The next two pieces in Élan featured Gaga Technique, a movement sensibility developed by Israeli choreographer Ohad Naharin, of the Batsheva Dance Company. Gaga has dramatically risen in popularity and visibility in recent years and can be recognized by its open-jointed, three- dimensionality, as well as the often percussively-gestured, wild use of the body. Guest choreographers Noa Zuk and Danielle Agami have both danced with the Batsheva Dance Company, and while their individual works for RDT deal with different themes, they are both infused with a similar pulse—Gaga seems to be not only a way to approach the moving body but also a potential choreographic structure.

Zuk’s work, “By the Snake,” was commissioned in 2014 and in her words takes, “ideas and conventions from different traditions of dancing in couples and [develops] a new world from it.”  In this weekend’s performance, Efren Corado Garcia and Ursula Perry are the first of the three couples to take the stage, and appear as equals in their power and spontaneity. The sound score by Ohad Fishof gives the piece an abstracted coolness, and while it sometimes ventures into the grating and atonal sphere, it prevents the work from being prematurely sentimental. The piece has a nonlinear progression that is unexpected and refreshing—at one point it seems to be ending but new life is found with quick and nuanced traveling phrases. The six dancers do well with this physicality and it gives one pause to think of the diverse movement styles that are required when being part of this company. Last season they restaged works from the Limon technique, and now they are submerging in the vastly different world of Gaga.

This summer, while creating the evening’s next piece, “Theatre,” and teaching at RDT’s Summerdance, Agami brought her Los Angeles-based company Ate9 to Salt Lake City to perform for a night in the Rose Wagner Blackbox. In that show, Agami’s “Exhibit b,” was a powerful and arresting exploration of conflict in Israel through explosive and yielding movement accompanied by a mix of hip-hop and traditional Iranian music. It was honest and developed, yet unexpected in structure and movement execution. Ate9’s second work, “Vickie,” was not as distilled but relied on the same structures and sensibilities.

At times, “Theatre” captured my relationship to both of the prior works by Ate9. Created for the full company, all eight dancers were clad in green uniforms, complete with athletic numbers. While there is no clear explanation for this decision, the costume choice certainly matches the athletic choreography. In this vein, Jaclyn Brown stands out as particularly grounded and precise. But, similar to the Ate9 Blackbox showing, the inclusion of two pieces relying on similar techniques and structures invites comparison. In the prior concert, “Exhibit b,” was the favorite and in this case it’s Zuk’s version of Gaga in “By the Snake,” which stands out as more fully-honed material.

The show concluded with “Filament,” a world premiere by RDT alumnus Andy Noble that departed from the Gaga aesthetic to utilize an ever-shifting set design to highlight our current relationship with real versus digital bodies. “Filament,” is a sentimental work, in contrast to the cold world often associated with technology, and features a tender and traditional duet danced by Lacie Scott and Tyler Orcutt. The lighting was remarkable, and some of the images created are breathtaking. At one point the stage is filled with black and white grids, completely transforming the space into something resembling a vast warehouse. Later in the piece Orcutt covers his digital image with his real image, prompting the screen to lift and reveal the “in the flesh” completion of the projection. The ending is climactic in a way that is familiar, but like a well-loved and watched movie, it is impossible to turn away.