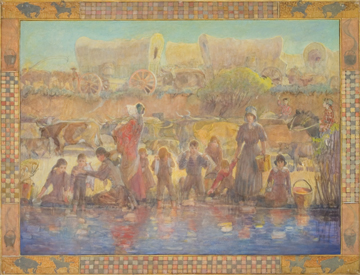 In this month’s edition of 15 Bytes, Ehren Clark reviewed Minerva Teichert: Pageants in Paint at Brigham Young University’s Museum of Art. Among the more than forty large works by Teichert in this exhibit are 5 seldom seen pieces that were recently donated to the museum by the Nelda C. and H. J. Lutcher Stark Foundation.

The western-themed narrative works were collected by Orange, Texas native H. J. Lutcher Stark between 1954 and 1961. These paintings hung in a private residence owned by Stark and have not been seen by the public for many years. The works are currently on long-term loan to the BYU Museum of Art and a total of 12 will be given to the museum over a number of years. Five of these murals are currently on view in the Pageants in Paint, which runs through May 26, 2008. 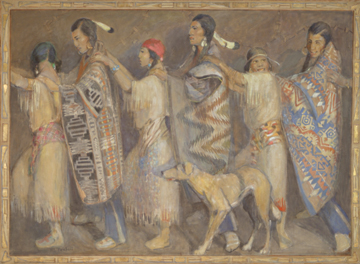 Stark was an avid collector of contemporary Southwestern painters and other important artists of the American West. His collection grew to include works by the Taos Society of Artists, George Catlin, Albert Bierstadt, Frederic Remington and C. M. Russell. In 1961, Stark and his wife established the Nelda C. and H. J. Lutcher Stark Foundation which seeks to improve the quality of life in Southeast Texas by encouraging, promoting and assisting education, the arts, and health and human services. “We are thrilled to welcome these works into our collection,” said BYU Museum of Art Director Campbell Gray. “The incredible generosity of the Stark Foundation has enabled us to strengthen our Teichert collection at a time when her work is becoming increasingly recognized in art historical circles and more popular among collectors.” “We are very pleased that Minerva Teichert’s paintings will have a home in the region that inspired her work. We know that the BYU Museum of Art will be an excellent steward for this collection,” Riedel said. 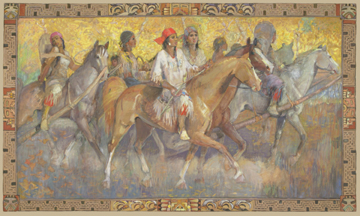 According to Marian Wardle, Museum of Art curator of American art, these works are an important addition to the museum’s collection because they represent a phase of Teichert’s career that has not been represented in the museum’s holdings. The majority of the works in the museum’s collection were painted when Teichert was selling through her Salt Lake City agent Alice Merrill Horne to a Utah-based audience who were primarily members of The Church of Jesus Christ of Latter-day Saints. The works in the Stark collection were painted after Horne’s death in 1948. After 1953, Teichert worked with a new agent, Edith Murrell in Laramie, Wyo., who began to promote Teichert’s work to collectors outside of Utah, including Stark.

“Minerva Teichert painted many of her religious works while she was selling through her agent Alice Merrill Horne. Even her western works from that period depicted an LDS view of Native Americans based on teachings in the Book of Mormon,” Wardle said. “But when she started selling her work through Edith Murrell, this new audience expected a certain kind of Native American or western image — the kind that was seen in the cinema.”

Teichert’s late paintings of the 1950s and 1960s clearly demonstrate a cinematic influence, Wardle says. “Compared to Teichert’s more static works of the 1930s, these works display a looser brushwork that represents increased action and calls up the fast-moving images on the motion picture screen.” 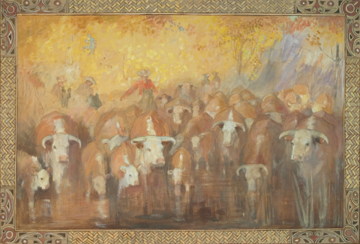 BYU began collecting Teichert works in the 1930s when the university purchased a number of Teichert murals through Horne. Later, Teichert struck a deal with the university to exchange paintings for the tuition of family members. In 1969, Teichert donated her Book of Mormon murals to the university after trying to place them herself following Horne’s death. The Teichert family donated a number of paintings from the Teichert family collection to the museum in 1997. In 2000, the Museum of Art purchased a 9-piece mural painted in the dinning room of Dr. Minnie Howard’s home in Pocatello, Idaho in 1918 through 1920 with the financial assistance of Amy T. Barker. In 2001, the museum purchased two western-themed paintings from the Stark Foundation with funds provided by Barker. Not including the donation from the Stark Foundation, the museum has 77 paintings and 58 drawings in its Teichert collection.

The images that appear in this article are: